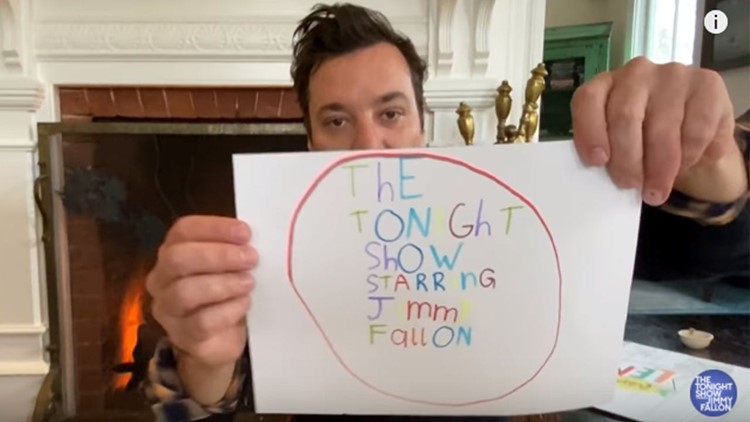 Jimmy Kimmel and Jimmy Fallon's kids are contributing to their dads' at-home late-night shows. During the most recent episodes of Jimmy Kimmel Live and The Tonight Show Starring Jimmy Fallon, the hosts have proudly used artwork made by their kids to open their shows.

Kimmel, who shares Billy, 2, and Jane, 5, with his wife, Molly McNearney, began his show with portraits of himself that were drawn by his kids.

He also featured a hand-written title card, and on Wednesdays JKL, explained how his family is keeping busy amid the quarantine due to the coronavirus outbreak.

"In our house right now, our five year old is taking online yoga and ballet classes. My wife is watching baking videos on Instagram. My two-year-old son is screaming 'diarrhea' and 'Spiderman has a penis' every two to three minutes. And I'm out here yelling into my iPad," he quipped. "Everyone's doing the best they can under the circumstances."

Meanwhile on The Tonight Show, Fallon's daughter, 6-year-old Winnie, showed off her artistic skills with a hand-made title card for her dad. She also helped out by writing the website for Meals on Wheels, the cause that Niall Horan was supporting during his appearance on the show.

During the episode, the camera even flashed over to show Winnie hard at work drawing as her dad filmed his program. Fallon and his wife, Nancy Juvonen, also have a 5-year-old daughter, Franny.

During previous at-home episodes of The Tonight Show, Fallon's daughters have adorably interrupted their dad's monologue and served as his band.

Watch the video below for more on late-night from home.