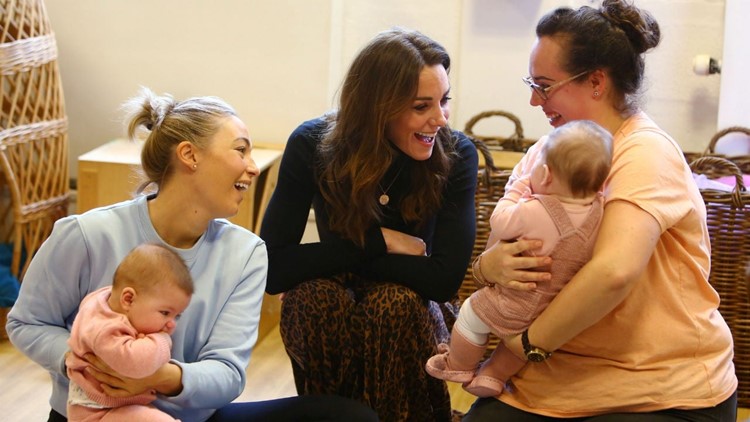 Kate Middleton is showing other young mothers they aren't alone! The 38-year-old Duchess of Cambridge visited the Ely and Careau Children's Centre in Cardiff, Wales, on Wednesday, where she spoke about the isolation she felt when Prince George (now 6) was a newborn baby.

"I was chatting to some of the mums. It was the first year and I'd just had George -- William was still working with search and rescue -- and we came up here and I had a tiny, tiny baby in the middle of Anglesey. It was so isolated, so cut off," she told other parents, according to royal reporters. "I didn't have any family around and [Prince William] was doing night shifts. So... if only I had had a center like this."

At the time, Kate and her husband, Prince William, were living in Wales where he was stationed with the Royal Air Force.

Kate made her appearance to promote her new mental health initiative, "5 Big Questions," a survey that helps people across the U.K. provide their view on raising children. The duchess wants to continue to focus on sparking conversation about early childhood to help future generations.

"I want to hear the key issues affecting our families and communities so I can focus my work on where it is needed most," Kate said of the initiative in a statement.

Kate was all smiles on her official appearance on Wednesday. For the busy day, she donned black heeled boots, a brown printed skirt, a black turtleneck sweater, and a camel-colored peacoat. She also interacted with children and sat in on a sensory class for young babies.