The Grand Rapids African American Museum and Archives (GRAAMA) will host or participate in several events, this month, to recognize and celebrate Black History Month. 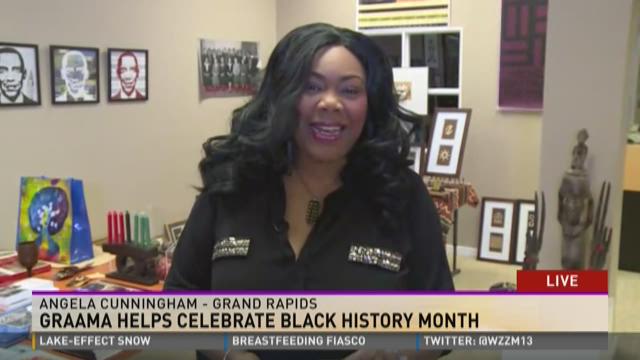 The Grand Rapids African American Museum and Archives (GRAAMA) will host or participate in several events, this month, to recognize and celebrate Black History Month.

The museum officially opened in its new space late last year. Founder, George Bayard, is excited to now be able to provide a place for people to immerse themselves in the culture during the month of February.

"One of the things we say at GRAAMA is we are celebrating Black History Month 12 months a year. It is going to be our duty to do so," said Bayard. "In Grand Rapids, there are plenty of stories and artifacts. We know we can fill a museum and this is only a stepping stone."

He calls it a stepping stone because, while grateful to have an exhibit space, the 87 Monroe Center Street location is still not a permanent one.

Bayard says "the next thing will be a bigger space somewhere in Grand Rapids. We are looking between 10,000 and 18,000 square feet, which will have a performance hall and permanent galleries for permanent exhibits and traveling exhibits and have an art gallery library and archives. All of the things a state of the art first class museum will have."

He says they look to The Smithsonian's National Museum of African American History and Culture, which recently opened in Washington D.C., as a model of what they'd like to accomplish, on a smaller scale.

"One of the things we have displayed is a poster series from the Smithsonian's museum. It is a pleasure to have them here. It is called "A Place For All People,"' because that is the story we want to tell folks too. That it is a place for all people to come here and feel that African American history is a part of American history," said Bayard.

Thursday, February 9th GRAAMA will showcase a Muhammad Ali Pop-up Display and Photo Exhibit. The event, from noon until five, is one of several events the museum has scheduled to celebrate Black History Month.

"Randy Finch, who was on the Food Network, is a master ice carver. We are going to have a whole Ali statue that's life-sized. Actually he said it is bigger than life-sized. It is of Ali standing over Sonny Liston. We hope to get a lot of responses. We also have a photo exhibit and artifacts from the local community to celebrate a long history of boxers in Grand Rapids. We will show items about the champ and some photos of his life in Michigan as you cast your vote for his sculpture," said Bayard.

Below are a list of some of the other events the museum is participating in:

February 11: What's Your History Worth? At GRAAMA 10:00am. GRAAMA has wanted to start a collectors club. This pulmonary session will share advice on collecting African American art, artifacts, books and dolls using items from its collection.

February 17: at 8 AM - 9:30 PM at GRAAMA (87 Monroe Center NW Grand Rapids, MI 49503) GRABB Breakfasts is a morning Chalk Talk and Development series for dreamers, makers, innovators, and current/aspiring business owners. This series not only brings together our city's Black talent but also creates an open space to connect and build relationships.

February 25: Tracing Your Roots. 10 a.m. at GRAAMA. This elementary genealogy class is for beginners who want to learn about their family history.