Mark Hamill tells Brent Ashcroft 'wait until it comes to cable' for Star Wars: The Rise of Skywalker

Ashcroft purchased 32 tickets to the movie for him and his Star Wars friends. Than he tweeted at Hamill saying, "This better be good." 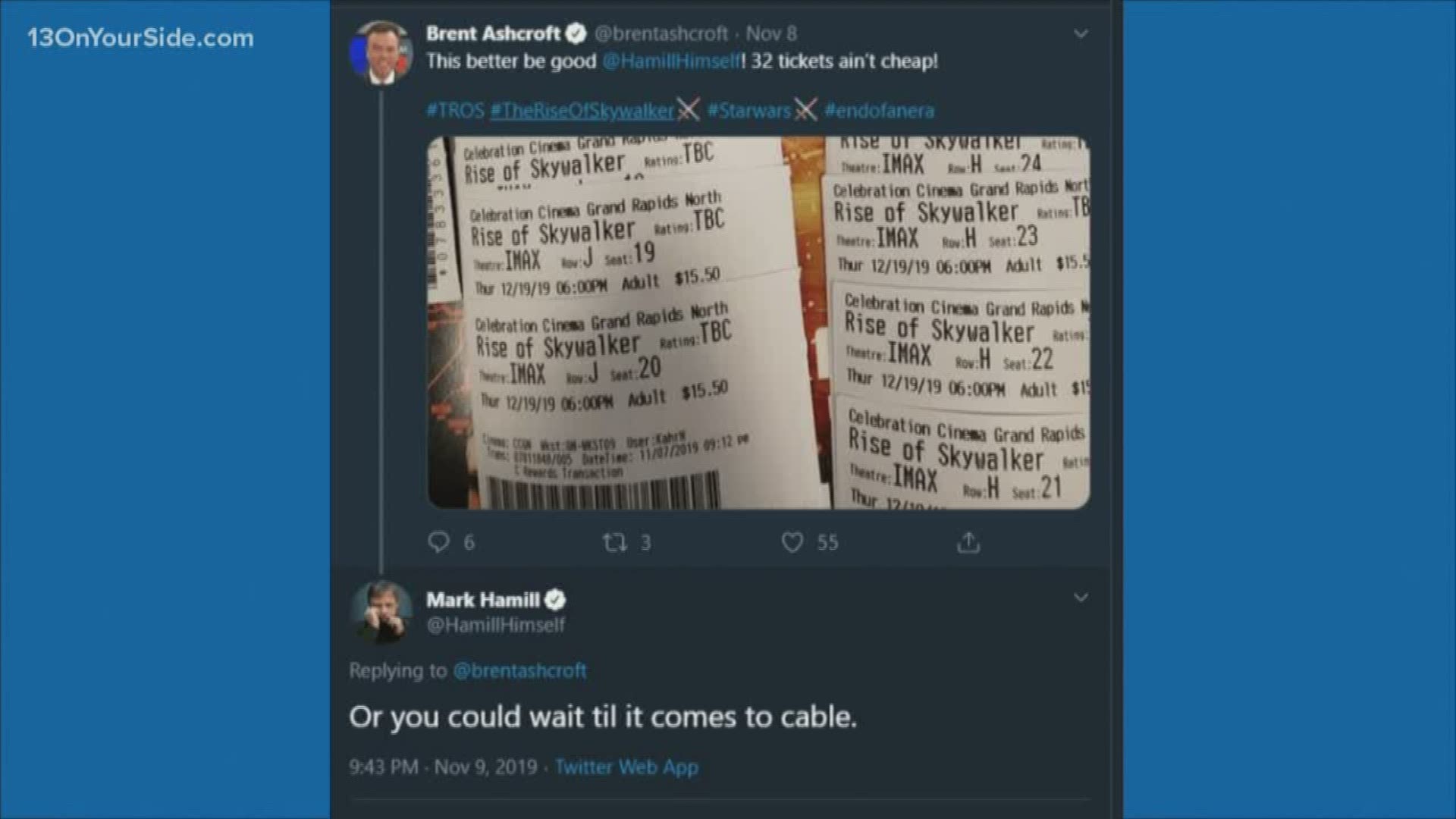 GRAND RAPIDS, Mich. — Star Wars actor Mark Hamill may not be so pleased with the next and final movie in the space saga.

"Star Wars: The Rise of Skywalker" is set to be released next month, so fans have already started purchasing tickets -- including 13 ON YOUR SIDE's Brent Ashcroft.

When Brent took to Twitter, tweeting at Hamill that the newest installation "better be good," Hamill's tweet back had some biting snark to it.

Brent purchased a whopping 32 tickets for he and all his Star Wars friends to go to the premiere of the movie on December 19.  The purchase wasn't cheap. Hamill responded saying, "Or you could wait til it comes to cable."

Stories and tweets have now been made about the dialogue just adding to the whirlwind of speculation surrounding the movie.

"It really stirred up a you-know-what storm because there is so much discussion about it right now, " Ashcroft said. "Honestly, I think his response to me was Mark Hamill just being Mark Hamill. He has a savagely funny personality, so I'm not putting much stock in him implying The Rise of Skywalker isn't worth seeing in theaters."

Hamill did respond to the stories on Twitter saying it was a joke and he knew no real Star Wars fan would wait for it on cable.

Ashcroft has a history with Hamill. Two years ago they teamed up for a Skype interview for Bo Velarde-Chan, a Make-a-Wish kid from Kalamazoo, who has an extremely rare illness called Microvillus Inclusion Disease.

During this story, Hamill started following Ashcroft on Twitter and the two have been tweeting and messaging about stories and Star Wars ever since. Ashcroft and Hamill also teamed up to use the force of social media to help a boy from Grandville dealing with heart defects win a Star Wars Lego competition.

"I tweet things and he will respond. At the very least he will like it, if I tag him," Ashcroft said. "It's just kinda neat. I've been a Star Wars fan since I was eight-years-old."

"Star Wars: The Rise of Skywalker" will premiere December 20, 2019. The movie, from director J.J. Abrams, will officially wrap up the Skywalker saga, which began 42 years ago.