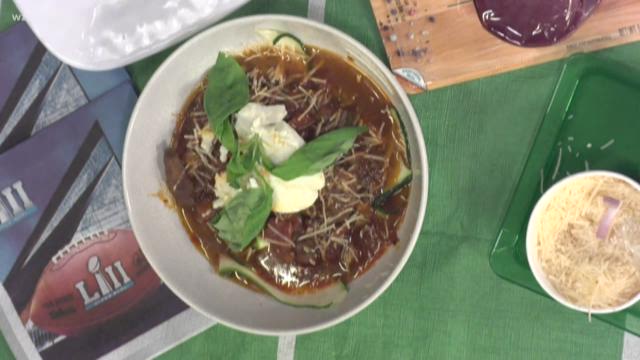 Here's what Gina has to say about it: "Jackfruit is becoming very trendy and it's a great meat alternative. I thought it would be great to show a healthier version of a pulled pork slider, just in time for the big game."

Jackfruit is the world's largest tree-borne fruit, sometimes weighing over 100 pounds. If you've ever seen it in the produce department, it's kind of ugly. It's green and shaped like a watermelon.

Jackfruit has a very unique texture -- when you think about fruit, you usually think about sweet dishes, but this fruit has a meat like texture and is used a lot to make savory dishes. Jackfruit can be purchased fresh and cut it up yourself, in a can and, but the easiest way is to buy it already seasoned.

Some stores now have pre-packaged pouches available with all the spices, including BBQ Jackfruit, Tex-Mex Jackfruit and Teriyaki Jackfruit in the refrigerated section of the produce department at Meijer. Simply open the pouch and heat up, super simple

This recipe is for BBQ Jackfruit Sliders with a BBQ Horsey Slaw. Gina makes her own horseradish sauce using horseradish root, which is a member of the mustard family. Of course, horseradish can be store bought -- but if you want to control the heat, make your own.

In a large bowl, whisk together all slaw ingredients except the cabbage. Once slaw sauce is well-incorporated, mix in cabbage. Cover and refrigerate until ready to assemble sliders.

Heat jackfruit according to package. Stir in bbq sauce, then remove from heat.

Cut all 12 rolls in half, horizontally (at one time, keeping the tops in tact and the bottoms in tact). Set the tops aside.

Place bottom rolls on a cutting board, then cover with the BBQ jackfruit mixture. Evenly spread slaw over jackfruit, then add the tops. Skewer each slider, then cut sliders apart.

Click here to link to Gina's blog for more recipes and entertaining tips!