West Catholic responded on their Facebook page saying, in part, "We are saddened and disappointed by her resignation, especially this close to the softball season." 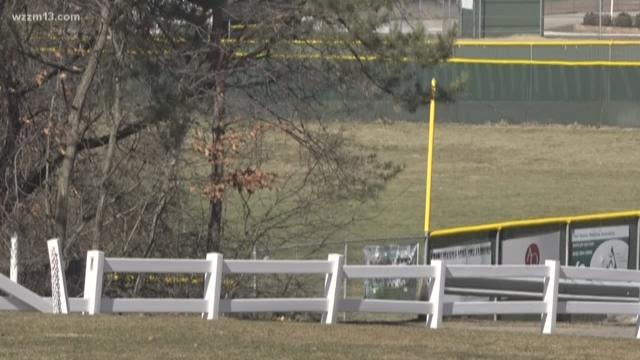 The varsity softball coach at West Catholic has resigned after five season with the Falcons.

Kristen Nelson posted on Facebook over the weekend that, "a parent concern regarding my personal life and relationship has started unpleasant conversations within the Roman Catholic Diocese of Grand Rapids."

Nelson said the school learned she was planning to marry her partner, Maria, and it was made clear to her through conversations with the leadership at West Catholic High School that both they and the Diocese teach a single view of marriage.

West Catholic responded on their Facebook page saying, in part, "We are saddened and disappointed by her resignation, especially this close to the softball season ... In Kristen's resignation letter, she indicated the Church teaches 'a single view of marriage.' She is correct, we do."

The school received a lot of backlash for their original post, seen here. Late Sunday, Feb. 25, the school posted again, this time starting by saying, "We apologize for the hurt and betrayal that was felt by our previous post. That was not the purpose of our posting. We merely wanted to communicate our side of the story as a Catholic institution, charged with teaching young people the Catholic faith." You can read the full post here.

The Diocese also provided WZZM 13 with this statement:

"As a mission of the Catholic Church, Catholic schools are places where students come to learn and know the Church’s teachings, one of which is the definition of marriage as a union between one man and one woman. For this reason, Catholic school administrators, teachers, or staff members that persist in public acts that are contrary to Catholic teachings disqualify themselves from the opportunity to continue in their leadership role within a Catholic school.Bishop Walkowiak is grateful to the leadership team of West Catholic High School for working with staff to ensure that the Catholic faith is presented in a way fully in accord with the teachings of the Catholic Church."

Nelson is a West Catholic graduate who played softball at St. Mary’s College in Indiana and then returned to serve a a coach at West Catholic across the past five seasons. She spent just one season as head coach, when she led the Falcons to a 16-15 record.

As her message made clear, Nelson’s biggest regret is that she can no longer feel comfortable and supported by the community that was so authentically her own.

"I am hurt and mostly disappointed that I will no longer be able to continue, but I hope you can understand that I simply cannot continue to work in an environment that refuses to support me. I know we have made some big plans for the program this year and I am very sorry that I will not be able to see through them. Please know that I wish the best for our players and I have no doubt they will have bright futures, both in softball and life.”

A meeting will be held Monday, Feb. 26, between school officials, members of the softball team and their parents to discuss plans going forward. It starts at 6 p.m.