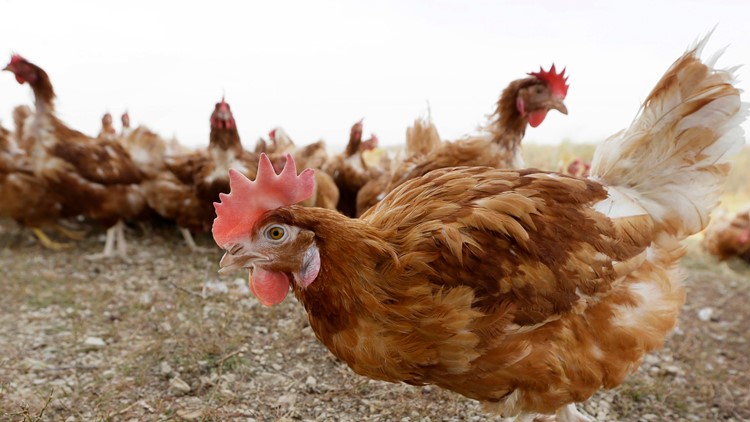 Photo by: AP
FILE - In this Oct. 21, 2015, file photo, cage-free chickens walk in a fenced pasture at an organic farm near Waukon, Iowa. Michigan would become the fifth state to require that egg-laying hens be housed in cage-free areas under legislation approved by the state House and backed as aligning farms with where the industry is headed. The main bill is part of a broader update of the state's animal industry law. It will soon go to Gov. Gretchen Whitmer.(AP Photo/Charlie Neibergall, File)

LANSING, Mich. — Michigan would become the fifth state to require that egg-laying hens be housed in cage-free areas under legislation approved by the state House on Wednesday.

The main bill, which is part of a broader update of the state's animal industry law, would change and delay confinement standards for hens.

Each hen currently must be confined in a 1-square-foot space by April under a 2009 law. The bill would instead require each egg-laying hen to be housed in a cage-free system before 2025.

"With the market moving, our law really needs to synchronize with the marketplace for the vitality of our egg farmers here in Michigan," said Allison Brink, executive director of Michigan Allied Poultry Industries. "The move from our current standard in law to a cage-free standard is really a complete overhaul of the system for our egg producers, which is why we need that time for our farms to convert to cage-free systems."

Large restaurant and grocery chains such as McDonald's, Walmart and Kroger have committed to buying only eggs from cage-free farms by 2025.

Brink said eight Michigan farms are spending more than $600 million to transition to cage-free hen houses that allow hens to engage in natural behaviors. About 8.5 million, or 56%, of hens currently live cage-free in a state that ranks sixth nationally in shell egg production. An additional 1 million hens, or 6%, will be cage-free by the end of 2020, according to the group.

The primary measure was passed by the Republican-led House 74-36, weeks after it won approval in the GOP-controlled Senate. The House changed the bill to mandate cage-free systems by the end of 2024, a year earlier than under the Senate version.

The amendment led the Humane Society of the United States to get behind the legislation.

"It would be a tremendous advancement forward for more than 15 million egg-laying hens," said Josh Balk, the group's vice president of farm animal protection. "Right now, most are confined in small cages. They're given less space than a sheet of paper to spend their entire life. They're unable to spread their wings and do basic behaviors like running around, perching, scratching, dust bathing and laying eggs in a nest."

A spokeswoman said Democratic Gov. Gretchen Whitmer was reviewing the legislation, which the Senate plans to finalize Thursday.

Business owners could not knowingly sell an egg that came from a farm with 3,000 or more egg-laying hens if they knew or should have known that the egg was produced by a hen that was confined in violation of standards. The state could go to court to stop violators, though they would not face criminal penalties.

Other states with cage-free laws include California, Washington, Massachusetts and Oregon.

The Michigan bills also would authorize the director of the state Department of Agriculture and Rural Development to issue emergency orders stopping the spread of animal diseases, streamline a law that has not seen a major update in nearly 20 years and bring more transparency to the roles and responsibilities of the state veterinarian.