"With everything that’s going on outside in the world, I remember saying, 'I wish I could stay pregnant.' At least I can keep the baby safe." 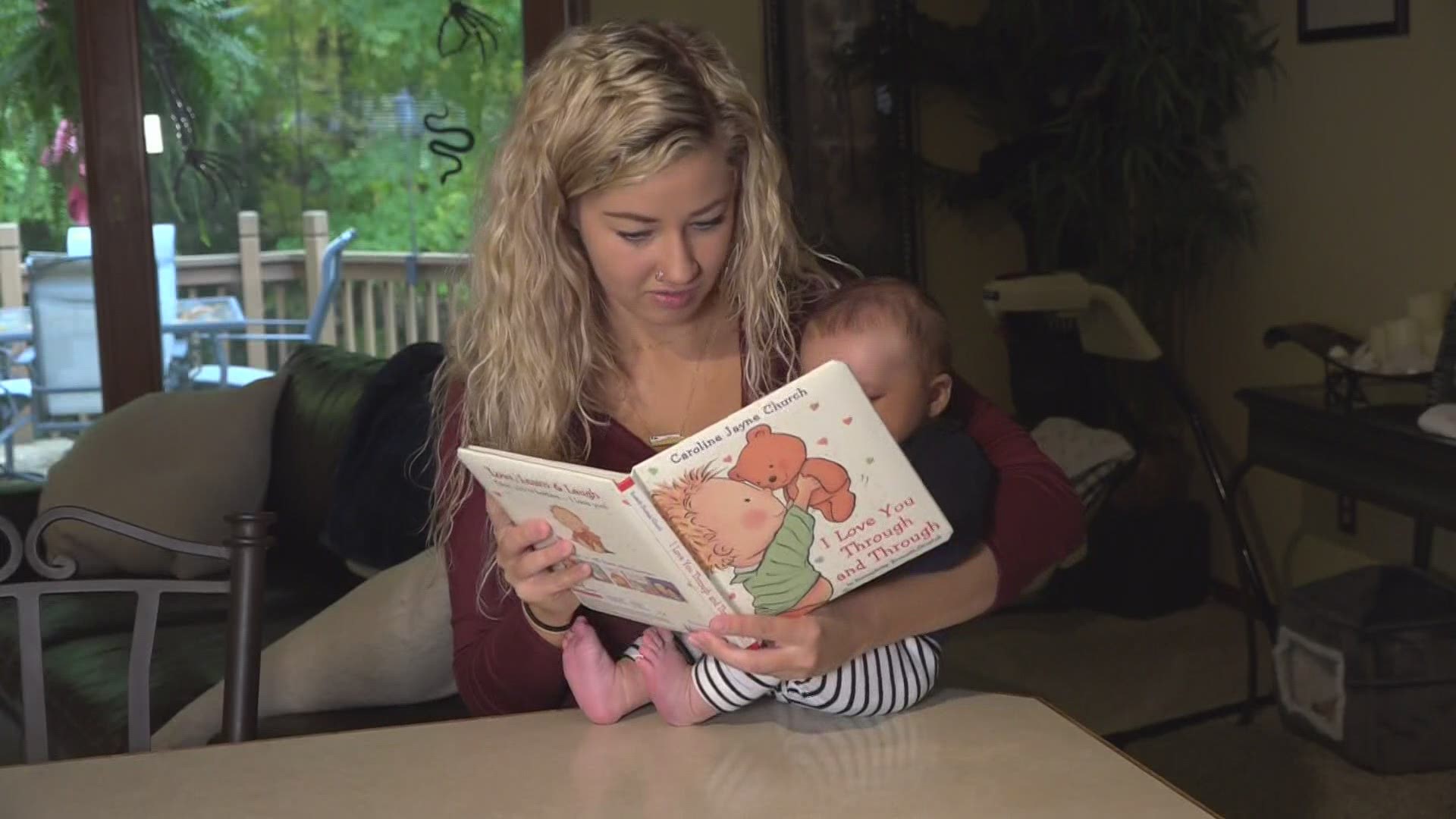 GRAND RAPIDS, Mich. — Having a new baby is typically a celebration. Family gathers, hugs are shared, and grandparents snuggle the newest members of their families.

However, this year, amidst a pandemic, that all changed.

Five West Michigan moms spoke with 13 ON YOUR SIDE and told us about their experience giving birth and being pregnant in 2020. It was a scary, uncertain time for many of them, as the world grappled with an uncharted time.

"There was so little research," said Ashley Hamel, who gave birth in May. "How it's transmitted, can you give it to the baby in utero?"

In the earlier months of the year, so much was unknown about COVID-19. Many of the women were in the height of their pregnancy or giving birth during statewide stay-at-home orders, and did not know what that meant for their child.

"It flipped a switch and became scary," said Caitlin Beyer. "What to expect? How is this going to affect him? What’s going down in the hospital? Am I going to be able to take birthing classes?"

Beyer gave birth to her son, Finnegan, in July. She found out she was pregnant in October, before the pandemic started. Once it did, Beyer said she was worried about bringing a baby into a world that is not normal. She was concerned about getting sick, passing the virus onto the baby, and what her doctors appointments would look like. Beyer is also a single mom, and was concerned about how alone she would be during pregnancy and birth.

"It was my first pregnancy, and my first child," said Beyer. "There wasn’t anyone there, I couldn’t have someone at the doctors with me to ask questions, or help me along, or be excited with me. The first ultrasound, I was by myself. I was the only one who got to see him on the ultrasound."

Her mother and father were able to be at the hospital with Beyer while she gave birth. She wore a mask, and had a COVID-19 test.

Her advice for women who are pregnant right now as cases spike, is to find and reach out to support systems.

Christian Newbern gave birth to her son, Y'asir, in September. The majority of her pregnancy was spent during the pandemic this year. When she was two months along with her son, the stay-at-home orders went into effect. That also meant Newbern was sent home from her job.

Newbern said when her father contracted COVID-19, she realized how serious of a threat the virus was to herself and her unborn child.

"At that point, I became worried," said Newbern, "I had already had miscarriages in the past. I didn't want that to be a reason why. I was just trying to pray and hope I didn’t catch it."

Newbern said her pregnancy was an emotional experience, heightened by what was happening in the world.

She also has a 9-year-old daughter. Newbern had hoped her daughter would be able to be at her doctor's appointments with her, but she was the only one allowed in the room. During delivery, she was allowed one person at the hospital with her, but it was challenging without her support system.

"It’s a must that I put my all in protecting my kids from this virus," said Newbern. "The virus doesn’t discriminate. It preys on anything vulnerable, and he’s very vulnerable at this point."

Newbern's advice for expecting mothers during the pandemic is to find someone to talk with to manage stress. She did counseling, and talked with her doctors during the pregnancy.

One of the biggest issues for mother's giving birth in 2020, is what to do with childcare for their older children. Meagen Coburn had her second child, Arlo, in April. At the time, travel restrictions were still in place in Michigan. If her husband was allowed to be in the delivery room with her, she wondered who would be able to watch her older son. Eventually, she and her husband had her parents come over while they were in the hospital, but they kept their distance.

"It sucks the air out of the room a little," said Coburn. "Because how can I not hug my parents when a grandbaby is coming?"

In April when she gave birth, Coburn said the hospital was not doing COVID-19 testing for everyone who walked in the door. That's because at the time, there were not enough tests. She spent nearly three hours in triage, as they waited for their delivery room to be thoroughly cleaned. Once in the room, she said the majority of the time she and her husband were alone. Hospital staff were trying to keep people separated.

Credit: Meagen Coburn
Meagen and her husband wore their masks while she gave birth to their son, Arlo.

"For actual delivery of my son, I had to have my baby through a mask," said Coburn. "So whenever anyone has any commentary about wearing masks, I’m like, I delivered a human wearing a mask. And if I can do that, I think we can wear them for the safety of everyone."

Now, nearly seven months after giving birth, Coburn said many of her friends and family have not met her son, Arlo. Many of those who have met him, did so through their screen doors. It was important to Coburn to be extra vigilant with social distancing, because Arlo's immune system was still developing.

"When you have a baby, it’s such a joy for everyone around you," said Coburn. "The whole adage it takes a village, and the whole village celebrates babies. And in 2020, I feel the village has to watch the baby from a screen or our glass door."

Jamee Kraai Bragg had her third child, Archer, in August. She and her husband were excited to have a third boy, but said this pregnancy came with a lot more anxiety than her first two.

"With our third, you kind of know what to expect," said Bragg. "But we definitely didn’t expect a pandemic. A lot more to be worried about."

Bragg said she wondered what delivery would look like, if her partner or visitors would be allowed at doctors appointments or in the hospital. She had hoped her two older sons would be able to meet their new baby brother at the hospital.

"It was a little disappointing," said Bragg, "You have it in your head an idea of what you have had in the past, or what you would like to have, and for all that to change."

Her advice for expecting mothers, take it one day at a time. She said follow the best practices and what the doctors say. Plus, focus on what someone can control, and what they can celebrate.

Ashley Hamel had her third child, Rylynn, in May. She was excited, as May was the month she wanted to give birth.

But soon, giving birth in May became a stressful time for Hamel, as the coronavirus spread throughout the United States.

"It was very upsetting," said Hamel. "Because we planned it out to probably be our last. I was in the mindset of enjoying every little second of the pregnancy. So to have the end of it be such a ball of stress, when it should have been such a happy time, was really stressful."

Hamel said her doctor's appointments became one-on-one, and she even had some phone appointments. She had so many questions about giving birth, even though it was her third pregnancy.

Some of her questions included: Could her doula be at the hospital? If her child is a boy, are they doing circumcisions because it is an elective surgery? Would she be sent home to labor because the hospital might need the beds?

"Getting a coronavirus test in the middle of labor," said Hamel. "So you go there, to get checked in, and you have to get swabbed. Which is super uncomfortable already, and you’re doing it in the middle of contractions."

Now, after her child's birth, one of her largest concerns is about vaccinations, as her new daughter has not had them yet. So, her family is very careful about letting others see Rylynn.

Her advice for pregnant women still to give birth this year is to do research, but don't obsess over it.

"You can totally do this," said Hamel. "Our bodies were meant for this. Despite all of the outside noise, you can still have a happy and healthy pregnancy, you just have to be smart about it."

For parental resources, and to connect with other West Michigan parents experiencing many of the same concerns this year, check out Mom's Bloom, Family Futures, Grand Rapids' Kids, and The Deborah House.