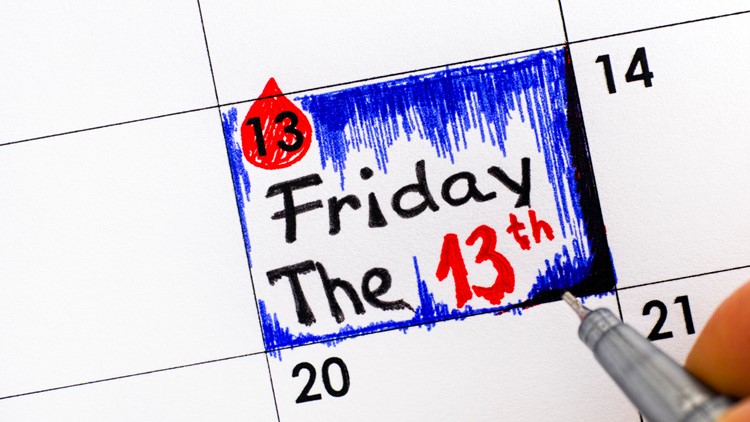 Photo by: Getty Images/iStockphoto
Friday the 13th marked on a calendar.

The history of Friday the 13th

GRAND RAPIDS, Mich. - Friday, Sept. 13 will be the first Friday the 13th in more than a year. The specific date has long been described as an unlucky day with negative superstitions swirling about.

However, why Friday the 13th? Why not some other date -- any other date -- to be called the unluckiest of them all? Well, there are a few reasons, actually.

In many Western cultures, the number 12 is associated with completeness -- 12 months, 12 days on the calendar and 12 zodiac signs are a few examples. According to the History channel, the Code of Hammurabii reportedly omitted the 13th law from its list of legal rules.

According to Biblical tradition, 13 people attended the Last Supper, including Jesus and his 12 apostles. It was also the day before Jesus's crucifixion -- Good Friday -- and History.com says this was the beginning of Christian superstition that having 13 guests at a table is a bad omen.

Friday has also been known to be the day Eve gave Adam the apple from the Tree of Knowledge, and also the day Cain killed his brother, Abel.

'Friday the 13th' by Thomas Lawson

Businessman Thomas William Lawson published "Friday the 13th," a novel about a stockbroker who picks that date to conspire to bring down Wall Street, in 1907. During that same year, a coal and oil schooner commissioned by Lawson and bearing his name was chartered to carry oil from the U.S. East Coast to London.

The ship ran into trouble during the journey and on Friday, Dec. 13, it sank, killing 17 crew members and losing over 2 million gallons of oil, according to Newsweek and Hemmings.

In 1882, a group of people met on Friday, Jan. 13, with the specific goal of confronting fears surrounding the date, the New-York Historical Society reports. The group gathered for a dinner, and to get to their meal, everyone had to walk under a ladder and a banner that read "Morituri te Salutamus," or "Those of us who are about to die salute you."

There were 13 candles lit during the first of 13 courses -- big platters of lobster salad molded into coffin shapes. Jars of salt were spread out around the table, but tossing a pinch of salt over the shoulder was strictly forbidden.

More dinners followed with the same pattern, and after the first annual meeting, the group said that "not a single member is dead, or even had a serious illness." However, this could be where superstition stems from regarding walking under ladders or knocking over a jar of salt.

Many think of the movie "Friday the 13th" when the date approaches, and rightfully so. The movie, made in 1980, introduced the world to Jason, a hockey-mask-wearing killer that was the root for many sequels, comic books and Halloween costumes.

There have also been some major historical events to occur on a Friday the 13th. In September 1940, Germans bombed Buckingham Palace. In October 1972, a plane carrying an Uruguayan rugby team crashed in the Andes Mountains in Chile and killed many of the passengers. Tupac Shakur was killed on on Friday, Sept. 13, 1996, in Las Vegas.

Since 2000, an October blizzard carrying a record 22 inches of snow hit Buffalo, and almost 1 million people lost power for up to a week. And in January 2012, a cruise ship off the Tuscan coast capsized and killed 32 people.

The origins for Friday the 13th might have multiple sources, but there isn't any scientific evidence saying the date is proven to be unlucky. Given it's track record, though, it might be safe to be a little extra cautious come Sept. 13.

Oh, and be prepared -- there will be another Friday the 13th in December.