One year on from his death, John Lewis remembered as hero who 'fought tirelessly for our country's highest ideals'

The Civil Rights icon would have been 81 on Saturday. 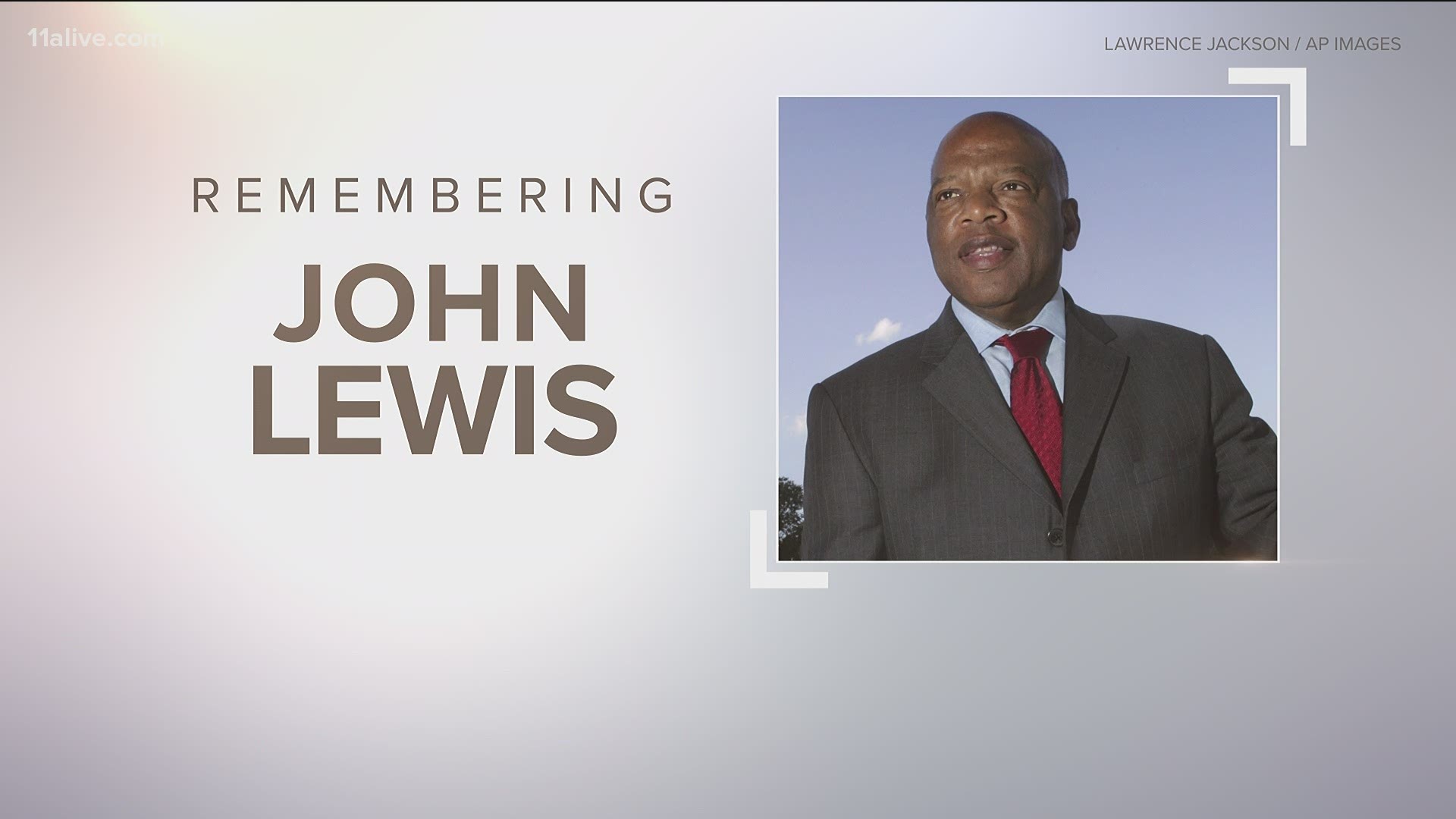 Marking one year since his death, political figures and regular folks alike are remembering John Lewis on Saturday as a hero who "fought tirelessly for our country's highest ideals."

That was how Vice President Kamala Harris put it in a statement, remembering the Atlanta congressman and Civil Rights icon who made it his mission to ensure "the right of every American to make their voice heard at the ballot box."

Sen. Rev. Raphael Warnock, Lewis' pastor at Ebenezer Baptist Church, wrote in a tweet that with the passing of the congressman "we lost a national hero."

"A year ago we lost a national hero, and I lost a friend and parishioner. John Lewis spent his life fighting to ensure our country lived up to its founding creed, and I’m so honored for the opportunity to carry on his legacy," Warnock wrote.

A year ago we lost a national hero, and I lost a friend and parishioner. John Lewis spent his life fighting to ensure our country lived up to its founding creed, and I’m so honored for the opportunity to carry on his legacy. pic.twitter.com/fkM6ACh4Na

In a statement, President Joe Biden recalled speaking with Lewis for the final time.

"He was in those final days as he was throughout his remarkable life – at peace and full of dignity and grace. Instead of answering our concerns for him, he asked us to remain focused on the unfinished work – his life’s work – of healing and uniting this nation," the president said.

Democrats, who have planned tribute vigils around Atlanta and across the rest of the country for Saturday to mark Lewis' passing and push for a new voting rights bill named after him, evoked his signature message of making "good trouble."

Our hero Rep. John Lewis passed away one year ago. We continue his work every day for a democracy that works for all.

Congress must honor his legacy by passing federal legislation to protect our freedom to vote.

Urgent action is required. We can’t let him down. #GoodTrouble pic.twitter.com/nDnyPhUB1x

"John Lewis taught us that when we see something that is not right, not just, not fair, we have to do something. He taught us not to lose hope - that this is the struggle of many lifetimes. He taught us to get in #GoodTrouble. One year already. We miss you," Rep. Val Demings of Florida wrote.

On Saturday, a congressional delegation including Rep. Nikema Williams, who now holds Lewis' seat, will be in San Diego to mark the christening of the USNS John Lewis naval ship.

Nearly one year since the passing of Congressman John Lewis.

Honored to join @SpeakerPelosi and other Congressional Leaders for a first look at the USNS John Lewis before tomorrow’s Christening Ceremony.

Georgia's two U.S. senators, Warnock and Sen. Jon Ossoff, as well as nine of the state's 14 House representatives spoke about Lewis in a tribute video.

God bless the memory of the boy from Troy, John Robert Lewis.

One year ago, Congressman Lewis crossed that final bridge—but his light and legacy as the conscience of Congress will stay shining as bright as ever. pic.twitter.com/7xHWzCGrPb

The City of Atlanta tweeted that a year later, "Atlanta still mourns the loss of one of our most beloved heroes."

"But the legacy of Congressman John Lewis lives on in each of us," the city's official account posted.

One year later, Atlanta still mourns the loss of one of our most beloved heroes, but the legacy of Congressman John Lewis lives on in each of us. pic.twitter.com/ucbdR7QYDY

Highlighting the cause of pushing for the John Lewis Voting Rights Advancement Act, Vice President Harris said in her statement:

I had the privilege of joining Congressman Lewis in Selma, Alabama for what would be his final walk across the Edmund Pettus Bridge, where, 55 years earlier, he and many others were beaten bloody by state troopers as they marched for the right to vote.

Today, the fight is not over. The right to vote remains under attack in states across our nation. And the best way to honor Congressman Lewis's legacy is to carry on the fight - by passing the John Lewis Voting Rights Advancement Act as well as the For the People Act, and by helping eligible voters no matter where they live get registered and vote, and have their vote counted.

As the Congressman knew well, our democracy is stronger when everyone participates - and it is weaker when people are left out.

President Biden made a similar call in his statement.

Over the past six months in office, we find ourselves often reflecting on that last conversation. For all the historic progress we have made as a nation to beat this pandemic and repair and rebuild the economy, we know there is more work to do to deliver the promise of America to all Americans. That means ensuring equity remains at the heart of our vaccine effort and that health care is a right not a privilege. It means building an economy that respects the dignity of working people with good jobs and good wages. It means ensuring equal justice under law is real in practice and not just a promise etched in stone.

Perhaps most of all, it means continuing the cause that John was willing to give his life for: protecting the sacred right to vote. Not since the Civil Rights Movement of the 1950s and 1960s have we seen such unrelenting attacks on voting rights and the integrity of our elections – from the Big Lie to the insurrection on January 6th to the new waves of voter suppression and a new front of election subversion.

John once said, “Freedom is not a state; it is an act.” On this day of remembrance, let us continue to act.

I again call on Congress to pass the For the People Act and the John Lewis Voting Rights Advancement Act so I can sign them into law. And as a nation, let us act and forge a coalition of Americans of every background and political party — advocates, students, faith leaders, labor leaders, business executives — and raise the urgency of this moment.

For We the People, for our democracy, for America itself – we must act.

With John’s spirit guiding us, we must be unafraid and never, ever give up.