Sue Meinderstsma, a Kent County Road Commission worker, was mowing the lawn in the median on Broadmoor Avenue, when a car veered off the road and struck her. 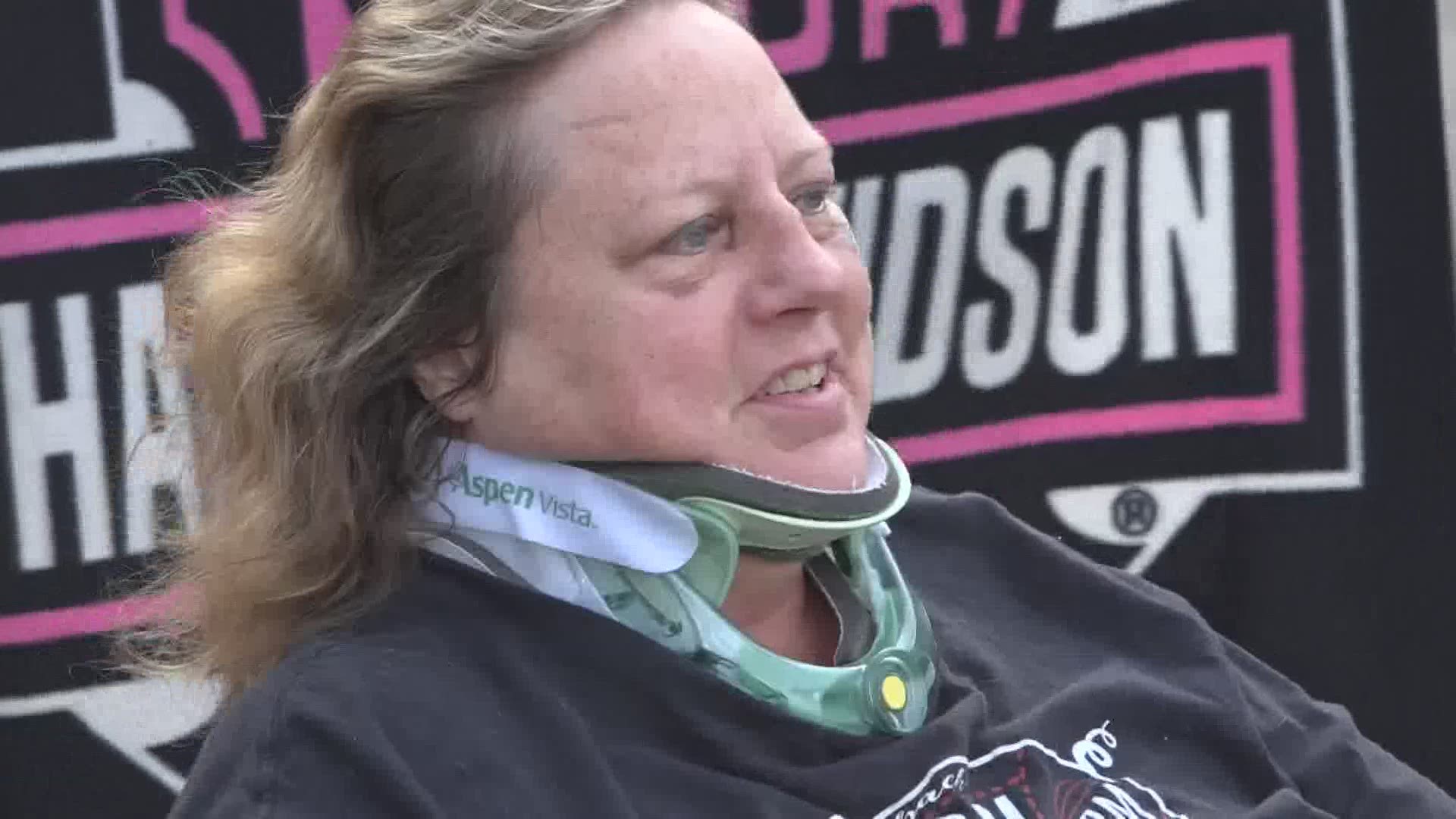 GRAND RAPIDS, Mich. — On Sept. 17, Kent County Road Commission worker Sue Meindertsma was mowing the lawn in the median on Broadmoor Avenue, south of M-6. That's when a vehicle veered off the road, and struck her and her tractor.

"I don't know how many times I was pitched on and off that thing," said Meindertsma, "It ripped the seat off it, did some pretty significant damage."

Meindertsma has been recovering at Mary Free Bed Rehabilitation Hospital since the accident, and has a long road ahead of her. She has a broken neck, two broken legs and is in a wheelchair.

"You wake up after something like that and hear the injuries," said Meindertsma. "You’re pretty thankful to be alive."

While she doesn't know exactly what caused the vehicle to hit her, Meindertsma hopes her accident and story can serve as a reminder for drivers to slow down and not drive distracted.

Credit: Kent County Road Commission
Sue on a lawn mower like the one she was riding when she was hit.

She said she has had many close calls in her career and has had many friends and co-workers involved in accidents. One was even killed.

"Your heart sinks immediately," said Jerry Bryne, the Director of Operations at the Road Commission. "Because you worry if they were just struck, if they were killed, if they were injured. As you head to the scene, a million things run through your mind."

Bryne said the past ten days "have just been horrific." In that time, there have been four accidents involving road workers. Two were seriously injured, including Meindertsma, two were killed.

"Traffic is going by them at 45 mph, if they’re abiding by the posted speed limit, to 60-70 mph," said Byrne. "Imagine your chair you work in, someone buzzing by you at 70 mph every day. It’s a very scary situation for the workers."

Byrne said while traffic volume has been down this year, about 20 percent according to MDOT, road worker accidents have actually increased. He said that's due to people driving faster because there is less traffic congestion.

"People need to be aware and drive with 100 percent of faculties," said Byrne. "That’s not talking on the phone, eating or doing your hair. It’s paying attention to your driving."

Credit: 13 OYS
Sue waves as her friends drive by on their motorcycles.

Saturday, friends of Meindertsma arranged a special treat for her. She is part of a motorcycle club, who does an annual "Barn to Barn” ride to raise money for charities. This year, they made a special detour to drive past Mary Free Bed.

Around 45 bikes, and even more vehicles, honked and raised signs of encouragement as Meindertsma waved from the entrance.

"It was emotional for her, it was emotional for us," said Mike DeVos, a friend who organized the ride. "When we realized we were coming down to see her, we though what a great opportunity to bring awareness for those road commission workers and how they’re put in danger."

Meindertsma is facing the possibility of more surgeries, and has at least 12 weeks recovery for one of her legs. She also owns a catering company, Miss Piggies BBQ, and said it could be a year until she is able to get business up and running again due to her injuries.

"Thank you for coming out and making my day," said Meindertsma with tears. "Treasure your family, because you never know. I do. I love every one of you guys." 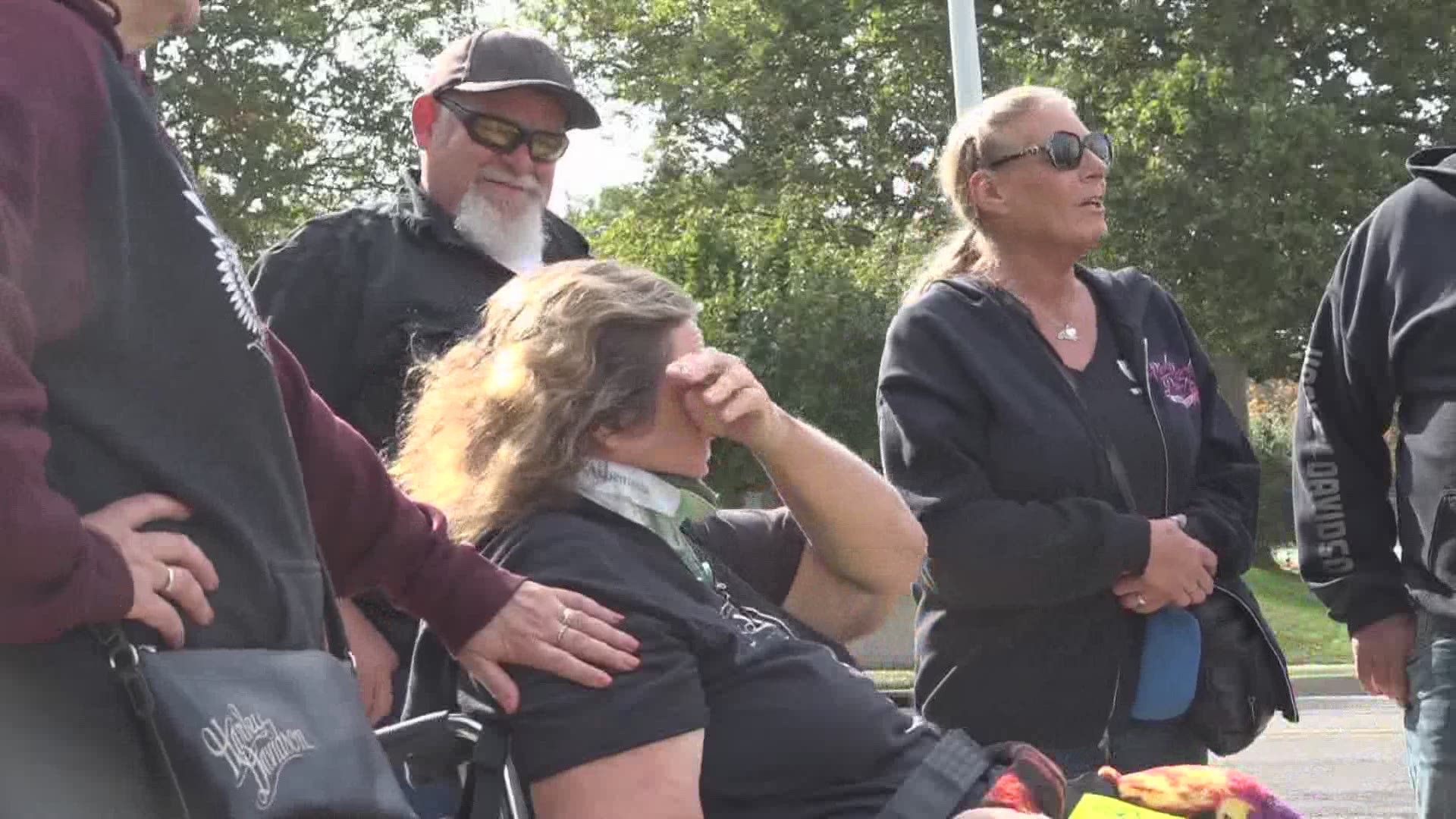