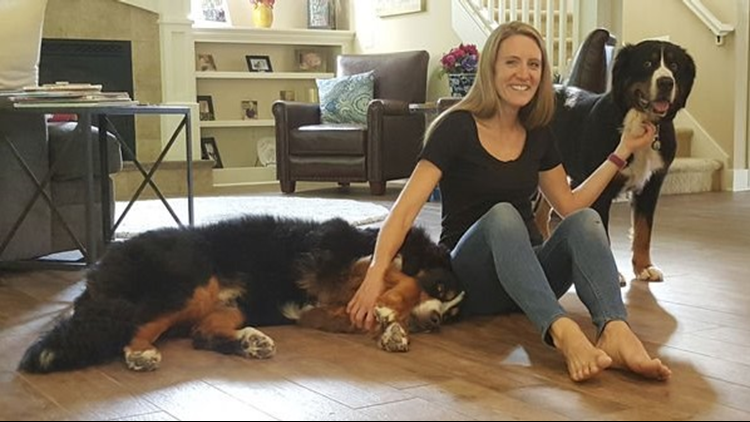 Photo by: Becky Vargo/Grand Haven Tribune
Kim Goldman with her nearly 8-year-old rescue dog Millie. Their family dog Monte, 7, lies at her side.

GRAND HAVEN TWP. (Grand Haven Tribune) — Kim and Ryan Goldman were not looking for another pet after the unexpected death of Bear, their 10-year-old Bernese mountain dog, in July.

But when Kim saw 71/2-year-old Millie on the Facebook page of a rescue organization, she knew that was the dog they needed to fill the hole in their hearts and to lift up their other Bernese, Monte, who was saddened after the loss of Bear.

The Grand Haven Township residents, knowing that the lifespan of a Bernese mountain dog is normally in the range of 6-8 years, realized that there might not be a lot of people out there who wanted a dog as old as Millie.

So Kim researched what she needed to do on the Bernese Auction Rescue Coalition (BARC) website, submitted her application and waited.

RELATED: Watch the heartwarming moment this homeless man is reunited with his dog

“I got a call within hours of submitting the application,” she said. This resulted in a long phone call with the foster family and a decision to move forward with Kim’s references.

The next day, Kim and her mother, Michael Wheeler, were making arrangements to fly out to New Hampshire to bring Millie home.

BARC is a nonprofit corporation dedicated to rescuing and rehabilitating Bernese mountain dogs from dog brokers, dog auctions, puppy mills and any other dangerous, exploitative or abusive situation. The coalition places these dogs in loving homes as spayed or neutered companions.

Millie was rescued by BARC after a puppy mill breeder dropped her off with animal control, which then took her to an animal shelter, Wheeler said.

“She has such compassion for these dogs that have just been set aside,” Wheeler said of her daughter. “I swear she was a ‘Berner’ in another life.”

Kim said that it was likely that Millie was tied up in a barn or kept in a crate her entire life, while having litter after litter of puppies. The breeder then discards the dog when they can no longer breed.

BARC includes some background information on the dogs that they rescue, including what types of homes would be best suited for them. Most of the dogs are not socialized and need time to get used to their new owners.

Kim said that the organization does a thorough check on people before the dogs are allowed to go to new “forever” homes from their foster homes.

“We needed a fence. We needed a dog that wasn’t too rambunctious but could still show Millie how to be a dog,” she said.

At 7 years old, Monte fit that bill. And the Goldmans had recently fenced in their backyard.

Once approved, Kim said everything happened so fast. She and Wheeler flew to Manchester, New Hampshire, last weekend with a kennel large enough for the 90-pound dog. They rented a large SUV, drove to New Market to get Millie and then started the long drive home.

“She would not get out of the car to go to the bathroom. She just held it,” Kim said.

“There was too much noise from all the other cars and trucks around,” Wheeler added, but the dog finally did urinate when they stopped for the night.

Once they got back home on Monday, Millie was happy to go out into the Goldman’s large backyard.

Kim said it would take some time for the dog to adjust. The dog seems to like Kim’s daughter, Madison, the best. Millie will also nose Monte and is starting to come to Kim.

“The foster family said it took about a week in their house for her to show affection,” Kim said. She noted that Monte was already starting to perk up with another dog in the house.

Kim loves the Bernese mountain dogs and the idea of rescuing them, although Monte and Bear were purchased as puppies from a trustworthy breeder, she said.

“Hopefully, we’ll give her the best life we can whether she lives three months or three years,” Kim said.

RELATED: 13 ON YOUR SIDE says goodbye to Rae