"He had something in his mouth, we weren't sure what it was. It cut in his lips, then all the way around to the back of his neck." 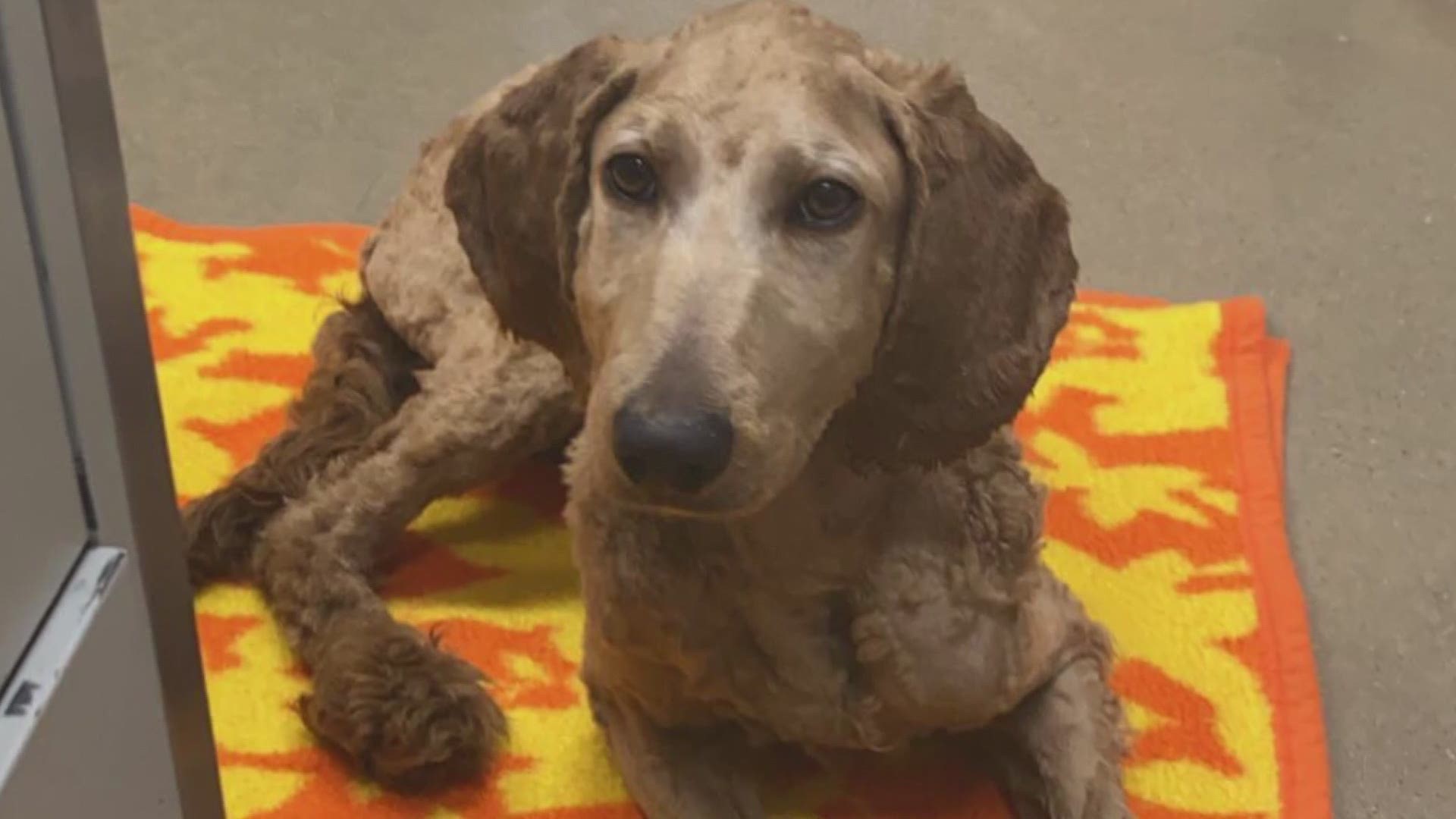 FREMONT, Mich. — Hank the labradoodle was picked up from a breeder with his siblings in Fremont, and brought to Michigan Doodle Rescue Connect earlier this year.

Right away, the founder of the rescue, who calls herself Nana Doodle, noticed something wrong with the puppy.

"We quickly noticed that Hank had a leather strap through his mouth," said Doodle.

The strap was some type of leather collar, that had lodged itself into Hank's mouth. The strap had been there for some time, as his skin had grown around it and it became infected. Doodle said it was like a horse bridle, and dug into the crease of his cheek about an inch-and-a-half deep, and went around both sides of his mouth.

"My knees buckled," said Doodle. "You could see it in his eyes. You could see his heart and his soul. And here we have a beautiful dog that was trusting us, allowing us not trying to get away from us. I think he really knew we were there to help him."

Credit: Nana Doodle
After the leather strap was removed from Hank's mouth, he was left with scars and dental problems.

David Samuel Yoder of Fremont was charged with abandoning/cruelty to one animal. The charge is a misdemeanor, punishable by up to 93 days in jail or $1,000 fine. Yoder faces arraignment later this month.

Newyago County Prosecutor, Ellsworth Stay, said Yoder is accused of neglect, torture or pain for the acts that occurred around March 7.

Doodle said she wishes there were stricter laws placed on breeders, so something like this can't happen again. She hopes Hank's story sparks a change.

"One of the most important things, I think, is to create awareness that this is really happening," said Doodle, "We need to contact our legislators, our state officials, and communicate with them that we're not going to be silent. We are going to speak up for the animals."

Hank spent a week at the Surrey Veterinary Clinic in Clare. He slowly recovered, but he still has scars, his gum line never healed correctly, his hair doesn't grow right on his neck, and he has dental problems. He will need help with that the rest of his life.

When Doodle picked up Hank from his stay at the hospital, she had a feeling something was wrong. She realized the new owner for Hank was still inside. He was adopted by Alex Govitz, the surgical assistant who helped with Hank's recovery.

Credit: Alex Govitz
Hank and Alex bonded while at the hospital.

"I immediately turned around, and I know that she was having a moment behind the building and she saw me pull up," said Doodle, choking up at the memory. "And I said, 'Are you really serious? Do you really, really want to adopt Hank?' And she said, 'Yes.' And I handed her the leash. And I said, 'Here's your dog.'"

Govitz said Hank was a little apprehensive at first, especially getting along with her other dogs. However, now, he's a really happy, loving dog. She even said his scars make him "look like he's always smiling."

"Just to see them thrive, to come from such a bad situation or from being hurt in such a bad way," said Govitz, "And to see him grow the way that he has, it's just been amazing."

She bonded with Hank right away in the hospital, having to carry him inside and out to use the bathroom. With his injuries, he couldn't wear a collar and leash well.

"Every time I'd go back there, he'd cry for me," said Govitz, "We would go outside, and he would just stay around me."

The animal hospital even covered the tab for Hank's expensive treatment.

Govitz said she is glad to see the breeder face consequences for hurting Hank. However, that feeling is bittersweet.

"It's really painful to think about," said Govitz, "And I know that he's not the only one that it happens to, which is really sad that you can take such a vulnerable being and treat them in a way that is so inhumane."