Factory-level officials from the United Auto Workers union voted to recommend the agreement to members at a daylong meeting in Detroit Thursday. 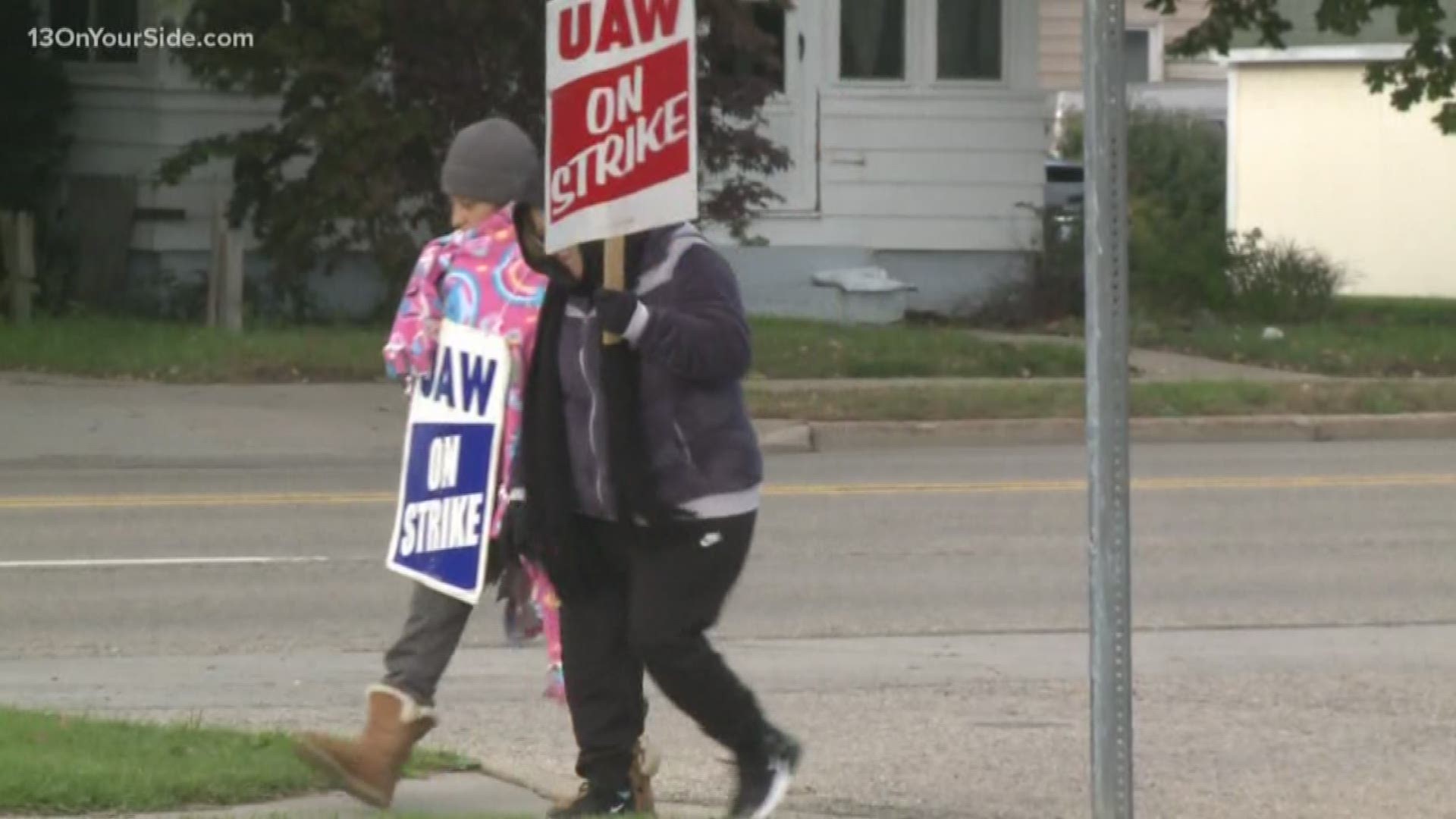 DETROIT — Striking General Motors workers will stay on the picket lines for several more days until they vote on a tentative four-year contract agreement with the company.

Factory-level officials from the United Auto Workers union voted to recommend the agreement to members at a daylong meeting in Detroit Thursday. But they also voted not to return to factories unless members approve the deal.

About 49,000 workers have been on strike for more than a month, paralyzing GM's U.S. factories and costing the company an estimated $2 billion.

On Wednesday, the company and the UAW reached a deal that would give workers a mix of pay raises, lump sum payments and an $11,000 signing bonus. In return, the contract allows GM to proceed with factory closures in Lordstown, Ohio; Warren, Michigan; and near Baltimore.

Details were posted Thursday on the United Auto Workers website as factory level union officials met to decide if they'll approve the deal. Workers went on strike Sept. 16, crippling the company's U.S. production and costing it an estimated $2 billion.

The Detroit Hamtramck plant, which GM wanted to close, will stay open and a new electric pickup truck will be built there. Meanwhile, the Lordstown area will get a new battery factory that is expected to employ 1,000 workers. In addition, a company called Lordstown Motors could also set up a factory that would initially employ 400 workers. But neither of those would come close to the shuttered Lordstown assembly plant, which two years ago employed 4,500 people making the Chevrolet Cruze compact car.

The deal shortens the eight years it takes for new hires to reach full wages and gives temporary workers a full-time job after three years of continuous work. Workers hired after 2007 who are paid a lower wage rate will hit the top wage of $32.32 per hour in four years or less. The deal also provides a $60,000 early retirement incentive for up to 2,000 eligible workers.

The tentative agreement between GM and the UAW now will be used as a template for talks with GM's crosstown rivals, Ford and Fiat Chrysler. Normally the major provisions carry over to the other two companies and cover about 140,000 auto workers nationwide. It wasn't clear which company the union would bargain with next, or whether there would be another strike.

The strike at GM immediately brought the company's U.S. factories to a halt, and within a week, started to hamper production in Mexico and Canada. Analysts at KeyBanc investment services estimated the stoppage cut GM vehicle production by 250,000 to 300,000 vehicles. That's too much for the company to make up with overtime or increased assembly line speeds.

GM and the union have been negotiating at a time of troubling uncertainty for the U.S. auto industry. Driven up by the longest economic expansion in American history, auto sales appear to have peaked and are now heading in the other direction. GM and other carmakers are also struggling to make the transition to electric and autonomous vehicles.

Meanwhile, President Donald Trump's trade war with China and his tariffs on imported steel and aluminum have raised costs for auto companies. A revamped North American free trade deal is stalled in Congress, raising doubts about the future of America's trade in autos and auto parts with Canada and Mexico, which last year came to $257 billion.

Amid that uncertainty, GM workers wanted to lock in as much as they can before things get ugly. They argue that they had given up pay raises and made other concessions to keep GM afloat during its 2009 trip through bankruptcy protection. Now that GM has been nursed back to health — earning $2.42 billion in its latest quarter — they wanted a bigger share.

The union's bargainers have voted to recommend the deal to the UAW International Executive Board, which will vote on the agreement. Union leaders from factories nationwide will travel to Detroit for a vote on Thursday.

The earliest workers could return would be after that.

More UAW-GM strike stories on 13 ON YOUR SIDE: