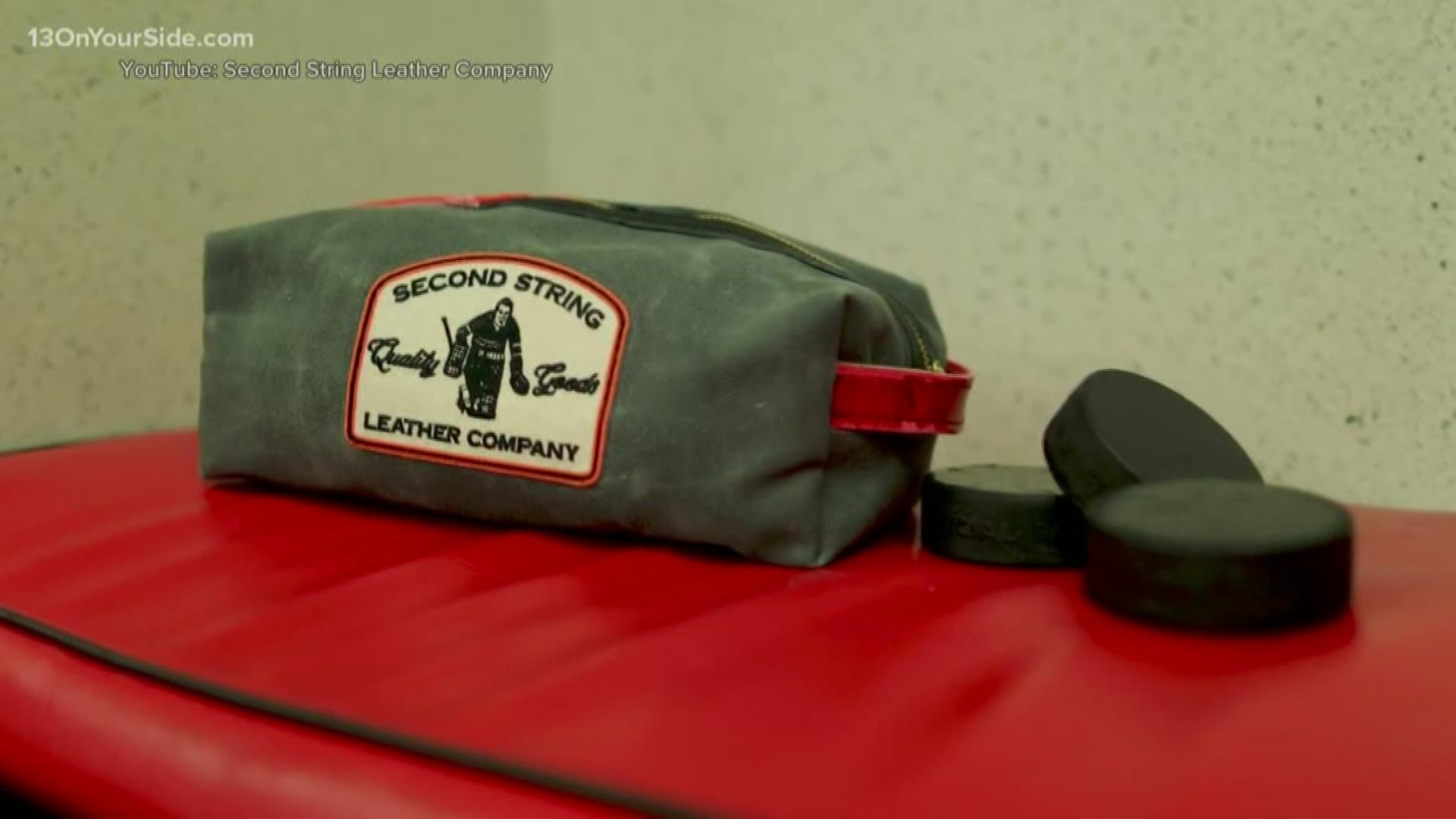 (GRBJ) - Enamored with the nostalgia of old goalie equipment, a pair of local hockey buffs have created a business that keeps the scent of leather close at hand.

Zac Smith and Joe Messina launched Grand Rapids-based Second String Leather Company in May after the pair — who have known each other over a decade through the game of hockey — had the idea to collect and upcycle vintage full-grain, oil-tanned leather goalie gear into new products that fellow hockey fans could enjoy.

Their first line of products launched May 29 at secondstringleather.com and sold out within two weeks. They took the summer to build up stock and launched a second line Aug. 24.

Each piece is one-of-a-kind, made from acquired or donated goalie leg pads, blockers, gloves and more that formerly belonged to high school, college or professional hockey players.

Items made from goalie gear currently in the Second String Leather store include wallets, keychains, watch bands and bathroom bags.

The shop also offers other branded leather items including coasters, pillows, patches, bags, totes and apparel that are not all made from hockey equipment but are similar in aesthetic and branded with the company’s logo.

Smith and Messina met in 2007 at Walker Ice Arena when Smith was a varsity goalie for the Kenowa Hills High School hockey team and Messina was a goalie coach for the company at which he is now vice president, South Lyon-based Bandits Goalie School.

Messina approached Smith and tried to persuade him to attend the goalie school and buy a new helmet from his business, Masked Marvel Goalie Helmets.

“He always pushed me off, but from there, we kept in touch in the hockey world, and he actually ended up going to Davenport University a handful of years ago, where I’m the goalie coach,” Messina said.

Smith played Division II hockey at Davenport while helping Messina run weekend goalie clinics on the side. He withdrew from the team after about a year to raise a family but continues to work as a goalie coach with Bandits.

The pair germinated the seed of a business idea in 2017.

“We actually saw something on Instagram (about a similar business),” Smith said. “We were like, ‘Oh man, that’s cool.’ And then we got thinking, ‘Why don’t we do this with goalie pads? The goalie community is huge, and it would be something crazy unique that nobody has ever done.’ We kicked it around for probably about a year, year and a half.”

It took a while to brainstorm a business name and logo, working virtually with a designer from Boston, and the duo initially struggled with developing a vision for the products.

At first, they worked with a part-time leatherworker, but the demands of his family and full-time teaching job did not allow him to produce goods quickly enough, so he referred Messina and Smith to Jacob Vroon, whom he knew from the local leather-working community.

Vroon is owner of a small-batch leather production shop, Harbinger Leather Design. He produces goods under the Harbinger brand as well as for private labels. The shop runs out of a space in the back of Gemini Handmade, the store he and his wife, Elyse Welcher, co-own at 963 Cherry St. SE in Grand Rapids’ East Hills neighborhood.

“We went there on a Sunday morning and (four) months later, we launched our first collection,” Messina said.

“We looked around, but to find someone in our backyard that’s in Grand Rapids … to drive 10 minutes to your shop to meet with your leather craftsman is a pretty special feeling. … We’ve been really fortunate to find him.

“The biggest piece for us was finding someone who had the right vision of how we wanted to lay out certain things. We don’t even need to tell him anymore. He just knows. He’s like, ‘I got it.’”

Smith said his love for hockey is largely about the gear. Although Vroon doesn’t have a history with the sport, his “artistic mind” knows good leather when he sees it, Messina said.

“He is drawn to the leather. When we brought (the equipment in), his jaw dropped to the floor,” Messina said. “I don’t think he’s a hockey person by any means, so for him to see leather from the ’60s and ’70s and these goalie pads — he didn’t know what to say.”

The first collection that rolled out in May was sourced from vintage equipment that tended to be mostly plain brown or yellow and black.

The new line that just launched includes a Pro Spec Series called Demko after National Hockey League player Thatcher Demko, who is a goaltender for the Vancouver Canucks.

The wallets in the series have a patriotic theme, as they are made from the early 2000s gear Demko wore as a player for the Utica Comets in the American Hockey League.

Smith and Messina are keeping their stick on the ice.

They intend to keep their day jobs — Messina as the owner of three businesses and VP of another, and Smith as a used car salesman and goalie coach. But they also are expanding Second String Leather, building an office, warehouse and fulfillment “barn” at Messina’s home property in the Grandville/Walker area.

In September, they intend to launch a custom component to Second String Leather, in which people can donate their goalie pads or family heirloom equipment to be converted into made-to-order products.

“We’ve actually been approached by multiple professionals about getting their pads done and giving them to their friends and family and everybody who’s helped them along the way,” Smith said.

Messina added the business gets these requests because there’s no other outfit in the hockey world right now doing what Second String Leather does.

Along with the custom arm, they also are building out a women’s line of products, including totes and accessories.

All of the business Second String Leather has generated so far has been during hockey’s offseason.

To get its name out there even more, Second String Leather has a gig on tap selling products at a kiosk during the Grand Rapids Griffins’ home opener Oct. 11 against the Milwaukee Admirals. Messina said he expects it will be a sellout event in the nearly 11,000-seat Van Andel Arena.

Not long after, they will have a booth at an upcoming hockey expo in Minneapolis that Messina said usually has about 100,000 attendees.

“It’s another whole level of getting our pieces in front of more people,” he said.

“Every day, we have more followers — Facebook now has 700, Instagram has over 3,000, and every day, it keeps spreading.

“We’re very passionate about the game of hockey, and to do this and sell it to someone to put a smile on their face is priceless.”

This story originally appeared in the Grand Rapids Business Journal. To find a similar content, pick up a copy or find more on their website. 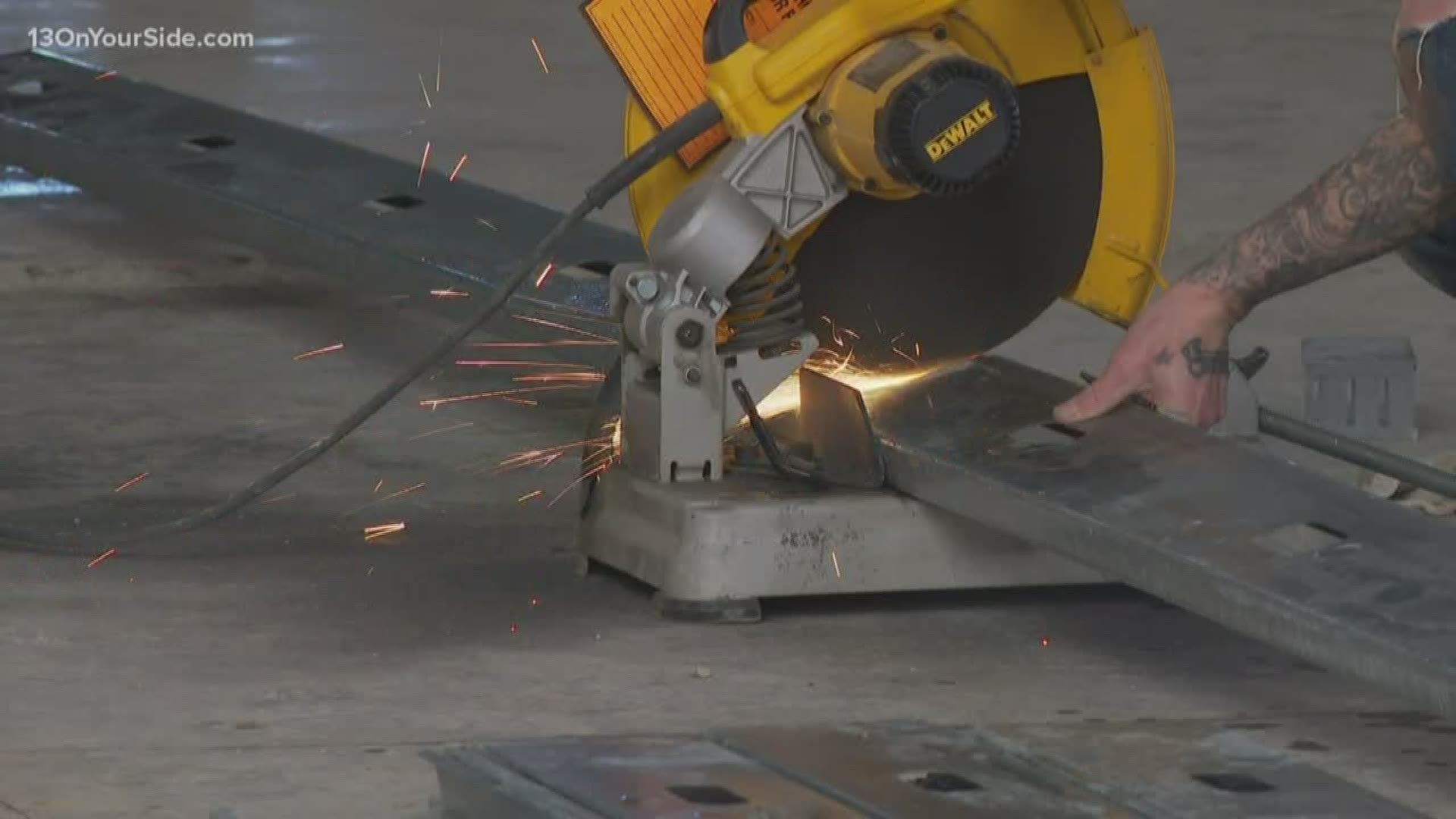