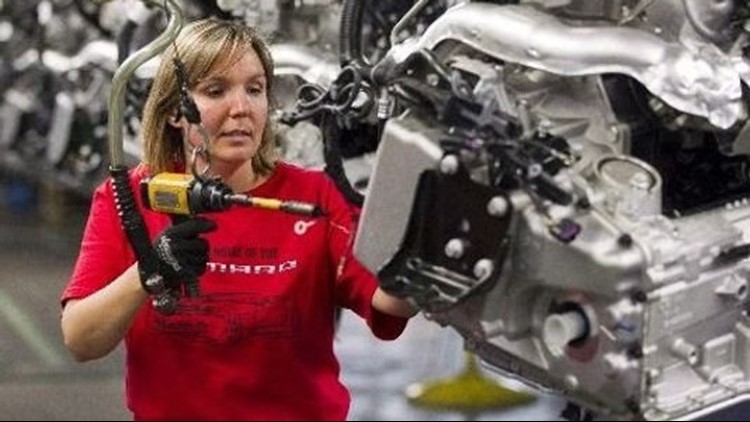 Why these 4 GM plants should be worried about closure risk

Two assembly plants in Michigan, one in Kentucky and one in Kansas are operating far below their production capacity.

Industry experts and some in the UAW warn that the factories need more vehicles to build or they could face a similar fate as the three assembly plants GM has said it will idle next year: Detroit-Hamtramck, Lordstown in Ohio and Oshawa in Ontario, plus two U.S. transmission plants.

"If you’re below 80-percent capacity, you’re not making any money operating that plant, so that’s not a long-term sustainable position," said Kristin Dziczek, director of the industry, labor and economics group at Ann Arbor's Center for Automotive Research.

And, it is "extremely" unrealistic, said Dziczek, that Tesla CEO Elon Musk can save the plants despite his saying over the weekend that he would be open to buying some GM plants. Tesla has struggled to reach production goals at its sole plant in Fremont, California, a former GM facility that also was the site of a GM-Toyota joint venture.

The U.S. market is not growing and consumers prefer SUVs and pickups to sedans, putting factories that build cars at risk of losing products to build.

The GM plants operating at low capacity are the Lansing Grand River Assembly in Lansing; the Lake Orion Assembly, north of Detroit; the Bowling Green Kentucky Assembly Plant and the Fairfax Assembly in Kansas City, Kansas, based on data from LMC Automotive.

While observers said that more closing announcements seem unlikely before UAW contract talks next summer, the low utilization at these factories is likely to be a topic.

For its part, GM said it continuously looks at its operations for ways to improve efficiency and capacity utilization.

"We believe the recent actions move us in the right direction, and we will continue to monitor the market/consumer trends and adjust accordingly," said Kimberly Carpenter, GM spokeswoman. She declined to discuss any of GM's future vehicles or where they might be built.

The UAW has said GM's cost-cutting move will be challenged and it is looking ahead at all options available "through legal, contractual and bargaining means," said Brian Rothenberg, UAW spokesman.

Lansing Grand River, which has about 2,000 employees, is operating at 33-percent capacity, LMC's data show. It presently builds the Chevrolet Camaro muscle car, the Cadillac ATS and CTS sedans. Production of the two Cadillac cars will stop this winter and GM plans to replace them with yet-to-be-identified new products.

In June, GM said it would invest $175 million at the Lansing Grand River facility over the next three years. The new vehicles to be built there are expected to debut sometime before 2021.

But last year GM laid off about 500 workers from the plant, cutting the third shift because of slow sales of the Camaro, CTS and ATS, reports said. It is presently running two shifts, but will move to one shift in January, LMC analysts say.

The plant is fitted to build electric vehicles, which requires different safety and assembly processes versus those to build gasoline vehicles, said Jeff Schuster, market forecaster and president of LMC Automotive in Troy.

"If it was substantially different it might be reason to keep that plant going, especially as electrification continues," Schuster said. But he added, "Something has to go in there to support it because it's a fairly large facility."

Bowling Green Kentucky Assembly Plant, with 870 employees, is running at 27 percent of its capacity with one production shift, according to LMC data. It builds the various incarnations of the Chevrolet Corvette as well as the engines for Corvette.

Because it is a specialty plant that GM retooled about a year ago, it's at less risk of being closed than some of the others, said Schuster.

"If they were to potentially look at Cadillac getting a premium sports car, that's a possibility for Bowling Green," said Schuster. "But that's still low sales volume, so it won't improve it substantially from a utilization standpoint."

Fairfax Assembly, where the Chevrolet Malibu sedan is assembled, is at 48-percent utilization. There, 2,200 employees work on two shifts, LMC data show.

"I'd put that on the watch list," said Schuster.

GM reported its Malibu sales in the third quarter were down 45.8 percent from the year-ago period.

"I don't see announcements on these plants closing ahead of the UAW talks, but these become discussion items in the talks," said Schuster.

Indeed. A person familiar with UAW strategy who asked to not be identified because he is not authorized to speak for the union, said it's possible that GM could "unallocate" product, thus shuttering a plant, anytime a vehicle that a plant builds isn't selling well.

In fact, the UAW's Rothenberg said the union has long been concerned about investment in U.S. plants not allowing flexibility to add vehicles "and the continuous movement of product by GM such as the Envision in China and product announcements in Mexico."

But another concern is the potential for the underutilized plants to be used "as a pawn in a chess game to keep jobs."

"They can use one against the other. They've done it in the past," the union insider said.

The UAW's current contract expires at midnight Sept. 13, 2019. The union has more than $760 million in its strike fund, and UAW officials say they will use it if necessary, but prefer to see it as an incentive for Detroit carmakers to negotiate fairly.

GM's Carpenter said the company and the UAW will talk about "numerous topics that affect our employees and our business during 2019 negotiations. As always, our intent is to work with the UAW constructively to address our business challenges in a way that keeps the company competitive in these changing market conditions."

The low operating levels along with decreased sales of the vehicles built at the four plants match the levels of the three GM car plants designated to shutter next year. Detroit-Hamtramck was running at 37-percent capacity, Lordstown at 30 percent and Oshawa 33 percent, according to LMC's data.

"It certainly puts up a pretty substantial red flag," said Schuster. "You can't continue to run at that level."

But for those at Lordstown and Detroit-Hamtramck, news of GM's plans to shutter the plants was shocking. GM builds the Chevrolet Cruze compact car in Lordstown.

A Lordstown employee told the Free Press that GM took the plant to one shift in July citing slowing Cruze sales. At that time, skilled trades and production employees with certain seniority were offered the chance at a Special Attrition Program to mitigate the impact to workers who might get laid off, this worker said. GM confirmed that it offered such a program when it removed the second shift.

"But it was represented as though they hoped that sales would increase and they would restart second shift," this worker, who asked for anonymity out of fear of job loss, wrote in an email. "Many people here decided to wait it out because (GM) gave no indication that a closing or unallocating was possible."

Detroit-Hamtramck was closed for the Thanksgiving holiday when GM announced the news it would be closed next year. Many of its 1,500 workers found out their jobs were in danger via the media or social media.

More: GM workers say they had 'no warning' of closure

Musk to the rescue?

Short of new product, tech billionaire and Tesla CEO Elon Musk is sizing up GM's soon-to-be-idled plants: Lordstown, Oshawa and Detroit-Hamtramck. He told CBS's "60 Minutes" that it's "possible that (Tesla) would be open" to taking over automakers' old plants, including factories GM recently has slated for closure.

Economist Jon Gabrielsen, who advises automakers and suppliers in North America, questioned whether Musk could afford to buy GM plants "and whether he would want UAW labor costs."

The UAW is trying to represent workers at Tesla's Fremont factory, which Musk is fighting. In May, Reuters reported, the UAW filed a complaint with the National Labor Relations Board accusing Musk of illegally threatening to take away benefits from workers who joined the union.

Schuster said Musk's comments about buying a GM plant is consistent with his tendency to want to "jump in and attempt to solve problems."

"If GM would be willing to sell them and Tesla had funding, I could see the possibility of one of the plants, but don’t think he could absorb all of them," said Schuster.

That's because even if they were sold at a bargain price, Schuster said, they would require expensive investment to convert them to Tesla products.

"The notion of Tesla buying up all the plants is not very realistic," Schuster said. "That is biting off quite a bit more than he needs now, given the desire and plan to build a plant in Shanghai."