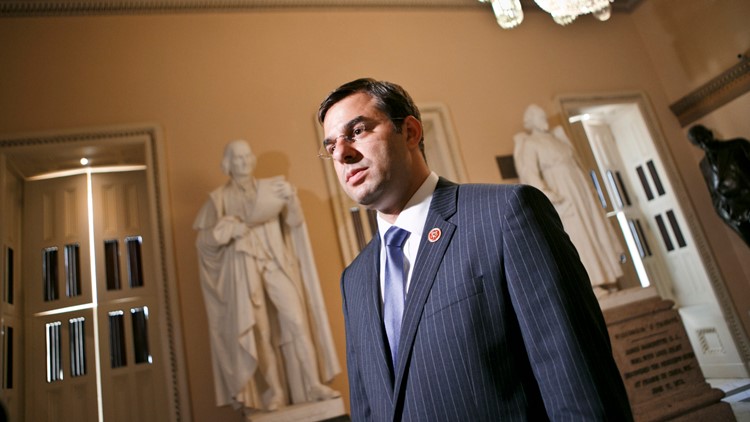 Photo by: AP
File - Rep. Justin Amash, R-Mich., comments about the vote on the defense spending bill and his failed amendment that would have cut funding to the National Security Agency's program that collects the phone records of U.S. citizens and residents, at the Capitol, Wednesday, July 24, 2013. (AP Photo/J. Scott Applewhite)

Barr was the first gatekeeper of the Mueller report, a 448-page explanation of special counsel Robert Mueller's findings after investigating President Trump's 2016 campaign and its possible connections to Russia.

The attorney general, who was appointed by the president in February, read the report and gave a four-page summary to Congress on April 4. The summary was the focus of criticism, with House Democrats questioning if it presented filtered version of the report.

The Republican representative said the letter "selectively quotes and summarizes points in Mueller's report in misleading ways." He comes back to a main point of contention in the report, in which Mueller said he decided not to offer an official opinion whether Trump broke the law because there is a Department of Justice opinion that indicting a sitting president is unconstitutional.

The report said Trump did not engage in collusion with Russia, but it reached no conclusion whether Trump obstructed justice.

Amash calls out Barr, saying his summary did not mention those issues when explaining Mueller's choice not to make a decision to prosecute. "He instead selectively quotes Mueller in a way that makes it sound—falsely—as if Mueller’s decision stemmed from legal/factual issues specific to Trump’s actions," the tweet read.

Amash continues to explain his reasoning why he believes because of Barr's letter, "the public and Congress were misled."

RELATED: All by himself: Amash alone among GOP on impeachment

After Barr's letter was released, Congressional Democrats and Mueller himself urged for the full report to be published. On April 18, a redacted version of the 448-page report was given to Congress.

"In the interim, Barr testified before a House committee and was misleading about his knowledge of Mueller’s concerns," Amash said. "Barr was asked about reports 'that members of [Mueller’s] team are frustrated…with the limited information included in your March 24th [sic] letter, that it does not adequately or accurately necessarily portray the report’s findings. Do you know what they’re referencing with that?'”

"Barr absurdly replied: 'No, I don’t…I suspect that they probably wanted more put out.' Yet Mueller had directly raised those concerns to Barr, and Barr says he 'suspect[s]' they 'probably' wanted more materials put out, as if Mueller hadn’t directly told him that," the congressman's tweets read.

"In truth, Mueller’s report describes concerning contacts between members of Trump’s campaign and people in or connected to the Russian government," Amash said.

It's been just over a week since Amash ruffled feathers after a 13-tweet thread said Trump engaged in "impeachable conduct." The congressman said it took him time to read the entire Mueller report, but he is now coming forward with his conclusions.

The Mueller report has been in the works for much of Trump's presidency. And since its release in April, questions still remain about what action, if any, will be taken as a result of the Russia probe.

In his latest 25-tweet thread, Amash concludes that Barr "successfully used his position to sell the president’s false narrative to the American people. This will continue if those who have read the report do not start pushing back on his misrepresentations and share the truth."

Amash has received some blow back for his opinions, with two Republicans announcing their primary campaigns against him and the DeVos family announcing they will not be donating to his re-election campaign. The president also called him a "loser."

Amash represents the 3rd district, which covers Grand Rapids and a large chunk of West Michigan. As a Congressman during Trump's presidency Amash has made headlines for bucking party trends and sticking to his libertarian principles.

Tuesday's town hall will take place at the Grand Rapids Christian High School in the DeVos Center for Arts and Worship from 5:30-6:30 p.m.