The first two versions of 'Big Gretch' beer sold out in minutes. The same expectation exists for the third version, which goes on sale this week.

MUSKEGON, Mich. — A little more than two months after the second version of "Big Gretch" beer sold out within minutes, Muskegon's Rake Beer Project is set to release its third and final installment of the popular brew, which features a new look and a new taste.

"We knew when we released the second version that there was going to be a third one," said Josh Rake, owner of Rake Beer Project, which is in downtown Muskegon. "We wanted Big Gretch to be a trilogy."

The second version was called "Big Gretch - The Return." It was made available for online preorder in early December of last year. 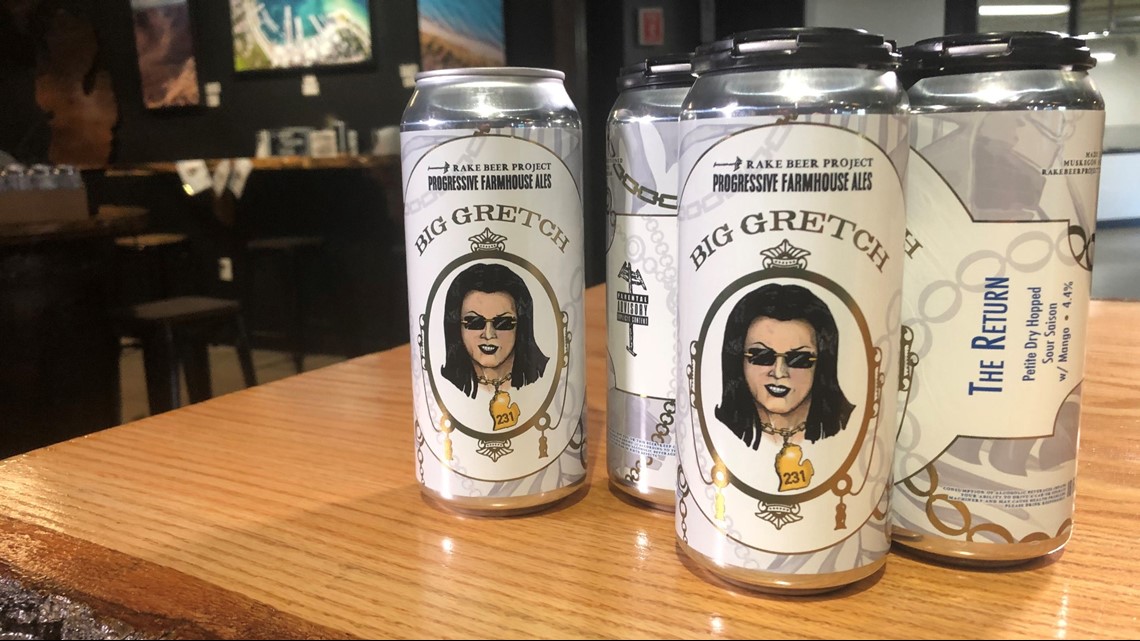 The entire batch sold out in less than ten minutes.

Rake says they doubled the amount for this third and final installment so that anybody who wants some can hopefully get it.

"Our last run only had 60 cases, so this run will have 120 cases available," Rake said. "We started brewing and conditioning this version two months ago, so it's ready to go."

'Big Gretch - The Return' was a petite sour saison beer, heavily dry hopped with mango and came in cans. For 'Thanks Big Gretch,' Rake says he decided to take things up a notch, creating an imperial sour beer, conditioned in blueberries and lemons. The new version is also in bottles instead of cans and sports a brand new label.

'Thanks Big Gretch' packs a punch with 9% ABV.

"The popularity of this beer is something we never expected," added Rake. "During this pandemic, there haven't been any beer festivals to attend so people can taste-test us and get to know our business. Big Gretch has certainly helped bridge that divide for us."

Rake also says that he's been in close contact with Gov. Gretchen Whitmer and she's been more than supportive of the beer. In fact, she's awaiting a case of this latest version to be delivered to her in Lansing sometime next week.

"During the previous two releases, we know that quite a bit of the beer made it to her," said Rake. "Calling the beer 'Big Gretch' isn't taking a shot at her. Instead, it's more of a term of endearment for all that she and her administration have done to help Michigan get through this crazy crisis."

Rake says he does anticipate another sell out with 'Thanks Big Gretch' beer, so if you're interested in buying some, you need to be online refreshing your web browser so you don't miss out.

"We don't have a plan for another release of 'Big Gretch' beer after this one," added Rake.

'Thanks Big Gretch' beer will go up for online preorder sales Wednesday, Feb. 17 at 6 p.m. You'll need to be on the Rake Beer Project website at that time to get some.

Your beer will be available for pickup at the Rake Beer Project (794 Pine St. in Muskegon) Saturday & Sunday from noon to 8 p.m. both days.