A western Michigan lawmaker wants to make it a felony to set a booby trap like the bed of screws that injured a Wyoming police officer investigating a February break-in at a marijuana grow operation. 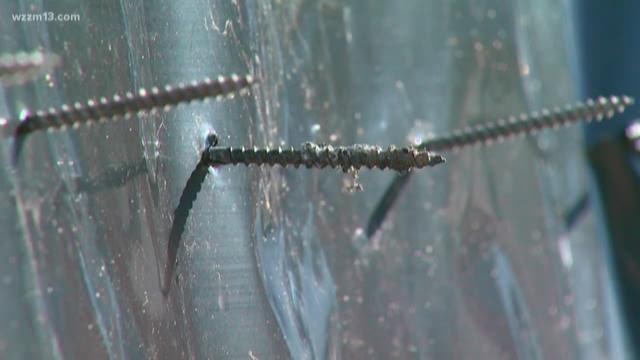 A western Michigan lawmaker wants to make it illegal to set a booby trap like the bed of screws that injured a Wyoming police officer investigating a February break-in at a marijuana grow operation.

The so-called ‘booby trap’ bill, sponsored by Rep. Tommy Brann, R-Wyoming, would make it a two-year felony to place “a contraption or device capable of causing injury or death.’’ If someone is killed, the penalty would increase to 15 years in prison.

“It expands the definition of what is a booby trap and that’s a good thing,’’ Brann said. “I think it protects not just officers but the mailman or a person coming to a house like a paramedic and doesn’t know there’s a booby trap.’’

There are no laws in Michigan that address booby traps like the one that injured Wyoming officer Dustin Cook at a medical marijuana grow site on Clay Avenue north of 54th Street SW.

The six-year veteran scaled a gate to reach a broken window at the facility. On the other side was a sheet of plywood with more than 100 three-inch, threaded decking screws pointing upward. His feet were impaled.

“I couldn’t believe there wasn’t something on the books that addressed this type of situation,’’ Wyoming Police Chief James Carmody said Thursday. “Officers face risks every day; they shouldn’t have to worry about somebody setting booby traps at a marijuana grow.’’

“We searched the books and couldn’t find anything covering this,’’ Becker said. “There’s a spring-loaded statute under state law, but clearly it did not apply to decking screws in a board.’’

“Obviously, this is something that is needed to hold people accountable in the future,’’ he said.

Brann’s bill makes it illegal for people to place a trap or allow one to be set up “in or about any place’’ where others may come into contact with it.

The two-page bill, which has no co-sponsors, has been referred to the House Committee on Law and Justice.

Events that led to the officer’s injuries unfolded about 1:30 a.m. on Feb. 12 when Wyoming police responded to an alarm at the licensed medical marijuana grow operation. The grey brick building was enclosed by a fence.

Two men dressed in black broke a window to enter the building. The fled, but were eventually caught, convicted and placed on probation for three years.

Police found an elaborate marijuana grow operation with 87 mature plants. The grower, who had more plants than allowed under Michigan law, was convicted of maintaining a drug house. A judge in June placed her on probation for a year and ordered that she perform 150 hours of community service.