Bringing the rapids back to Grand Rapids

The efforts continue to return the rapids to the Grand River. 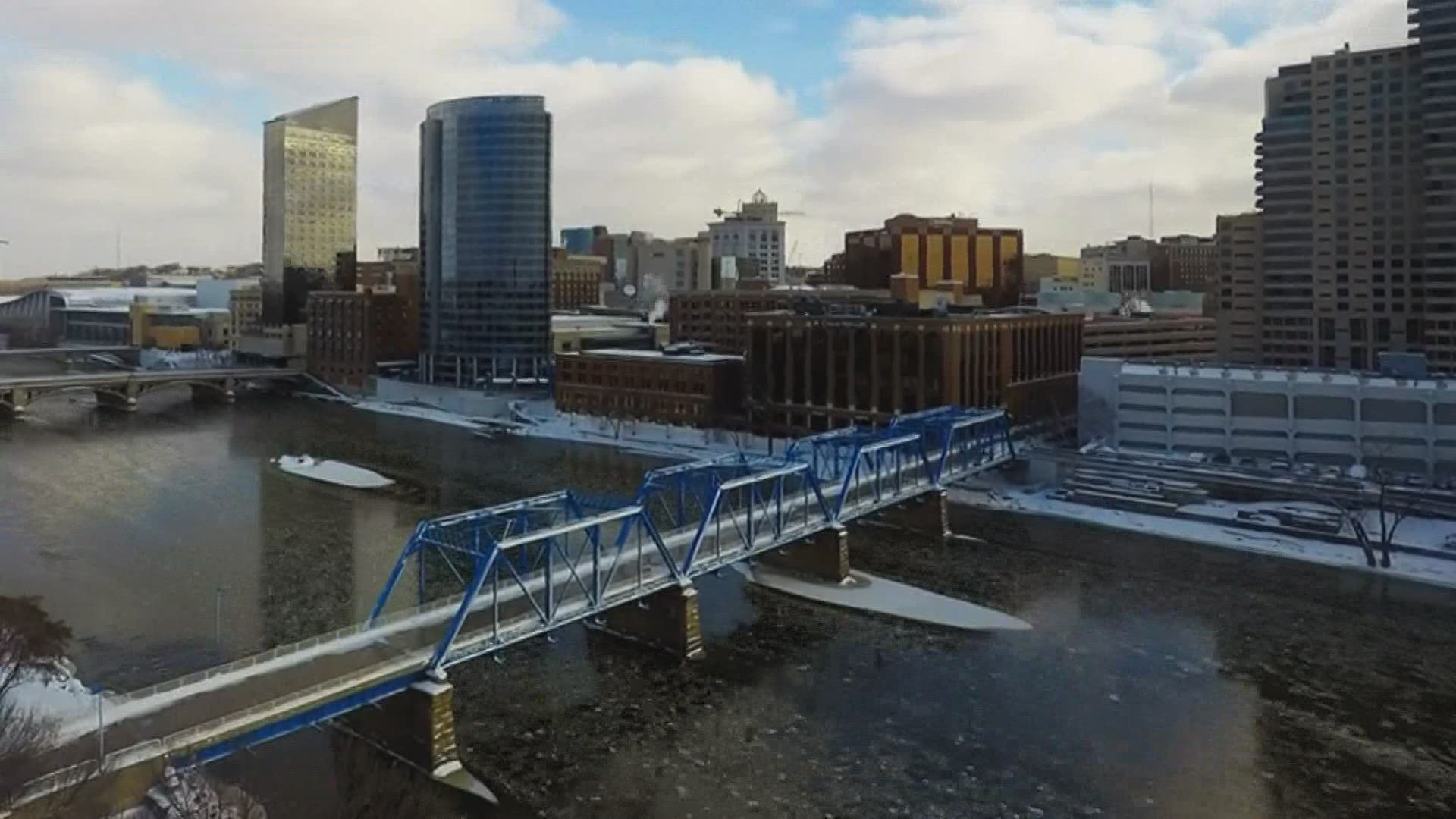 GRAND RAPIDS, Mich. — Grand Rapids gets its name from the Grand River — which runs through the middle of town, and the rapids — which used to be part of the river. The rapids disappeared more than 150 years ago when the first of many dams was installed, but those dams will eventually be removed as part of an ongoing effort to bring back the rapids.

“There's historical records that show people would find the center of the town through sound,” said Steve Heacock, president and CEO of Grand Rapids Whitewater. “They would start hearing the rapids from a mile away when they were in the woods, and they would follow that sound to the center of the city.”

Grand Rapids Whitewater is a non-profit corporation that’s one of the main proponents of the efforts to return the rapids.

“It's over 10 years old really, in the planning and thoughts and people's ideas,” he said. “Chip Richards and Chris Muller initially said, ‘Let's build a way for people to play, because we need something exciting, and we have this great body of water that we're not using. How do we activate? How do we make this river come alive, rather than have it be as quiet as it is? We are Grand Rapids, after all. We’re not Pools of Dead Water or something like that. Our name ought to be justified by what's going on in the river.’

"And so they started the idea, and then it kind of went through city planning processes and everything else until it got very serious five or six years ago when people finally said, ‘Okay, let's plan this out, let's start doing a design and start moving forward and getting the permitting to allow us to be able to construct the river channel that we want to build.’”

Grand Rapids Mayor Rosalynn Bliss has also been on board with the idea from its inception.

“Since the dams have been put in place, the river has sat there relatively stagnant and flat,” Bliss said. “It has to some been a divider between and the east and west side of our city. My hope is that as we restore the rapids, we're also restoring this connectivity and that it will no longer be a divider. It will be a place where people can connect with and enjoy the sights of the river.”

The cost of this project is roughly $45 million, but they’re more than 90% of the way there, which means the fundraising is no longer the biggest hurdle. Currently, Heacock said, they’re just waiting on a permit from the Michigan Department of Environment, Great Lakes, and Energy (EGLE). Once that permit is secured, the physical work of restoring the rapids can finally begin.

“It’s a massive undertaking. There are seven regulatory agencies we have to appease. We're putting probably 200,000 tons of rock back in the river,” Heacock said. “The project is really in two phases. The lower reach is from about Bridge Street to Fulton Street. There, we’re removing four dams that are under the river that you can't see. Those will come out, and then we're replacing them with four different amenities that will create waves and really at least capture the spirit of the rapids that were here once.”

There’s also an endangered species of mussel that will have to be protected.

“We have the federal permit we need to do the mussel work,” Heacock said. “So when we're allowed to construct, our plan has been accepted. That plan includes putting aside a fund for mitigation so that we keep the environment strong for those mussels and other species as it goes forward.”

“You have to do your due diligence,” Bliss said. “The last thing I would want is for us to do anything to our river that would have a negative impact on the firemen, on flooding, on fish, on wildlife. So it's an important process that we go through, and we have to make sure that we’re looking at all of the details, and that we get it right, quite frankly. It's not just a lot of money, but this is one of our most beautiful natural assets, and I want to make sure the decisions we make have a positive impact on our city for generations to come.”

As for the economic impact this will have, studies show that Grand Rapids stands to bring in an additional $16 million a year, and that’s on the low end.

“The Anderson Group did a study, and it showed 230,000 new visitor days related to the rapids and the river and what's going on,” Heacock said. “500,000 people coming in, creating $20 million of economic activity within the city. 90% of those people will not get in the river. They're here to enjoy it, see it, watch it, look at what's there, but it's very exciting. We think those are very conservative numbers.”

“It's hard to even capture what the potential impact will be,” Bliss said. “Already, just through conversations about the river restoration, we’ve also brought in that vision to really include the entire river corridor. In partnership with a lot of folks in our community, we looked at where are we with the trail, and how do we connect the trail? What are some green spaces we need to reinvest in? Can we think about doing it differently?

"Instead of just having this massive flood wall, can we create more natural berms that will also protect against flooding, but be more engaging where people can get close to the river? So we’re starting to see those projects already come to fruition. For me, when I think about the river and restoring it to its natural state, I feel like we're taking back our namesake.”