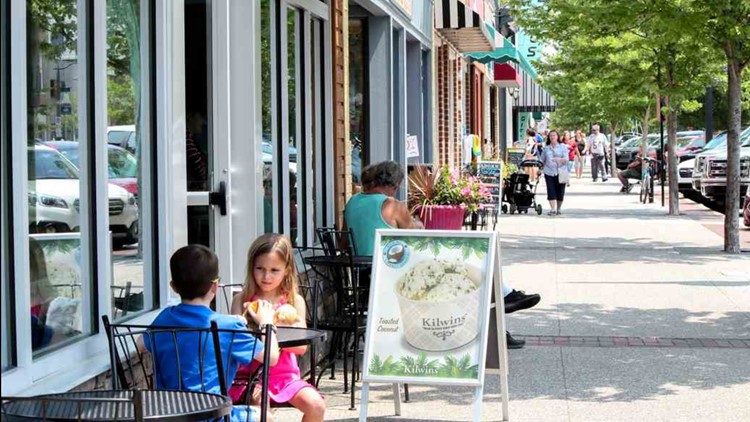 Photo by: Cora Hall / Grand Haven Tribune
Kilwins is one of many local businesses downtown that benefits from the influx of customers during the Coast Guard festival.

GRAND HAVEN, Mich. (GRAND HAVEN TRIBUNE) - For some businesses, surviving without the annual festival would be difficult. Joy Gaasch, president of the local Chamber of Commerce, said if the festival were ever to discontinue, it would be devastating to the Grand Haven area’s economy.

In 2014, the festival’s economic impact was pegged at $5 million, according to Gaasch.

Many local businesses look forward to the festival each year, such as the Kilwin’s location in downtown Grand Haven.

“It definitely brings in a lot more customers, especially with a lot of tourists in the week,” said the shop’s manager, Chloe Boomgaard. “It definitely slows us down a little bit when they have all the vendors out there, but on Coast Guard Saturday, we’re slammed the whole night. That Saturday is pretty important for us. It’s definitely one of our biggest days of the summer.”

Steve Vink experienced the Coast Guard Festival for the first time at his Tip-A-Few restaurant and bar 41 years ago.

“It helped us tremendously back then, but it also made us humble because, experiencing it for the first time, there was an awful lot of people in town (and it) gets very busy,” he said. “But it’s been a fun thing.”

The festival is now less of a necessity and more of a nice bump in business, Vink said.

“It does help, it does get (us) through,” he said. “There’s a lot of people in town, they do have a lot of fun, so it does impact us. It’s what we look forward to. It’s where we make all the money so we can give our bonuses out and pay our people for working so hard in the summer.”

Steve Loftis — the owner of Snug Harbor, Jelly’s, Grand Seafood Oyster Bar, the Theatre Bar, and Dee Lite Bar and Grill — said he and his teams are looking forward to the festival, but they see it from a community perspective rather than an economical one.

“It’s just a great community celebration,” Loftis said. “We look at it more from a community standpoint in terms of what’s good for the community is good for us. We’re here 365 days a year, but we’re here to make sure we have our act together and that we, as a community, we put on a good festival and we’re all part of that.”

Tourists from out of town mean hotels fill up — and Kendra Gardner, who has been a manager at Best Western for 18 years, said they will be booked full almost every day of this year’s festival.

“I think we could survive without it, but we’d rather not,” she said. “It is, of course, the time we make the most money, but every weekend in July and August is huge for us … and really, weekdays in July and August are pretty full, as well.

“We, of course, look forward to it, it’s a lot of fun, but it is a lot of work,” she added. “Most people are super happy, really cool and just excited to be here, so the vibe for the next few weeks is going to be really great.”

Gardner said that while they do sometimes get rowdy guests during the festival week, it’s not a bigger issue than on other summer weekends.

Owning a bar downtown, Vink said he is prepared for any issues that can arise with the amount of people that come through during the festival week.

“You’re always going to have the fringe people that can cause a little problem, but we’re more geared up for it,” the Tip-A-Few owner said. “We anticipate everything. We have our good rapport with the police department and fire and safety, and we have cameras in here, so it helps an awful lot. We’ve learned over the years how to manage it, and I think it’s just a happy time for everybody.”