A trial for a Battle Creek man charged in the June fatal bicycle crash is expected early next year. 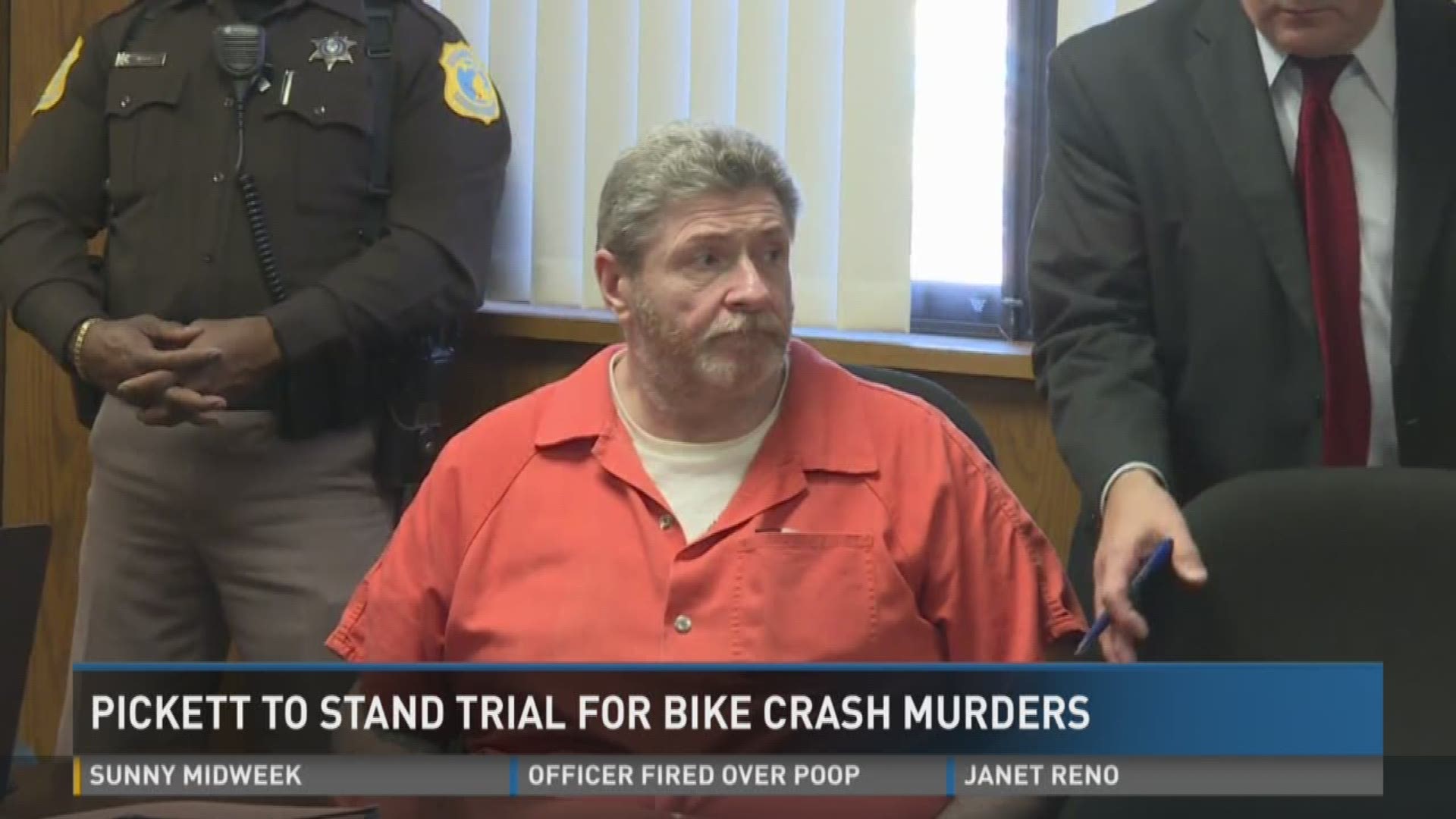 A trial for a Battle Creek man charged in the June fatal bicycle crash is expected early next year.

The people killed in the crash were: Debra Bradley, 53; Melissa Fevig-Hughes, 42; and Suzanne Sippel, 56, all of Augusta, and Fred Nelson, 73, and Lorenz Paulik, 64, both of Kalamazoo.

More: Kalamazoo driver in crash that killed 5 bicyclists took up to 30 pills

The injured were Paul Gobble, 47; Sheila Jeske, 53; and Paul Runnels, 65; all of Richland, and Jennifer Johnson, 40, of Kalamazoo. They were among the spectators Monday and all four are expected to testify at Pickett's trial.

Pickett faces up to life in prison if convicted. He was arrested after police and prosecutors said he drove his pickup truck into the nine bicyclists riding on North Westnedge Avenue near G Avenue in Kalamazoo County's Cooper Township. Five people died at the scene and four were seriously injured.

Sgt. James Campbell of the Michigan State Police testified his accident reconstruction showed Pickett was traveling northbound at a minimum of 58 mph in a 35-mph zone when he hit the cyclists, also northbound and riding single-file on the outside shoulder of the roadway.

Campbell said he found parts of bicycles embedded in the front of the pickup and blood and a bicycle tire in the bed of the truck, evidence that people and bikes were thrown over the truck.

"There was no evasive action," he said, even though he said it takes a driver 1.5 seconds from perception to a reaction and a half-second for a driver to move his foot from the gas pedal to the brake.

A nearby resident told the judge he was walking home after fishing at a park along Westnedge Avenue when someone yelled to look out and the blue pickup passed him and struck the cyclists before he could warn them.

"I saw him swerving all over the road," Markus Eberhard, 21, told Assistant Prosecutor Mike Kanaby. "I would have gotten hit if I didn't move out of the way and I couldn't yell in time to tell the bikers to watch out."

He said he saw cyclists thrown into the air by the impact.

"It sounded like a car hit a tree," Eberhard told defense attorney Alan Koenig. "It was a pretty loud impact."

Cassie Fieberkorn testified she lives on Westnedge Avenue near the crash site and saw the cyclists pass and then heard a screech of tires and a loud bang.

She ran to the scene and saw shoes and water bottles and pieces of bikes in a debris field that police said stretched 312 feet.

She also saw the man she identified at Pickett standing near the rear of his truck.

"He wasn't assisting or trying to help and the next I knew he disappeared," Fieberkorn said.

Kalamazoo Township Police Sgt. Darien Smith was the first officer to arrive and said he found Pickett farther up the road in some woods. His speech was slurred and he was stumbling, Smith said.

"He seemed completely out of it and I believed he was under the influence of something."

A lab specialist from the Michigan State Police, Samantha Beauchamp, said blood drawn from Pickett soon after the crash showed high levels of four drugs, including methamphetamine and hydrocodone and evidence of three other narcotics. She said the combination of the stimulants and the depressants would make a person aggressive and "like someone was drunk."

Kanaby also called several witnesses who identified the pickup. Some of the witnesses said Pickett was the driver who was swerving on roads near the accident scene within 30 minutes of the crash.

Craig Butler said Pickett was tailgating his car and then passed in on the right on Nichols Road and as he passed "looked and smiles and laughed at me."

Charles Pickett Jr., of Battle Creek in court on Monday.

Alvar Carlson said he saw Pickett crossing two lanes and driving toward him and another driver on the Arboretum Parkway. Melissa Schultz said she saw Pickett drive off the roadway and hit a street sign near Kalamazoo Central High School and Williams Myers said a blue pickup drove through his yard on G Avenue and continued toward Westnedge Avenue, blocks from the crash site.

"There is good evidence that he was driving and was under the influence of multiple drugs and caused the death of five people and injured four more," Prosecutor Jeff Getting said after the hearing.

Pickett remains in the county jail.