Criminal groups from Illinois are coming to western Michigan to pass counterfeit money, including a trio arrested last fall for passing fake $100 notes. 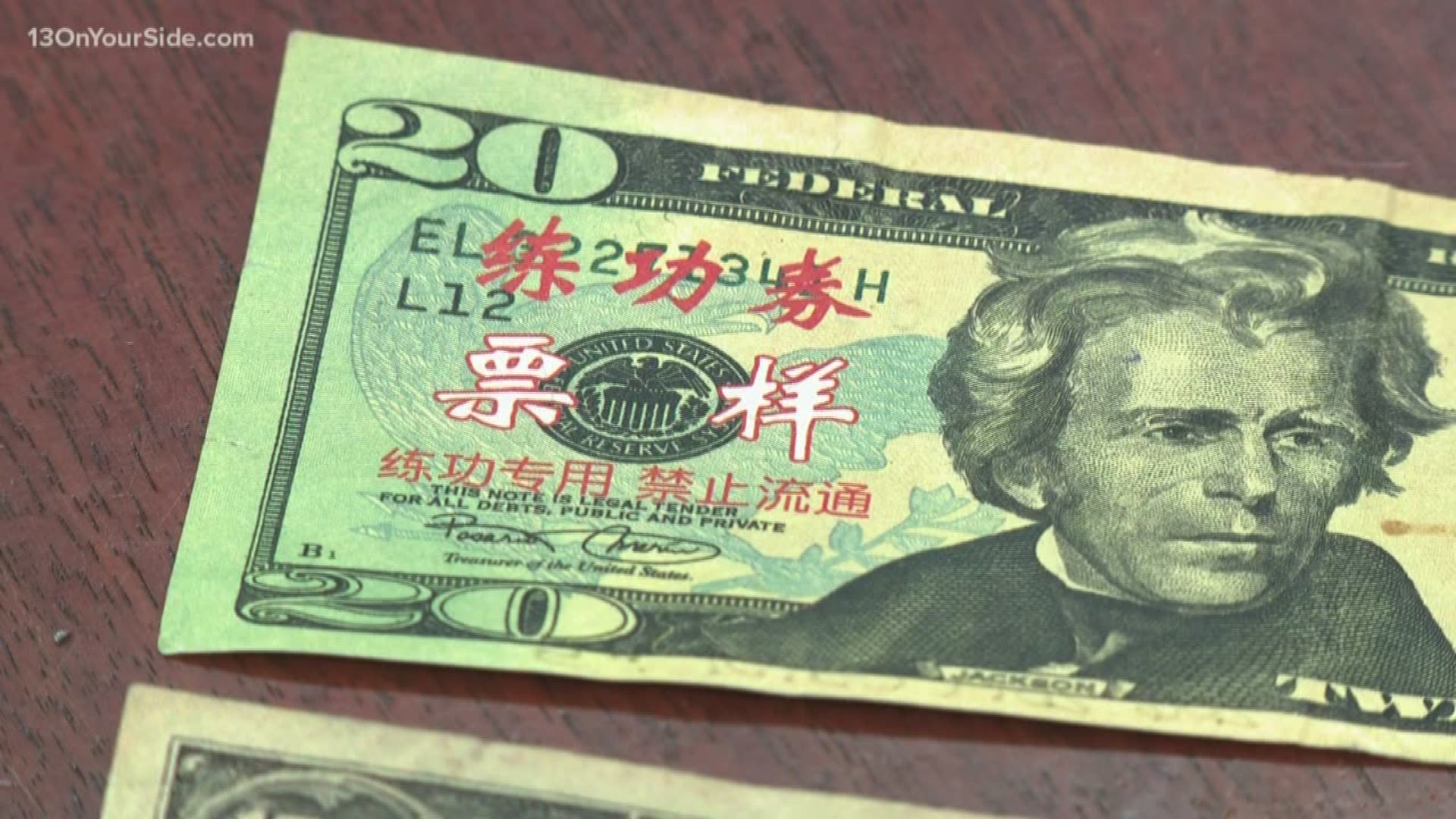 GRAND RAPIDS, Mich. — An Illinois man who passed fake $100 bills at Grand Rapids area businesses, and then got into a crash while fleeing police, was sentenced to prison Thursday for what the judge called “a very calculating attempt to defraud and rip off people of Kent County.’’

Trent Young was the head of an Illinois trio arrested in October for passing counterfeit bills at 13 shops at Tanger Outlets in Byron Township.

“It was a very focused attack on a single retail location,’’ Kent County Sheriff’s Sgt. Joel Roon said. “The number of stores that this group was able to hit in a very short amount of time was staggering.’’

Young, a convicted felon who’s been arrested in multiple states, fought with police and had to be subdued with a taser after he was found hiding in a backyard shed.

“It required planning. It required equipment. It required labor. It required you to drive 180 miles from Chicago to Kent County,’’ Benson said. “So it was a very well thought out, very calculating attempt to defraud and rip off people of Kent County.’’

Benson sentenced Young to between five and 20 years on numerous offenses, including organized retail crime and passing counterfeit bills.

Prior to sentencing, Young, 27, asked for leniency, saying he had a difficult childhood. “I grew up very, very poor; I pretty much raised myself,’’ he told the judge.

Benson noted that Young was on parole from Illinois and out on bond from Wisconsin when he was arrested. His prior convictions include armed robbery, burglary, selling drugs and battery of a police officer.

“It tells me that you pose a threat to society whether you live in Michigan, Illinois or Wisconsin,’’ Benson said. “When you got caught, the wheels came off. You took off running; you put people’s lives at risk.’’

The Kent County Sheriff’s Department was called to Tanger Outlets on Oct. 4 on a counterfeit money complaint involving $10 bills that had been bleached and reprinted to make them look like $100 notes.

Credit: John Hogan
Tanger Outlets in Byron Township was targeted by counterfeiters in October of 2018.

Responding deputies pursued the fleeing vehicle, but terminated the chase when the driver, identified as Young, started weaving in and out of traffic.

The fleeing vehicle crashed at 84th Street and Burlingame Avenue SW. Young ran into a subdivision and was found hiding in a garden shed.

“Mr. Young didn’t cooperate with anything from start to finish in this investigation, including coming out of that shed,’’ Roon said.

Inside Young’s car, police found retail bags from more than two dozen stores, including those at Tanger Outlets.

“So this was the type of thing where they were hitting store after store, and unfortunately, Tanger was just one stop along the way,’’ Roon said. “This didn’t appear to be the first time that they’d ever done this.’’

Federal investigators say $1 bills were bleached and printed over to appear like $100 bills. Passing counterfeit U.S. currency is punishable by up to 20 years in prison and a $250,000 fine.

“I would say probably over the last year or so, we’ve seen more of the bleached notes being passed locally,’’ said Steven McMahon, resident agent in charge of the U.S. Secret Service office in Grand Rapids.

“Oftentimes, counterfeiters are trying to purchase items that are small to maximize the amount of money they get in return,’’ McMahon said. “It’s really almost targets of opportunity.’’

Roon, the Kent County sergeant, said it is not uncommon for counterfeiters to travel out-of-state to pass bogus currency.

“The bad guy understands that if they go and commit a crime elsewhere and are able to make it out of that area, it makes it a little more difficult for the police to catch up with them,’’ Roon said. “That’s just a reality of the game.''