Keith Eric Wood appealed his conviction, arguing the jury tampering statute was vague and didn't apply in his case. 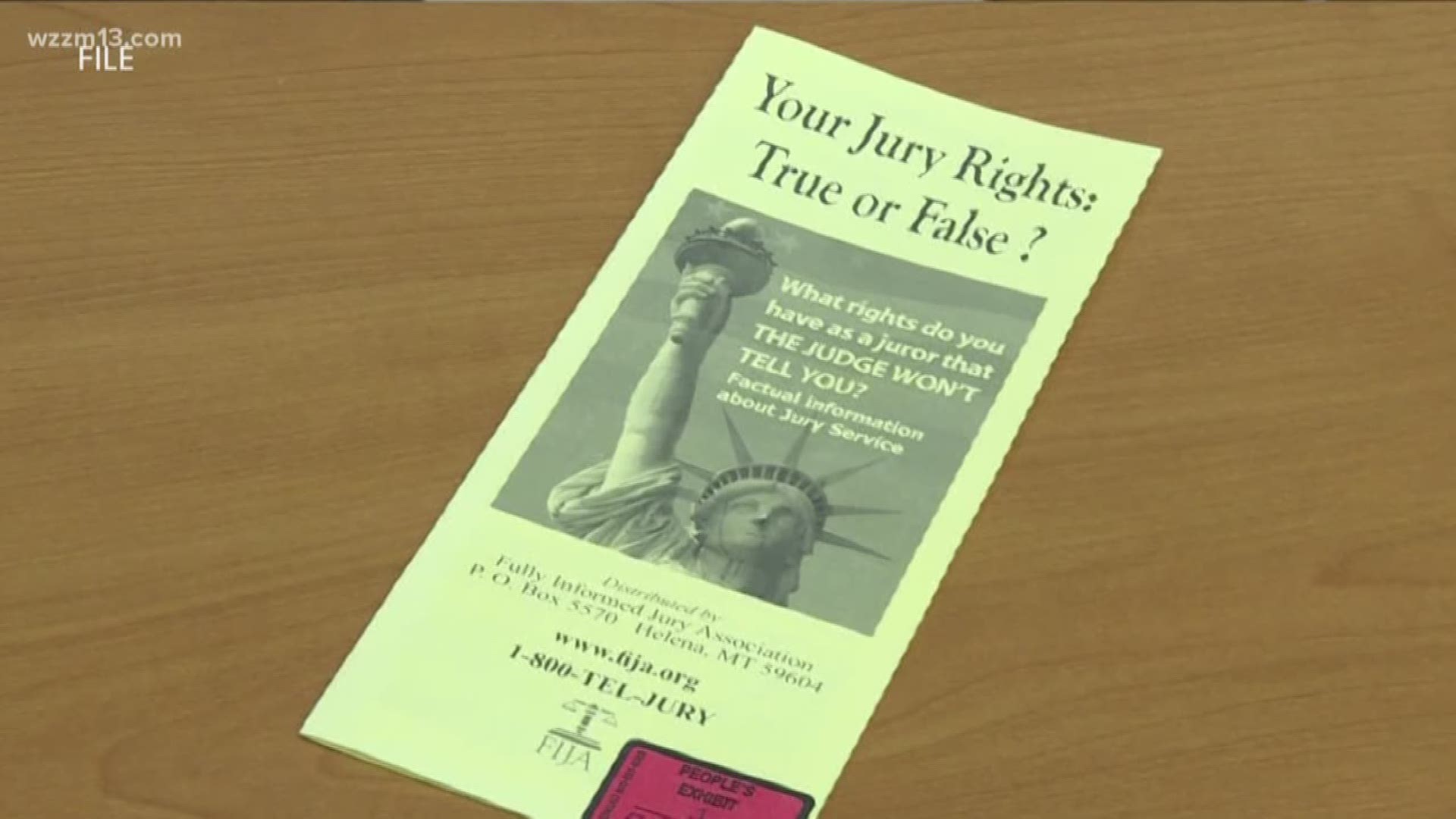 BIG RAPIDS, Mich. - A divided Michigan Court of Appeals has upheld the jury tampering conviction of a Mecosta County man, who was arrested for distributing pamphlets about juror nullification outside a Big Rapids courthouse.

A jury last year deliberated about 30 minutes before finding Keith Eric Wood, 41, guilty of jury tampering, a misdemeanor punishable by up to a year in jail.

Wood appealed his conviction, arguing the jury tampering statute was vague and didn't apply in his case. Wood also said his conviction violated his First Amendment right to free speech.

In a 15-page ruling released this week, the Court of Appeals upheld a circuit court decision that affirmed Wood’s conviction.

In a two-page dissent, Justice William B. Murphy said the criminal statute does not apply because two women handed pamphlets while reporting for jury duty “were simply not jurors in the case.’’

Wood also said he was denied a fair trial because the district court judge who heard the case would not let him cross-examine Magistrate Thomas Lyons regarding purported bias. Lyons set a $150,000 bond, which required Wood to post 10 percent to get out of jail.

The Appeals Court said Lyons’s testimony “merely provided context for the events of the day.’’

“Moreover, we see nothing to suggest that the jury would have reached a different result had it concluded that Magistrate Lyons was biased against defendant and not credible,’’ justices Murray and Cameron wrote.

Wood was convicted of jury tampering for attempting to influence jurors when he stood in front of the Mecosta County courthouse “distributing pamphlets to those he knew to be potential jurors in a case set for trial that day,’’ according to the appeals court decision.

The matter arose out of Wood’s interest in a criminal case involving Andrew Yoder, a member of the Amish community who had been charged with illegally draining wetlands. A trial was set for Nov. 24, 2015.

Wood stood outside the courthouse on the day of trial and passed out pamphlets entitled: “Your Jury Rights: True or False?’’ The pamphlet explains that jurors may vote according to their conscience.

Wood, a father of eight, was arrested and charged with obstruction of justice and jury tampering. The Yoder case, meanwhile, never went to trial because the parties reached a plea agreement.

The obstruction charge was later dismissed, but a two-day trial was held on the jury tampering charge. He was convicted in the summer of 2017 and sentenced to eight weekends in jail. Wood was also placed on probation for six months and ordered to perform 120 hours of community service.

Wood filed an appeal; a circuit court judge in February of 2018 upheld the conviction. The case then went to the Court of Appeals. The 15-page decision released Tuesday, Dec. 11 was published, meaning it is binding on lower courts.