‘I knew there was something wrong,’ grateful grad of veterans court says

Jordan Hull is one of four servicemembers who graduated Friday from Kent County Veterans Treatment Court, which started in 2016 to provide veterans charged with a crime an alternative to jail. 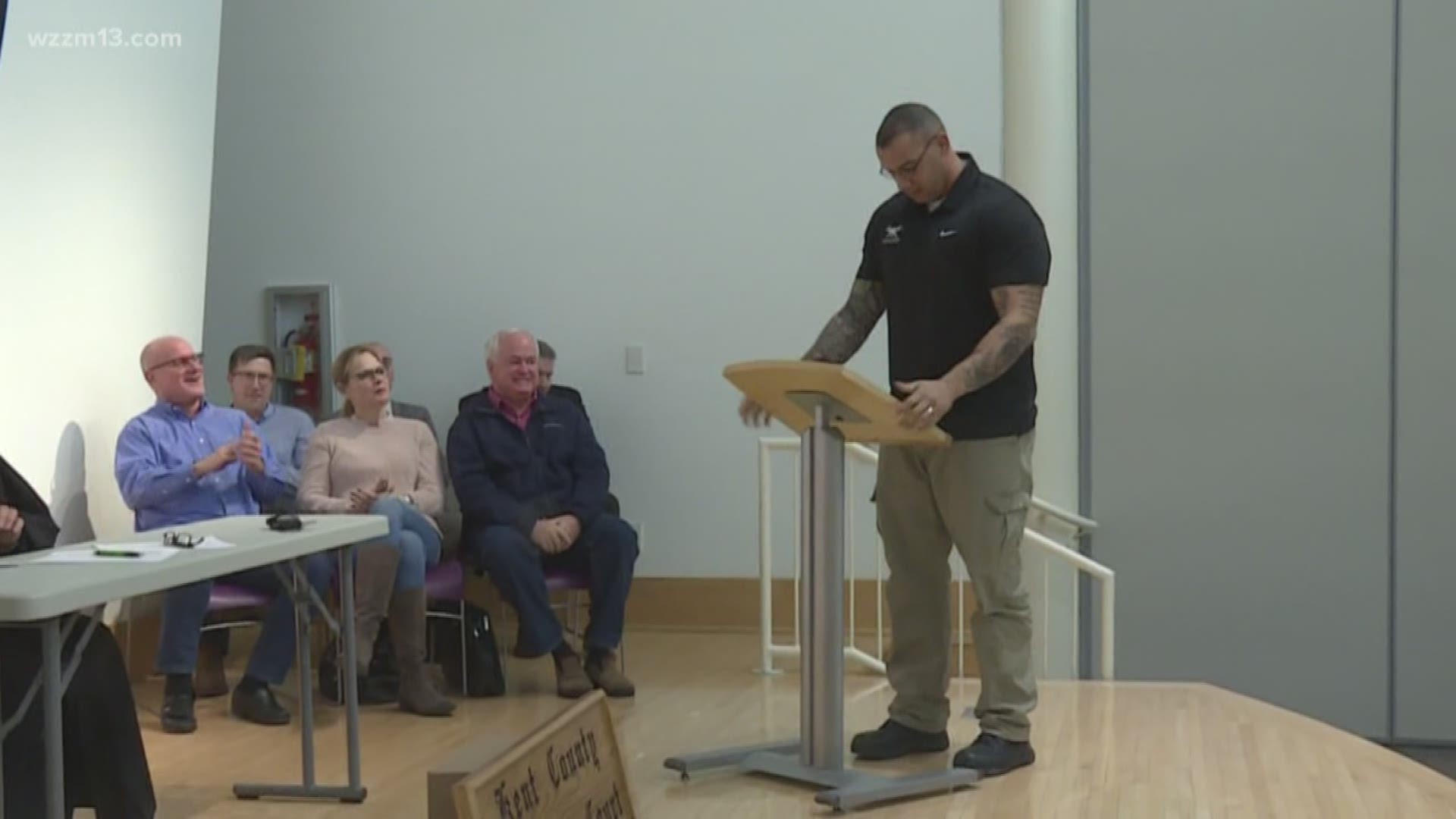 WYOMING, Mich. — When Jordan Hull got out of the U.S. Marine Corps in 2012, the former farm boy from Wisconsin found the transition to civilian life was more challenging than he expected.

“Coming home, it was difficult for me to adjust,’’ Hull said. “I didn’t realize I really had a problem because most of the time, I was hanging around other veterans and it’s just the norm.’’

At the core was anger issues. “I was mad at everybody but me,’’ he said.

The married father of three found himself losing his temper at home. Although he never laid a hand on anyone, the violent outbursts, Hull said, were frightening for his family.

He eventually found himself in front of a judge on a misdemeanor charge of domestic violence. Hull, a former corrections officer in Muskegon, did not much like the prospect of spending up to 93 days in jail.

Hull, 29, is one of about four dozen military veterans to participate in the Kent County Veterans Treatment Court, which got its start in May of 2016. It operates out of Wyoming’s 62-A District Courthouse.

“I realized it’s either this or the alternative: my kids get to see me shackled up,’’ Hull said. “I didn’t want that.’’

Michigan lawmakers in 2013 created the specialty courts to address the growing number of returning veterans with mental health and substance abuse issues.

There are 25 such courts in operation statewide. Veterans charged with certain misdemeanor and felony offenses are eligible for participation in the voluntary program. They can see charges reduced and avoid time behind bars.

Participants meet twice a month with the judge. They also meet with probation officers and are subject to random drug and alcohol testing and occasional home visits.

“This is the most rewarding part of my job, I think,’’ said Wyoming District Court Judge Pablo Cortes. “In a way, it’s almost like a family - with the stern dad.’’

Cortes presides over the Kent County Veterans Treatment Court. On Friday, he oversaw a graduation ceremony for four veterans who successfully completed the program, including Hull. The event was attended by alumni as well as politicians and members of the criminal justice system.

Cortes says the program has helped struggling veterans get back on their feet and find direction.

“It helps put them back on the right track and gives them the resources to continue to grow and get better,’’ Cortes said. “We can lay the groundwork, give them the structure. Give them a good head start.’’

Hull left Friday’s graduation ceremony with a framed certificate and sense of purpose.

“The judge has always told us you’re more than welcome to come back and visit, which I am still planning on doing,’’ Hull said. “I love helping out other veterans.’’

Hull, who is involved in VetGR, says the western Michigan charitable organization contributed to his success.