Marcellino Vasquez, 50, is accused of exposing himself to women in Wyoming and Grandville; a similar red bandana mask was seen by his victims. 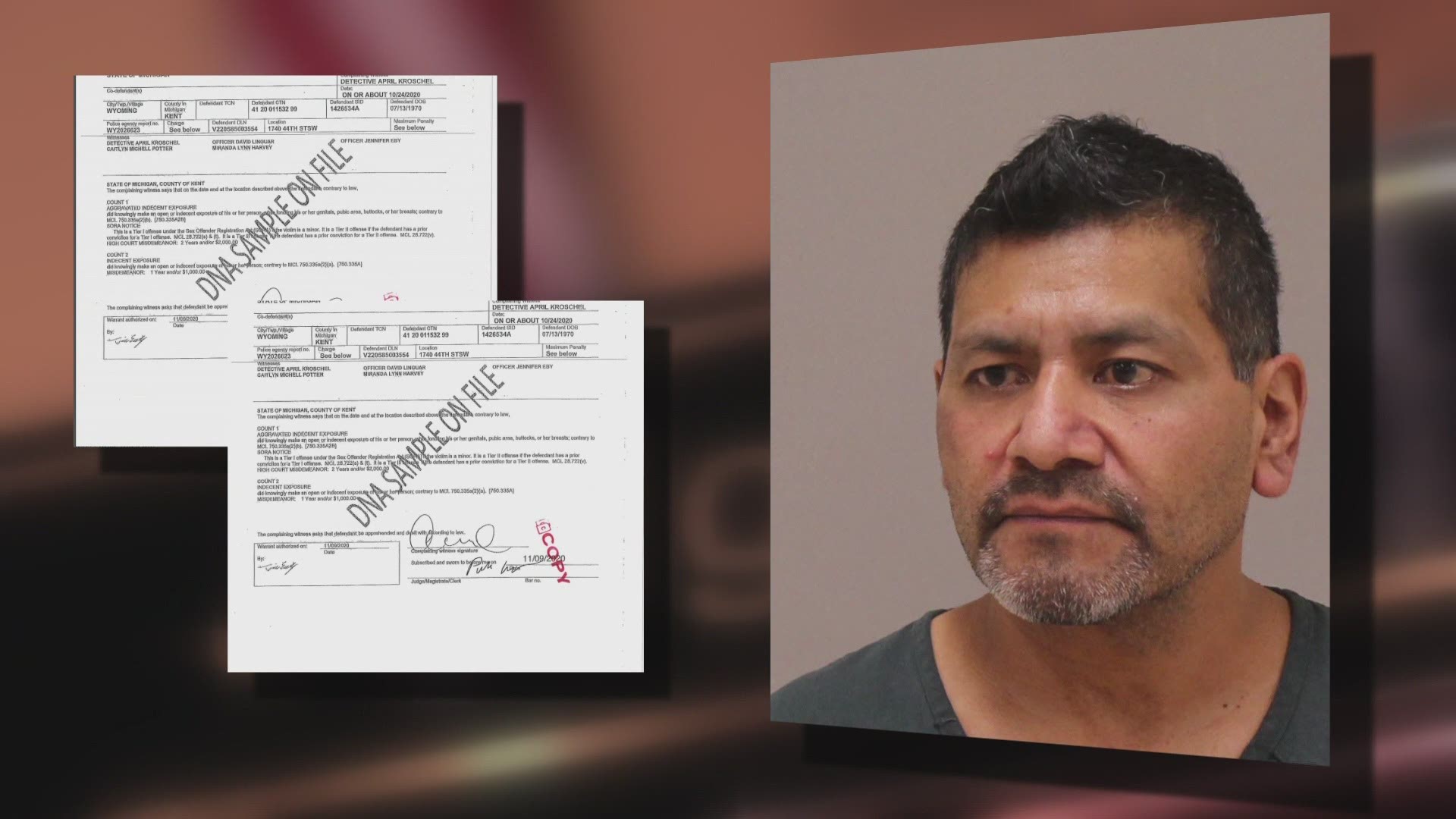 GRANDVILLE, Mich. — For about two weeks, 50-year-old Marcellino Vasquez exposed himself to unsuspecting women in Wyoming and Grandville, including multiple times in a health club parking lot near his apartment, police say.

A colorful face covering worn during the incidents led to his undoing – and an additional felony count, court records show.

Vasquez faces multiple charges, including indecent exposure by a sexually delinquent person, which could keep him locked up for years. He is in jail on combined bonds of $155,000.

Vasquez is accused of exposing himself starting on Oct. 22 and continuing until Nov. 5 - the day he was arrested.

Police recovered a red bandana face covering described by victims in the various cases. Detectives say Vasquez tossed it from a police car following his arrest; it brought a felony tampering charge.

Maguffee said detectives from Wyoming and Grandville worked together on the case, which helped expedite an arrest.

Grandville police launched an investigation after receiving a report that a man was exposing himself outside Premier Athletic & Tennis Club, a workout facility associated with Ramblewood Apartments, court records show.

Meanwhile, a detective in Wyoming was investigating an Oct. 24 incident outside a Subway restaurant on 44th Street SW. In that case, a man exposed his penis and fondled himself in front of the victim.

Detectives from Wyoming and Grandville were able to zero in on Vasquez based on interviews and a similar red bandana seen on surveillance video.

According to court records, Ramblewood staff said Vasquez was recently inquiring about the workout facility while wearing a similar red bandana seen on surveillance footage.

Vasquez was arrested on Nov. 5 after police say he exposed himself in the fitness center parking lot in broad daylight. The victim took photos.

“The photos appeared to be Marcellino Vasquez,’’ a Grandville detective wrote in a probable cause affidavit.

When police knocked at his apartment door, Vasquez answered and identified himself.

“He was wearing the same red bandana mask,’’ a detective wrote. “The defendant was advised that the bandana, which he was using as a COVID mask, was an integral part of identifying him as a suspect.’’

Vasquez was arrested. While being transported to the police department, Vasquez “threw the red bandana out the window,’’ court records show.

It was recovered. He was charged with tampering with evidence, a four-year felony.

A search of his apartment turned up clothing that matched what was described by victims in the indecent exposure incidents.

Vasquez, who has a criminal past, has hearings pending in district courts in Grandville and Wyoming.

Indecent exposure by a sexually delinquent person is punishable by an alternative sentence of one day to life.

“I’ve tried to stop figuring out these knuckleheads a long time ago as far as what makes them tick,’’ Maguffee said. “I think our responsibility is to try and make sure we’re doing everything we can to make people feel safe when they’re going about their lives.’’