A Kent County jury on Friday found former state representative Roy Schmidt not guilty of driving under the influence of marijuana. The misdemeanor charge stems from a Sept. 2017 traffic stop in Ada Township. 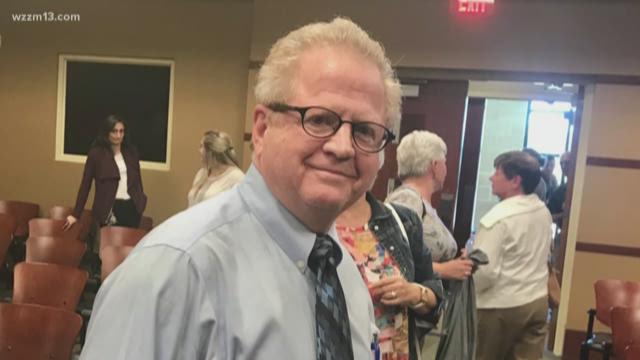 GRAND RAPIDS TOWNSHIP, Mich. - A former state lawmaker found not guilty of driving under the influence of marijuana says his prosecution was a “witch hunt’’ and an affront to people who use marijuana for legitimate medical treatment.

"Medical marijuana is legal; targeting drivers who use it is wrong,'' Roy Schmidt said outside 63rd District Court Friday afternoon. "This is tearing apart Michigan; putting people in jail like this.''

A jury of three men and three women found Schmidt not guilty of operating under the influence of a controlled substance, a 93-day misdemeanor. Jurors deliberated less than an hour before reaching a verdict early Friday afternoon. The trial lasted two days.

Schmidt, a medical marijuana cardholder, spent time in jail more than two years ago for delivery/manufacture of marijuana. It was a highly-publicized case involving raids at his Grand Rapids home and a nearby rental home.

The 64-year-old Grand Rapids native was discharged from probation in that case in June of 2017. About 2½ months later, he was arrested by the Kent County Sheriff’s Department following a traffic stop in Ada Township.

Schmidt says he had just dropped his son and daughter-in-law off in Lowell following a Sept. 16 family wedding and was heading back to Grand Rapids when he was stopped on M-21 near Amway headquarters.

As a medical marijuana user, it is not illegal for Schmidt to have marijuana in his system. The question for jurors was whether Schmidt was driving under the influence.

“There were no issues with his driving,’’ defense attorney Joshua Covert told the jury during closing arguments Friday. “Whether or not he was under the influence and it had a substantial effect on his driving is why we are here.’’

Covert said Schmidt was not driving erratically prior to the traffic stop. He had trouble balancing during a roadside test, but it was because of a closed-head injury suffered in a car accident four months earlier, Covert said.

“They’re alleging those balancing issues are a result of him ingesting cannabis, and not the result of his pre-existing condition,’’ he said. “That was not the case.’’

Kent County Assistant Prosecutor Michael Sheehan said he was disappointed in the verdict, but respects the jury’s decision.

After putting Schmidt through a series of tests following the traffic stop, a drug recognition expert “concluded he was under the influence of cannabis at the time,’’ Sheehan said. “That’s why we decided to go forward.’’

“We don’t take this lightly,’’ Sheehan added. “We move forward on these cases because recent studies show that drugged driving has surpassed drunken driving and crashes that involve deaths.’’

Schmidt, who served 16 years on the Grand Rapids City Commission and then four years in the Michigan House, was sentenced to 45 days in the Kent County Jail in April, 2016 after pleading no contest to manufacturing marijuana.

He was arrested in June, 2015 after raids at two homes connected to him yielded three pounds of marijuana and 71 marijuana plants.

Schmidt says he believes he was pulled over last September because of his background, rather than erratic driving.

“People in Michigan and Grand Rapids do not need to go through this court system for a whole year like I did, living in agony,’’ he said. “The jury came back and found me not guilty in less than an hour.’’

Medical marijuana users, he said, should not have to live in fear of being pulled over.

“Stop persecuting marijuana and saying it doesn’t help,’’ he said outside 63rd District Court in Grand Rapids Township. “It has saved many lives and we need to stop prosecuting it.’’