Jared Chance, 29, is being held on a $750,000 bond following his arraignment Wednesday, Dec. 5 on two felony charges stemming from the discovery of a woman's dismembered body inside his Southeast Side home on Sunday. 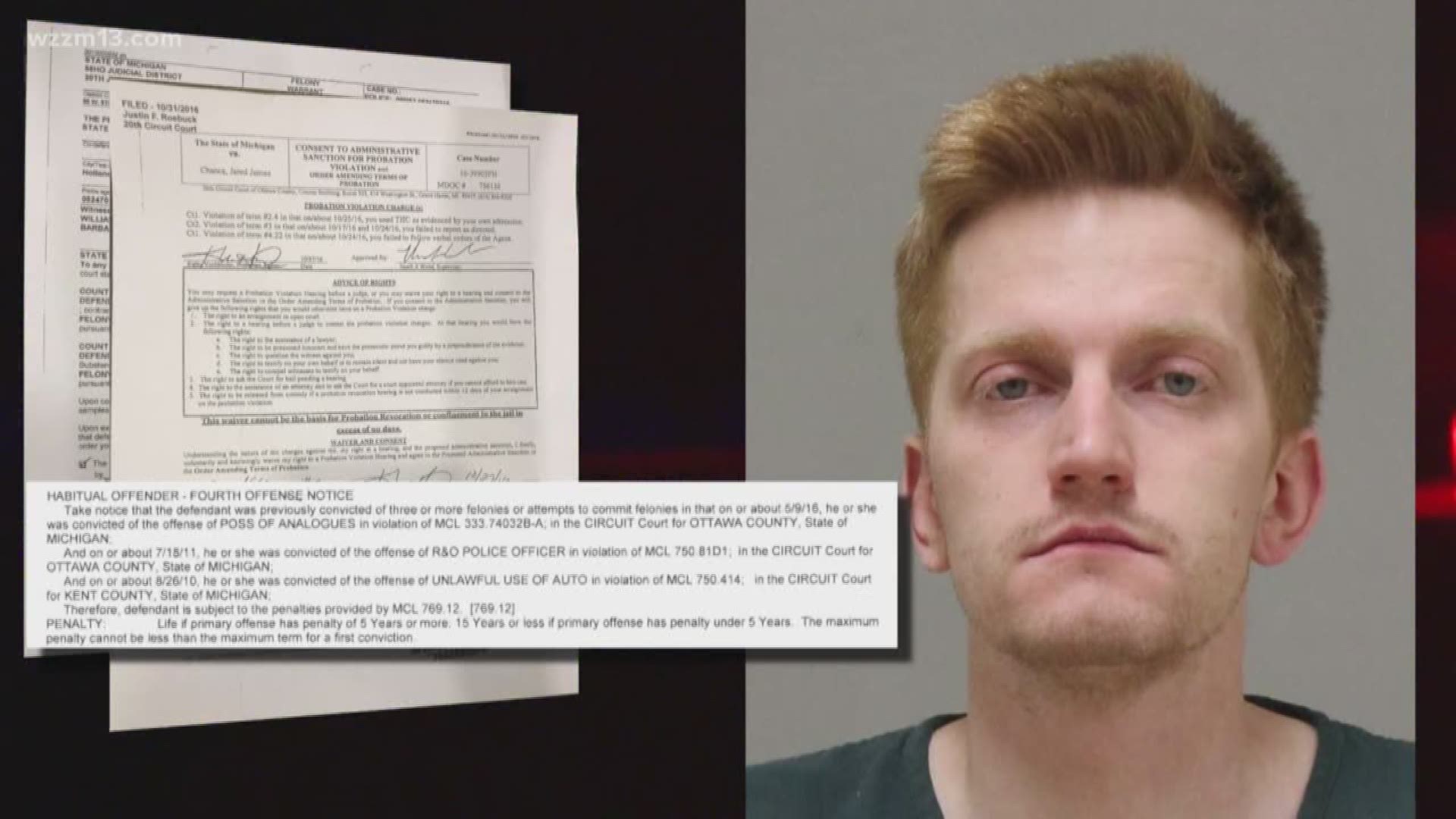 GRAND RAPIDS, Mich. - A woman's torso found in a Grand Rapids basement has led to felony charges against a man who lived at the Southeast Side home where Sunday's gruesome discovery was made.

Police still have not positively identified the human remains, which were found in a bag. The woman is listed in court records as Jane Doe.

On Wednesday, 29-year-old Jared James Chance was charged with mutilation of a dead body and concealing the death of an individual.

The mutilation charge is a 10-year felony while concealing a death carries a five-year term.

Court records indicate the offenses occurred on or about Friday, Nov. 30 at a home on Franklin Street near Dolbee Avenue SE where Chance lived in an upstairs apartment.

Grand Rapids police were called to the house Sunday afternoon after a tenant went into the basement to investigate a strange smell. The man located what appeared to be a bag or a tarp with blood coming out of it. He left the basement and called 9-1-1, according to a five-page court document released Thursday, Dec. 6.

"Officers arrived at the scene and were able to slightly open up the bag and see that inside of it was a human body,'' Grand Rapids Police detective Erika Fannon testified while swearing out a warrant seeking criminal charges.

Police obtained a search warrant for the house. A search of an upstairs apartment where Chance lived revealed other body parts "that are suspected to have belonged to the torso located in the basement,'' Fannon testified.

Police located "several areas of blood'' inside Chance's apartment. Detectives also recovered "articles of cleaning and articles that would be used to - could have been used to dismember a human body that were located on the property,'' Fannon testified.

Chance, who once lived in Holland, has a criminal record dating back to when he was 15 years old. His offenses as a teen include shoplifting and possession of alcohol. He has several driving offenses, including a drunken driving arrest in Allegan County.

Chance in 2016 was convicted of possession of methadone and possession of Oxycodone for offenses in Ottawa County. He was placed on probation, but his probation was terminated in October of 2016 for three violations, including marijuana use.

Because of his past convictions, Chance is being charged as a fourth-offense felony offender, which could increase his maximum sentence to life in prison. The offenses cited are possession of analogues, resisting and opposing a police officer and unlawful use of an auto.

In the latter case, Chance was arrested in July of 2009 after taking a friend’s Ford Escort in Grand Rapids and driving to Holland, where he left the car in the middle of the road. At the time, he was living with his parents on W. 20th Street in Holland.

Chance was unemployed and had issues with anxiety, court records show.

During his video arraignment on Wednesday, Dec. 5, Chance said little to the judge, other than to acknowledge he understood the felony charges against him. He will be back in court later this month for a probable cause conference.

“Because of the nature of this particular investigation, identity of the victim will take a little bit of extra time,’’ Adams said. “The remains we have at this point cannot be positively identified at this time.’’