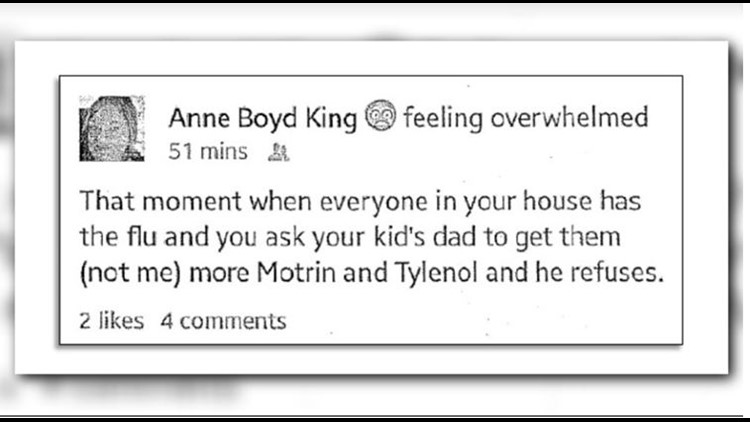 TENNILLE, Ga. — A Washington County woman who was arrested after criticizing her ex-husband -- a county deputy -- on Facebook will receive a $100,000 settlement.

But Anne King's lawyer says the most important part of the settlement is the apology from the two deputies involved.

"If an officer can arrest you because he doesn't like what you posted on Facebook, then we don't have the First Amendment protection that the Supreme Court afforded us,' said Atlanta attorney Cynthia Counts. "Can you imagine how many people would be in jail now?"

King filed her lawsuit against deputies Corey King and Trey Burgamy in 2017.

She claimed that in January 2015, she asked King, her ex-husband, to pick up medicine for their sick child.

He refused, she said, claiming he was too busy.

According to her lawsuit, Anne King wrote that she was "feeling overwhelmed."

She wrote, "That moment when everyone in your house has the flu and you ask your kid's dad to get them (not me) more Motrin and Tylenol and he refuses."

According to her lawsuit, Corey King took out a criminal complaint against her for "criminal defamation."

She writes that the magistrate ruled that she had defamed King and ordered her jailed -- after threatening to ban her from Facebook.

Anne King was in a jail cell for four hours and released on $1,000 bond, according to her lawsuit.

A state court judge later threw out the charge, saying, "I don't even know why we're here," according to her lawsuit.

Last year, federal Judge Marc Treadwell wrote that county magistrate Ralph Todd issued a warrant for Anne King, for "criminal defamation." But that's not a criminal charge in Georgia, Treadwell wrote -- and hasn't been since 1982.

Treadwell called the arrest "patently absurd and unconstitutional" and said her lawsuit could go forward. Corey King and Burgamy appealed that ruling to federal appeals court.

But now federal court documents online show that the lawsuit was dropped Oct. 16 due to a settlement.

Counts confirmed that the settlement included both the $100,000 payment from King and Burgamy and the apology.

Anne King posted a copy of the settlement to her Facebook.

It shows that Corey King and Burgamy wrote, "It was not our intention for this to become as big of an issue as it became. We apologize for the pain caused and time wasted including Ms. King being charged and arrested with respect to what was really a personal dispute that should have ended without involvement of the courts."

Counts says her client "was so relieved, she was very tough. She could have settled this a long time ago. But she was very firm on the $100,000 amount. We really wanted this to be a message."

She added, "But I think she's been pretty clear that the apology was more important."

We reached out to the officer's deputy, Taylor Hensel. He has not returned our phone call.

WHAT OTHER PEOPLE ARE READING

An intervening car saved the lives of 2 people nearly hit by a red light runner. It was all caught on video.

STAY ALERT | Download our FREE app now to receive breaking news and weather alerts. You can find the app on the Apple Store and Google Play.

STAY UPDATED | Click here to subscribe to our Midday Minute newsletter and receive the latest headlines and information in your inbox every day.

Have a news tip? Email news@13wmaz.com, or visit our Facebook page.