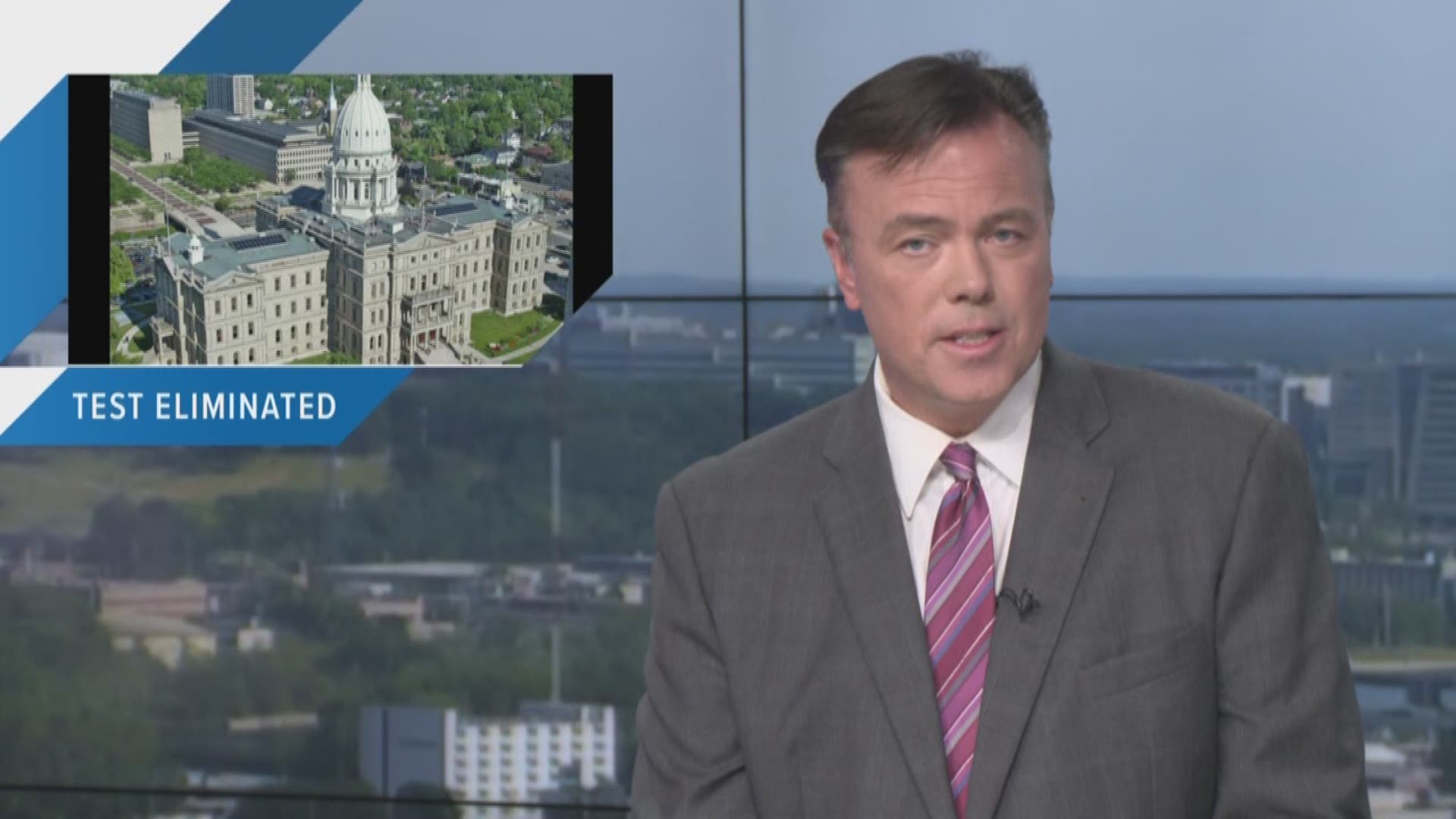 Prospective Michigan teachers won't have to take the SAT anymore to be certified in Michigan, a move that might help attract more teachers to the profession and help districts struggling with classroom vacancies.

The SAT has been the basic skills exam teachers have had to take since last year, but Gov. Rick Snyder signed legislation last week eliminating the Michigan law that requires a basic skills exam in the first place.

"The basic skills test ... is not a strong indicator of how successful a teacher will be," said Sen. Marty Knollenberg, R-Troy, who sponsored the legislation, which passed the Michigan Legislature earlier this month. The law received widespread bipartisan support when it was before lawmakers, and goes into effect Sept. 25.

Knollenberg, the vice chair of the Senate Education Committee, said the panel has heard repeatedly about how difficult it is to get people to enter the teaching profession.

The basic skills examination was one of two testing requirements teachers had to meet in order to teach in Michigan and was generally taken before entry into a teacher preparation program. What remains is a requirement that teachers pass a test in the subject matter they're planning to teach, taken at the end of a teacher prep program.

Kate Walsh, president of the Washington, D.C.-based National Council on Teacher Quality, criticized the decision Friday. She said she doesn't have a problem with eliminating the SAT since it's not a basic skills exam.

But, "you do need to assess if candidates have basic skills. Can they read and write and are they mathematically literate? There should be some entry standard that’s objective," Walsh said.

"It allows programs to admit people who are wholly unqualified, and who will never be able to pass the subject matter exams."

The SAT requirement has been a frustration for Jeannette Washington, a Detroit native who received a bachelor's degree and a master's degree in education in Mississippi, where she was a certified educator until returning to Michigan in 2016.

The SAT, she said, is an unnecessary hoop to have to jump through for someone who has already demonstrated competency in another state.

"I feel like I’ve been testing all of my life to get here. It’s almost like it’s counterproductive," said Washington, who graduated from Cody High School in 2006.

The Michigan Department of Education, which issues teaching certificates, supported the bill "because there is no research that indicates a passing score on a test of basic skills leads to more effective teaching," said Bill DiSessa, spokesman for the department.

"Additionally, the test is proving to be a barrier to individuals who, with appropriate support and remediation, have the potential to become excellent teachers," DiSessa said.

Jennifer Lewis, associate professor of math education and teacher education at Wayne State University, said the exam has kept some strong teaching candidates out of the profession. At Wayne State, many of the prospective teachers are older and have been out of high school for years. Many were previously stay-at-home moms or are changing careers. And many needed to take a preparation class before taking the test — an expensive hurdle.

Many Michigan school districts have struggled in recent years to hire teachers, particularly in shortage areas such as special education, foreign language, math and science. That's happening as teacher preparation programs experience enrollment declines. From 1996 to 2016, the number of initial teacher certificates issued in Michigan dropped from 6,077 to 3,696.

Shortages are hitting hard in districts such as the Detroit Public Schools Community District, which currently has about 200 teaching vacancies, a quarter of them in special education.

The district has aggressively recruited, holding a number of job fairs in the city — including one Wednesday for art and music teachers — and traveling out of state to job fairs. The district has stood firm on its commitment to hire only certified teachers.

"In the current environment ‎where fewer undergraduates are entering the teaching profession, any barriers removed preventing a certified teacher from being eligible to hire is appreciated," Superintendent Nikolai Vitti said. That's especially the case when it benefits teachers who were trained in other states, Vitti said.

The MDE began using the SAT as the basic skills exam in 2017. Among the reasons for making the switch from the Professional Readiness Examination: SAT's appeal as a national exam that assesses readiness for college and careers, said Leah Breen, director of educator excellence at the MDE.

Convenience was also a factor. The SAT is part of Michigan's high school exam, so a recent high school graduate wouldn't have to re-take the exam again if he or she is entering a teacher preparation program in college. That would also cut costs for students, since taking the test is free for Michigan high school students.

Breen, in an email, said the exam was difficult "for prospective teachers changing careers from a trades field." She also noted that "pass rates for most exams are lower for students from low-income backgrounds, English language learners and others who we are specifically trying to recruit into the profession."

That latter reason is part of why there's been "a real movement afoot to do away with these tests," Walsh said.

According to her organization, Michigan is the only state that had required the SAT as the only basic skills examination for prospective teachers. In 16 other states, it is an option along with other exams. Four states don't require a basic skills exam at all.

Lewis agrees that prospective teachers need to be able to demonstrate basic knowledge on an exam before entry into a teacher preparation program. But the exams the state has used — which have changed multiple times in the last six years — have not been effective at measuring proficiency in teaching.

"The problem is those tests haven't been developed," Lewis said.

So how do you admit students into a program without knowing their basic skill abilities? Lewis said it's important to note that students will have had two years of general education classes in college before entry into the teacher prep program, which should provide some demonstration of their skill level.

And the early classes they take once in the teacher prep program "are consciously looking to weed out the people who aren't going to be successful," she said.

An example: Lewis said her classes are taught in local elementary schools. Her prospective teachers will learn about teaching things such as the distributive properties of math in one room, then when they're done they'll walk over to a fifth-grade class and teach lessons to the students there.

"That's a pretty powerful indicator of 'Do they know the mathematics?' Are they able to make it come alive and make it understood with children? That's the kind of content knowledge we want to see demonstrated by our candidates."

She is a bit worried, though, that eliminating the basic skills exam leaves the perception "that you don't have to be very smart or knowledgeable to be a teacher."

"What it does, for good and for bad, is it throws the responsibility of ascertaining teacher's knowledge back to the programs that prepare them," Lewis said. "That makes sense. I know my candidates deeply. I see them with children."

Washington moved back to Detroit in 2016 and began volunteering as a DPSCD ambassador, which required promoting the district at community events. This school year, she spent nearly six months in a long-term substitute teaching assignment at Marcus Garvey Academy. She said it's important for her to serve urban youths.

"I owe it to the teachers who were diligent in their efforts to support me ... It's all about giving back."