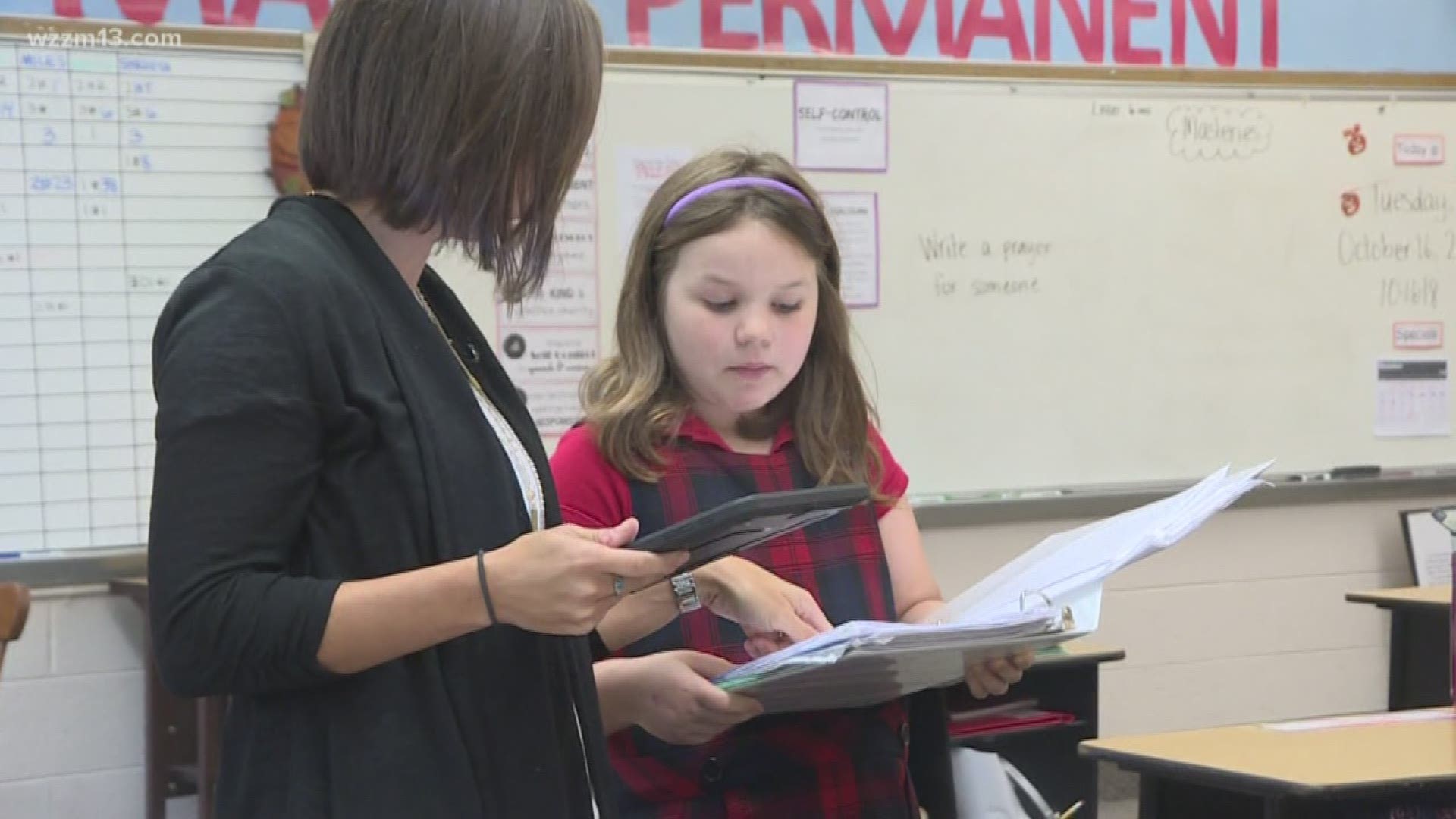 EAST GRAND RAPIDS, Mich. - It's a struggle for millions of parents. One in five U.S. children have some type of learning disability or attention deficit, according to the National Center for Education Statistics. Studies show, as students, those kids are at an increased risk of dropping out of school.

"What I have seen from a lot of parents is they just don't know where to go and they don't know how to help their child," said Kelli Walker, a certified Arrowsmith teacher at St. Stephen Catholic School in East Grand Rapids.

Walker has been an educator for nearly two decades and is in her second year of teaching the program. She describes it as transformative.

“So, the Arrowsmith program is brain enhancing program. We are strengthening parts of the brain for kids who have learning disabilities," explained Walker. "So, anything from reading and writing difficulties, dyslexia, dyscalculia anything to do with processing - so executive functioning difficulties, auditory processing and any kind of motor difficulty - so, we are helping those students who have just struggled down this path to be successful.

“We kind of describe it as holes in their bucket. We are filling those holes and making it so they are able to learn in an appropriate way.”

Arrowsmith is offered at more than 100 schools in nine different countries around the world. But, St. Stephen Catholic is one of only two, in the entire state of Michigan. Walker said parents have been so desperate for something like Arrowsmith, they're coming from all over to enroll their children.

"We have students who are driving from different areas of Michigan. We have students who have moved from the East Coast," she said. "We have parents who would come and rent places for the school year, stay here for the year and travel back and forth

“We have some someone who is staying here, right now, from Chicago and she is driving every single day here."

The program is tailored to each particular student. Walker said it begins with a thorough assessment and then students spend, on average, about two to four years mastering various exercises.

“Such as, a lot of students will come and have some difficulty with forming letters or numbers the right way or numbers. Some may not be able to see that's not a reversal. So, we have some exercises that will help tailor that," explained Walker. "One is called word and tracing. The student has to be able to trace very carefully inside some lines and that helps them concentrate, focus on the formation of the letter and symbol and also helps them with being able to do the tracking for the reading."

Kelli Walker is in her second year as a certified Arrowsmith Program teacher. The program is taught at St. Stephen Catholic School, one of only two locations in the state of Michigan.

"It is very challenging. They are having all of these struggles and the program is targeting those areas in the brain that are the hardest part for them. So, they are working very, very hard," said Walker. “The goal of the Arrowsmith program it to just build up these students so they are able to do these things in a regular classroom in the world by themselves, without any compensations or accommodations. Just being able to do it on their own - that is the ultimate goal.”

Walker has taught students from second grade all they up to adult learners. And says they celebrate very milestone and achievement.

“They haven't had that type of success and that feeling before. So, when they succeed, we just jump up and down. We are doing jumping jacks and shouting it is just very exciting,” said Walker. “We have some people who have graduated from this program who go on to Michigan, U of M. They are high on ranks at Catholic Central. It is pretty amazing. They are those students who are getting up in front of people with the confidence to speak in front of others without being scared. This program has made it possible. Parents are so happy with everything that has come out of this program. There has never been anyone who says it doesn't work.”

St. Stephen Catholic School has more information about its Arrowsmith program on the school’s website.