At least 100 police officers appeared to be on the scene in riot gear. Two armored police vehicles were spotted at the scene also. 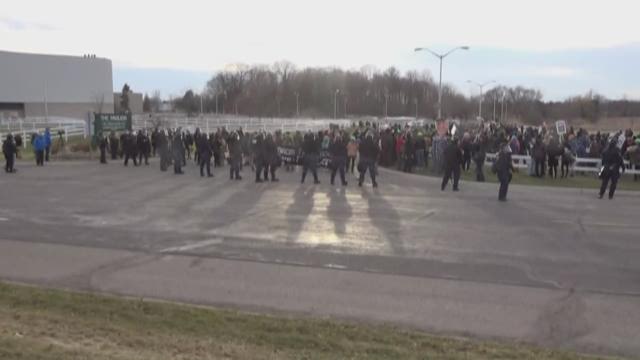 Multiple people were arrested and fights broke out ahead of white nationalist Richard Spencer's speech Monday at Michigan State University.

Hours before the speech , several hundred protesters — some wearing masks — marched toward the venue where the event was being held amid a heavy police presence.

Shortly after 4 p.m., fights and arrests broke out at the tense scene, as a small group of Spencer supporters showed up and protesters tried to drive them back. Bottles and rocks were thrown.

Amid the chaos, Spencer's speech was pushed back from 4:30 p.m. to 5 p.m. Then, just a few minutes before the new start time, protesters effectively sealed off the venue. A few Spencer supporters turned around instead of trying to get in.

Inside the auditorium, about two dozen or so people were in the audience five minutes before the start of the speech.

Spencer said during his speech that no other group, including Black Lives Matter and the Nation of Islam, gets the same hostility as the alt-right. He said whites are becoming the minority in the U.S.

Addressing the protests outside, he said: “If you aren't getting protested, you aren't doing anything that matters.”

The speech lasted about a half-hour before Spencer started taking questions from the audience.

Earlier, about 20 or so Spencer supporters tried to walk directly through the crowd to get to the Pavilion for Agriculture and Livestock Education. The two sides screamed obscenities at each other. Physical confrontations started; fists, elbows and feet were all used as people tumbled to the ground.

Police swarmed and pulled out several people. Arrests were made on both sides. Some went willingly, others were carried off by multiple police officers, spread-eagle down the road.

PHOTOS: Protests erupt at MSU ahead of Richard Spencer's speech

1 / 17
Ryan Garza, Detroit Free Press
Police escort a supporter in at the MSU Pavilion for Agriculture and Livestock Education on the Michigan State University campus in Lansing on Monday, March 5, 2018 where white nationalist Richard Spencer spoke to supporters.

At least 100 police officers appeared to be on the scene in riot gear. Two armored police vehicles were spotted at the scene also. Michigan State Police also arrived. Some officers are carrying tear gas guns.

Against the backdrop of drumming and chanting, one protester was asked about being arrested as she was led to a police van.

Police had blocked off the area close to the venue, the Pavilion for Agriculture and Livestock Education. MSU officials chose to rent out that particular venue — which is away from the main campus — to avoid just such an outbreak of fighting.

Earlier, Michael Treeman, 21, of Detroit, said he made the trip to East Lansing to protest.

Credit: Photo: Ryan Garza, Detroit Free Press
Law enforcement officers stand outside of the MSU Pavilion for Agriculture and Livestock Education on the Michigan State University campus in Lansing on Monday, March 5, 2018, where white supremacist Richard Spencer is to speak to supporters.

“There’s nothing Richard Spencer stands for that is good," he said. "He doesn’t deserve speaking time anywhere. We want to let him know there’s more people out here who hate what he stands for than who are going to be inside listening.”

Erica Mitchell, 29, of Grand Rapids, is an MSU alum who said it sickened her that her school was letting him on campus.

“He is full of hate — that’s all,” she said. “He’s against everyone who isn’t white. There shouldn’t be any place for that view anywhere in America, much less on a college campus. He’s not inclusive — he’s exclusive.”

Cameron Padgett, a student at Georgia State University, originally made the request to rent space from MSU.

When MSU received the request it initially set aside a room at the Union and was going to charge the group $2,000.

Credit:  Ryan Garza/Detroit Free Press
Protesters stand outside of the MSU Pavilion for Agriculture and Livestock Education on the Michigan State University campus in Lansing on Monday, March 5, 2018, as white supremacist Richard Spencer speaks to supporters.

Sixteen days later, Spencer’s request was made public and the response from MSU’s community was swift and overwhelming: Don’t let Spencer on campus.

A federal judge ordered the two sides into mediation. The two side reached an agreement then to let Spencer speak.

A space inside the pavilion is being rented by Spencer’s group, which describes itself on its website as a “central and indispensable component of the international Alt-Right." Alt-right generally refers to the modern white nationalist movement, which has an explicitly racist and antisemitic ideology and argues for the creation of a white state.

The meeting is ticketed, and Spencer controls who is allowed in, said MSU Police Lt. Doug Monette. The Detroit Free Press and many other local media organizations were denied tickets inside the event.

“The safety and security of our campus community remains our top priority,” Monette said.

Spencer is one of the most visible white nationalists in the United States. In 2013, he called for a "peaceful ethnic cleansing" at a conference hosted by a white nationalist publication, according to the Southern Poverty Law Center.

The organization calls Spencer “a suit-and-tie version of the white supremacists of old, a kind of professional racist in khakis," and one of America’s most successful white nationalist leaders.

Here are some of the live shots we took during and immediately after the protests: 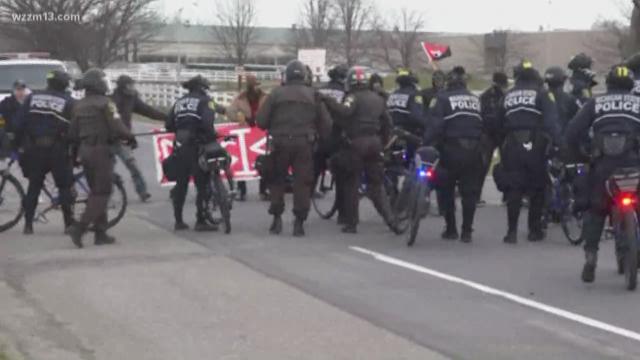 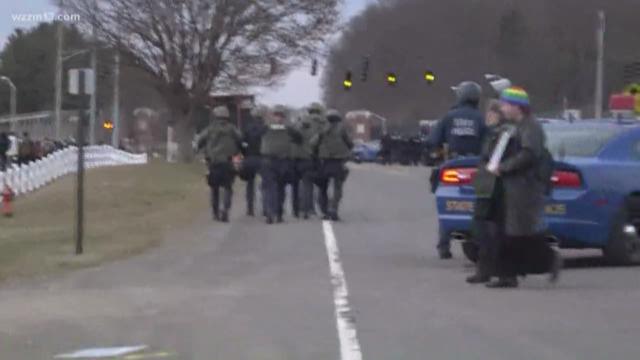