From road patrol to classrooms: A day in the life of a Kent County school resource officer

Their position has come under fire ever since the Parkland, Fla., shooting. Here in West Michigan, there are eight school resource officers who single handedly serve entire districts throughout Kent County. 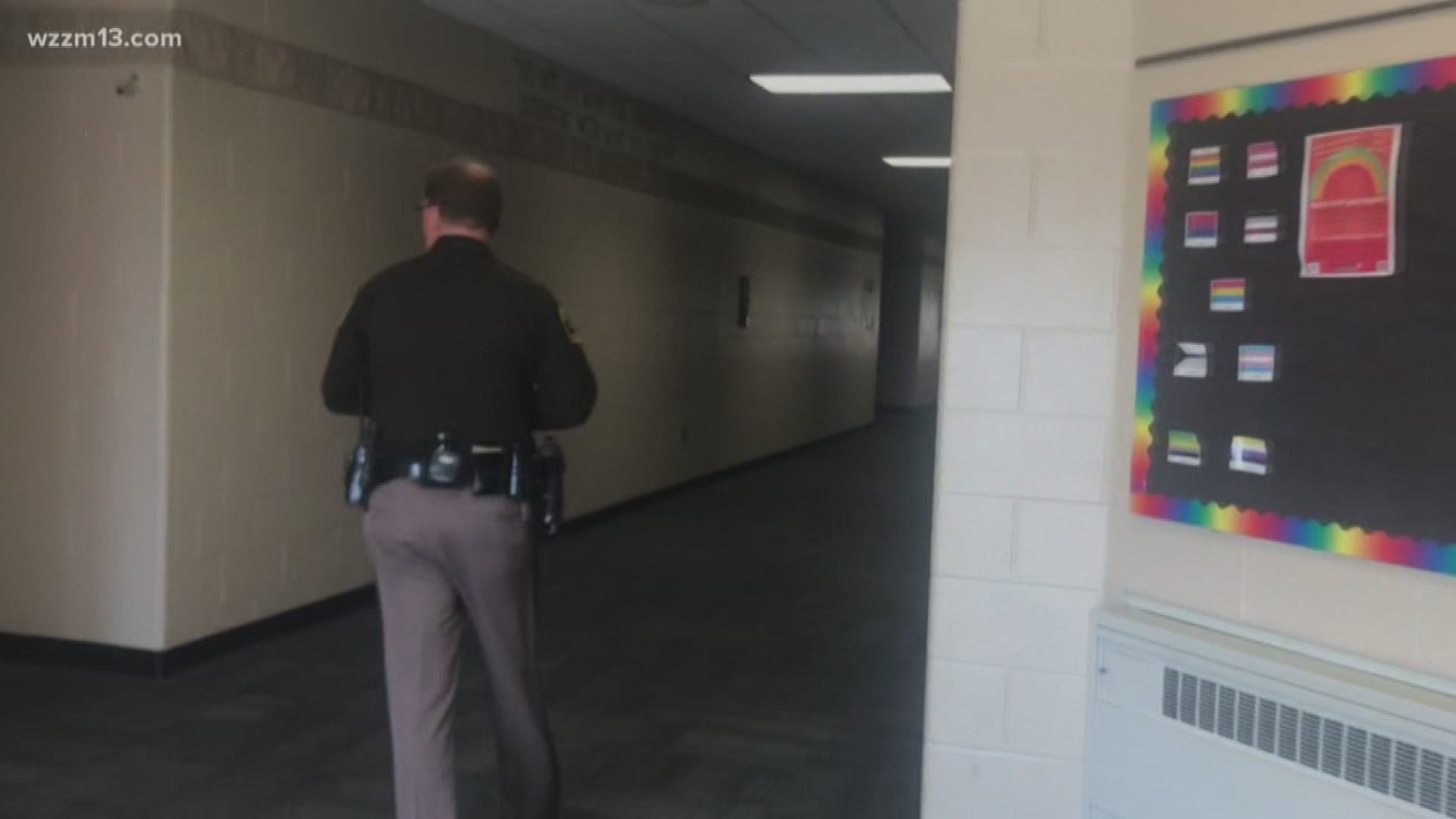 BYRON CENTER, Mich. — His patrol car is one of the first in the Byron Center High School parking lot every morning.

Jonkman is not the first resource officer to work for Byron Center Public Schools. When budgets tightened back in 2008, school resource officers (SRO) were one of the first positions to get cut. But Jonkman is the first officer out of the Kent County Sheriff's Department to serve the district.

The sheriff's department pays a third of the cost of the program, while the township and school district split the rest. Jonkman is stationed in the high school building, but he is responsible for grades K-12.

"I never wanted anything to do with it," said Jonkman, who served as a road patrol officer for years before becoming an SRO.

But four years ago, the Byron Center job opened up and it just started to make sense. Jonkman would be able to work daily with some of the kids he'd had to arrest while on road patrol in the area.

“When I work road patrol, I don’t get to spend a lot of time with the people I interact with...We go there deal with the issue and get out. Here, we get to talk to them and understand what they are going through. And help them not do that again if it was a legal issue, [and] really make a difference in their lives.”

Kids used to avoid him in the halls, now, they walk right into his office. His job is to protect them, and most days, he does that in more ways than one.

“These kids in the building are my responsibility to keep safe and stay safe. I will work on getting them help. I work with counselors, parents, Network 180, whoever we need to make sure that the student has a successful school career and that they get whatever help they may need," Jonkman said.

Whether it's buying lunches or giving a student a ride, Andy is almost always available to help.

"It’s way more involved because you care—not because you're obligated. The sheriff doesn't say we have to do this. He appreciates the fact that we do. But a lot of it is us, because we care. So, we go that extra step.”

Christy Wierenga is the director of student development at Byron Center High, she said the difference that Andy makes is invaluable.

"There are students who have been in some pretty significant legal trouble and still go to him for advice. They will get here Monday morning and say 'Where is Andy? I need to talk to him,'" Wierenga said.

I think that’s the part that is so cool. It’s not just a safety thing; it's making it so the students have this protected safe space."

Jonkman is always on call to respond to an issue at any of the district's campuses. Some days that’s easier to do than others.

“I cannot be everywhere at once," Jonkman said.

Since the Parkland, Fla., shooting, there has been even more of a focus on preparing teachers and staff for any situation.

In the course of a single work day, Jonkman conducted an active shooter training, zeroed in on a locker room thief and settled a student argument.

“Any police officer can't walk through the door and be a school resource officer. I think there has to be over and above a commitment to the community, students and families. Not everyone can do that, but Andy has done a fabulous job at making that connection," Wierenga said.

The connection was somewhat of a natural one for Jonkman. He lives in Byron Center, he used to do do patrol in the area and his kids go to school in the district.

He plans to go back to road patrol someday, but he promised his kids not until at least both of them graduate.

"I would not want my kids going to a school without one [SRO], so if it wasn't me here—I'd want someone else to be. Because I see the difference that it makes, now."