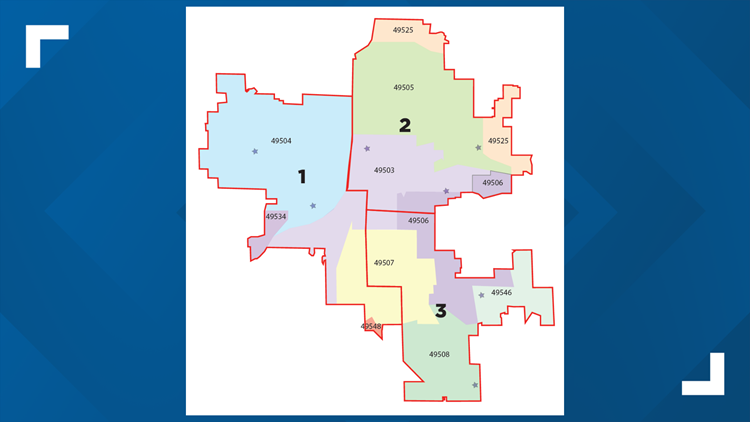 GRAND RAPIDS, Mich. — It's an idea they've talked about for the last year, set into motion just last week with the launch of their petition for signatures.

Grand Rapids Democracy Initiative, or GRDI, needs 7,500 signatures by August 7 to get their ward expansion measure on the November ballot.

The idea: redistrict Grand Rapids' three current wards into eight, with one commissioner for each ward. Their proposal also moves to allow voters to decide who will fill commissioner vacancies, which would be a shift from the current internal appointment system.

The ward system, as it stands now, was established back in 1916.

"It's just simply addressing the system of government that's 100 years old in a city that has doubled in size," said Don Lee, one of GRDI's 10 committee members.

"The number of doors that a candidate would be required to knock on, the amount of literature they'd have to send out and the expense related to that -- it just doesn't make it tenable for the average citizen to find their way to that seat," Lee said.

This is one iteration of the possible redistricting proposed by GRDI.
Don Lee/GRDI

"I am a firm believer in representation, so I understand in that perspective where the initiative is coming from," Jones said. "They are saying they are looking at it through an equity lens and I think that's fair. I also know that right now our city commission is the most equitable it's ever been in terms of race," Jones said.

The Grand Rapids City Commission is made up of three black commissioners, but there are no members of the Latinx community represented.

"Stories continue to be missing at the table, without equal representation people feel like they aren’t being heard or seen," said Eleanor Moreno, another GRDI committee member. "As the the city continues to grow it is past time to have more representation."

After discussing the proposal over the course of the last few months, city leaders decided to form an 11-person task force to delve further into the idea. The task force will also be exploring a second election initiative, which proposes moving city elections from odd years to even years to improve voter turnout. Jones said the task force is essential in determining where the community stands.

"You're talking about potentially changing something that's been at play in our city for decades; that's no small feat," Jones said. "Thus the importance of putting together a table of individuals from the community to really flesh it out and drill down deep to get a sense of both the positives and negatives."

The task force will include representatives from the two groups involved in the ballot initiatives, as well as, community members chosen by each of the city commissioners. The 11 members are set to be finalized by July 23, giving the group the next four months to analyze and make recommendations by Dec. 14. Lee said at this point they are waiting to see how the task force plays out, but ultimately, their goal is still to make it on the November ballot.

Lee said even if the proposal passed, the new ward system would not be put in place until 2023, to allow newly elected commissioners to serve their 4-year terms.

GRDI's proposal has been met by some opposition from the Grand Rapids Chamber of Commerce, who says altering the structure of city government is a 'risky experiment.'

"We also need to really drill down on the key question 'What problem are we trying to solve?' Grand Rapids has challenges like any city, but we have also been incredibly successful in many ways and have had the fortune of a collaborative Commission focused on economic and community growth," said the Chamber's senior director of government affairs, Joshua Lunger.