Gypsy Moth poses threat to oak trees: Here's how you can help

The City of Grand Rapids is asking for your help, to protect against a predator that’s recently been on the rise. You probably have the tools in your garage. 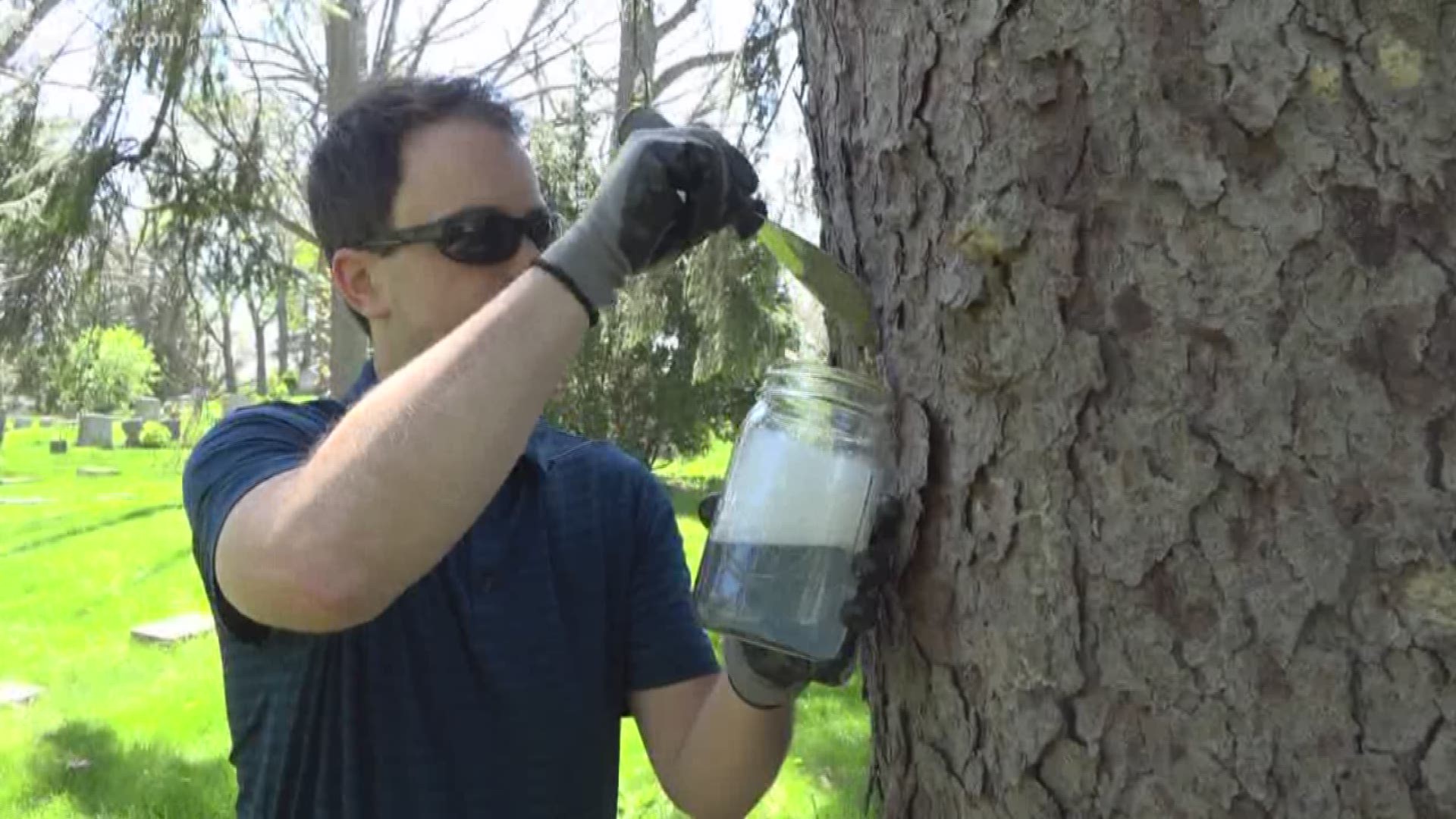 GRAND RAPIDS, Mich. — There's a goal in Grand Rapids to increase tree canopy to 40 percent citywide, but it's just as important to take care of the trees we already have.

That's why the city is asking for your help, to protect against a predator that's recently been on the rise.

The Gypsy Moth threatens trees all over Grand Rapids, and each egg sac attached to trunks and limbs can have thousands of larvae inside.

“The Gypsy Moth is an exotic, invasive moth, and the problem really isn’t the moth, it's the caterpillar," said Dan Coy, the City of Grand Rapids forester."It’ll climb up the trees and they’ll eat the leaves, and they go after primarily oak trees.”

The moths are not new to Michigan, but have become more of a menace in recent years.

“There's a bacteria, virus, a fungus that will go after them," Coy said. "But the previous two springs have been really bad for controlling the gypsy moth for their predators, so we’ve seen their population spring up quite a bit.”

“We've seen some mature trees get defoliated a couple years in a row," Coy said. "Which, even for an old oak tree, is very taxing and can lead to them dying.”

To prevent that, all you need is a scraper, container of soap and water mix, gloves and glasses.

“We're just going to hold the jar at the base of the egg sack and scrape it into there, you can also use a butter knife, plastic is preferred," Coy demonstrated. "That can get into the crevices pretty well, and then we're just going to scrape off as much as we can.”

You can do this fall through spring, just let them soak for 48 hours before disposing.

“Once we’ve scraped our trees we're going to put bands of duct tape around the trees," Coy said. "You want to start with your sticky side down, so it stays on the tree. The whole reason we're doing this is for when the Caterpillars climb back up the tree to feed on the leaves, we want to stop them.”

This step comes solely in the spring. Wrap a double band of duct-tape around trees, with the outer layer sticky side out. Keep these on your tree until late June early July.

“Those are the easiest steps for homeowners to take, there are trunk injections as an option, there are sprays that you can hire people to do," Coy said.

Starting in late May early June, Grand Rapids is going to do an aerial spray for the Gypsy Moth in the high density areas. This is the first time spraying has happened in the city for about a decade.

If you live near one of the highest density areas, keep an eye out for the notices coming out early next week.