He first felt sick last April, admitted to hospital in May, and a month later, woke up on a ventilator. Now, after rehab and therapy, he is still not back to work. 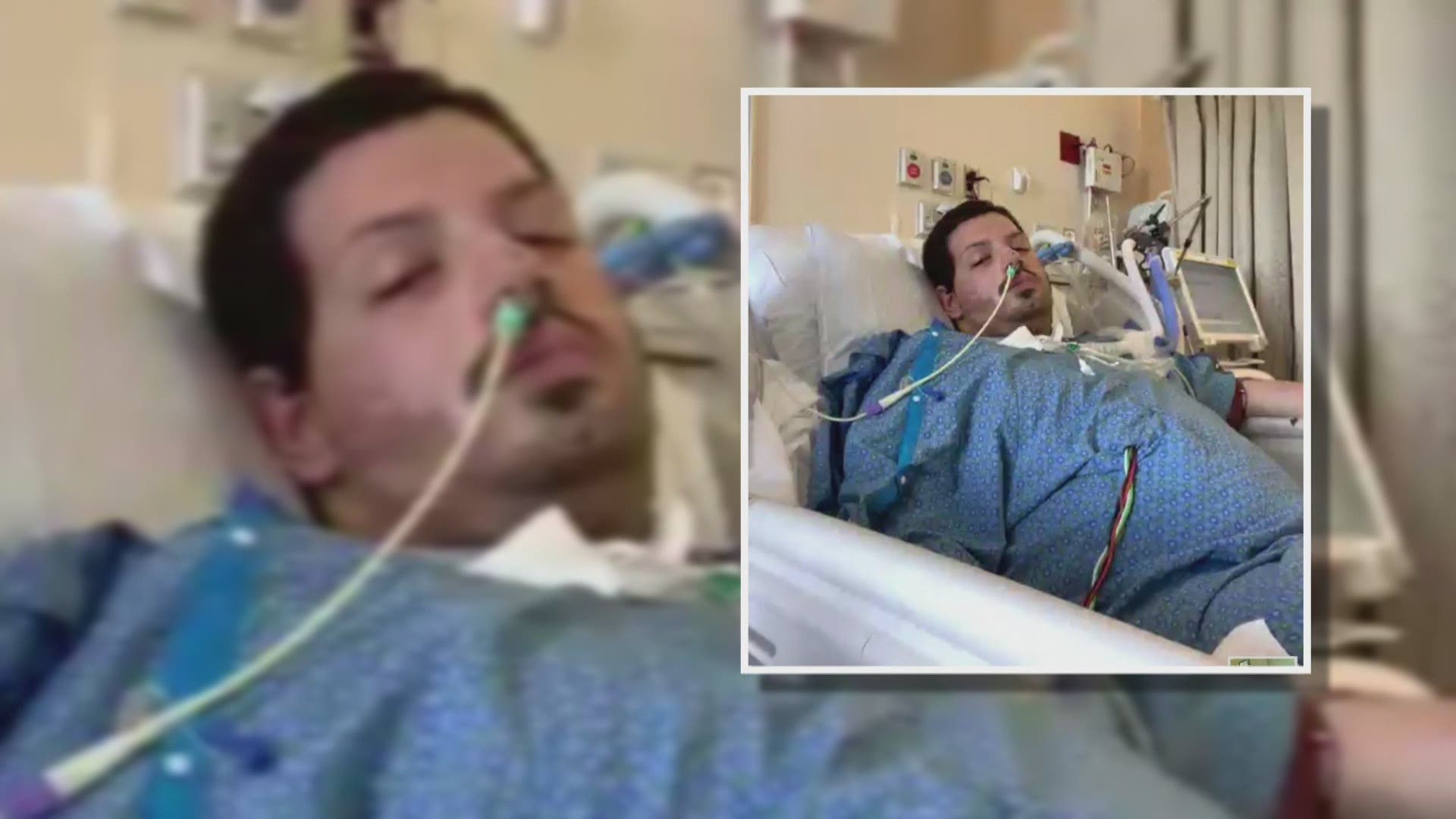 GRAND RAPIDS, Mich. — Angel Solis from Holland started to feel sick around the end of April, 2020. He had body aches, chills, and was fatigued.

He first went to a local Holland clinic, where he was told to go home and take Tylenol. A few days after that, he grew more fatigued and had trouble breathing. His mother had to take him to Holland Hospital, where he tested positive for COVID-19. He passed out a few hours after being admitted, the last thing he remembers for the next month.

Then, the 31-year-old began a months long battle for his life and strength.

Solis woke up on June third, a month after he was admitted to the hospital. During that time, he had been intubated, lost 30 pounds, put in an induced coma, and transferred to another hospital in Ann Arbor.

Credit: Angel Solis
Since they could not visit due to COVID protocols, Angel's family video chatted with him while in Ann Arbor.

"There was a nurse in there," said Solis, "I didn’t have a voice, and I couldn’t move. So, I made whatever little noise I could. She turned around, and I had to mouth to her everything I was trying to say. I asked her something like, 'How long have I been out?' And she said I’d been out a month or more."

While he was out, his older sister, Joanna Calderon, tried to keep the faith her brother would return to them.

"There was days that were really hard," said Calderon, "because they were honest with me, and said he had a really slim chance of living. His lungs were really bad they weren’t sure what else they could do."

His lungs filled with fluid, and he had many blood clots from being in the hospital bed. Eventually, Solis lost part of his index finger due to the clots.

"I still had a lot of questions in my head," said Solis, "Like, how long is this going to last? Will I ever be able to work again? Or even let alone play with my nephews and niece, or something like that. I was really scared I would never recover."

Solis had to relearn how to talk, walk, swallow liquid, and eat food. Slowly, he was improving, and able to take a few steps, but he needed oxygen if he went too far.

Credit: 13 OYS
Solis lost part of his index finger due to blood clots while in the hospital.

Then, Solis was transferred to Mary Free Bed Rehabilitation Hospital in Grand Rapids after a month in Ann Arbor. He spent a couple weeks there, regaining his strength.

"Even just standing too long, I would start to shake and get tired," said Solis, "At one point, in the shower, I even had to have a chair, because I couldn’t stand to take a shower. Even having conversations, I couldn’t have long ones because I would get really tired and gassed out, and I had trouble to breath."

Now, ten months after his first symptoms, Solis is still fighting to regain his strength and endurance. He has not been able to return to his physically demanding job, making pickup truck parts in a factory.

"He always talks about wanting to go back to work already," said Calderon, "He’s bored here at home. He wants to go back, but he knows he can’t do it still."

At home, he works on his strength by walking with increased weights, though he still can't go too far or too long. He also enjoys playing with his niece and nephew once again.

Credit: 13 OYS
Solis has weights in his garage, where he carries them and walks a few yards back and forth to build strength and endurance.

His doctor at Mary Free Bed, Dr. Ralph Wang, said long-term effects from COVID-19 are rare, about 5 to 10 percent, but can be severe.

"It’s been almost a year, 11 months now, and he’s not able to get back to his normal strength," said Wang, "He may have had some permanent nerve or muscle damage, unfortunately,"

Wang said he sees three categories of long-term effects: pulmonary, cardiovascular, and neurological. The most common is lung damage, and patients being fatigued and having trouble breathing months after diagnosis. He also sees increased heart rates, and what he says patients call "brain fog."

"I see the most severe cases in the whole state of Michigan, so that’s the sort of grain of salt," said Wang, "But I see patients with severe seizures, and they never fully get over it, or permanent brain damage."

"We do see with some of the most severe cases, it’s kind of like PTSD," said Wang, "where they’ve been isolated for 20 plus days, life threatening disease, and it's hard for some people to get over that, understandably."

Thankfully, Wang said these long-term effects are rare, and for the most part mild. However, some can be severe.

Credit: 13 OYS
Dr. Wang says long-term effects of COVID-19 is rare, and usually mild. However, in some cases, it can be severe with lung damage, heart rate changes, and depression.

For Solis, he said he has experienced some depression, especially due to not being able to return to work.

"If I lift anything too heavy, my heart rate goes pretty high and I run out of breath pretty quick," said Solis, "They say that's normal, and it will probably take some time because my lungs took a pretty big hit. There are days I do get mad because I just want to go out and play basketball, and play with my nephews and stuff. But, I can't. My strength is very weak."

Calderon and Solis both said they did not take the virus as seriously as they could have prior to Solis becoming sick. Now, they hope other people realize even younger people, like 31-year-old Solis, can have life-changing reactions.

"It hit our family, and he being younger than me and in good health, hardly ever got sick," said Calderon, "Some people may not get as bad as he did, but you just don’t know."

Once he regains some more strength, and restrictions ease, Solis hopes to travel more with his family, maybe even go to the Grand Canyon. He also said his faith, in addition to his family, kept him going in some dark times. He plans to go to church more when it is safe to do so.

"For the people who don’t believe it, they can see from me it’s real," said Solis, "You shouldn’t take this lightly at all. It could be your mom, your dad, nieces or nephews, or own kids going through something like this. By then, it’ll be too late. Hopefully people will take it serious."

Credit: 13 OYS
Solis now plays games with his nephews whenever he can. They like Sequence and video games. Looking forward to seeing them once again was motivation for Solis while in the hospital.

Mary Free Bed also has short videos online for COVID-19 patients to recover at home. They are techniques and exercises taught in their outpatient ReCOVery Program.