The clinic has the capacity to vaccinate 40-50,000 people per day between first and second doses, according to its operators. 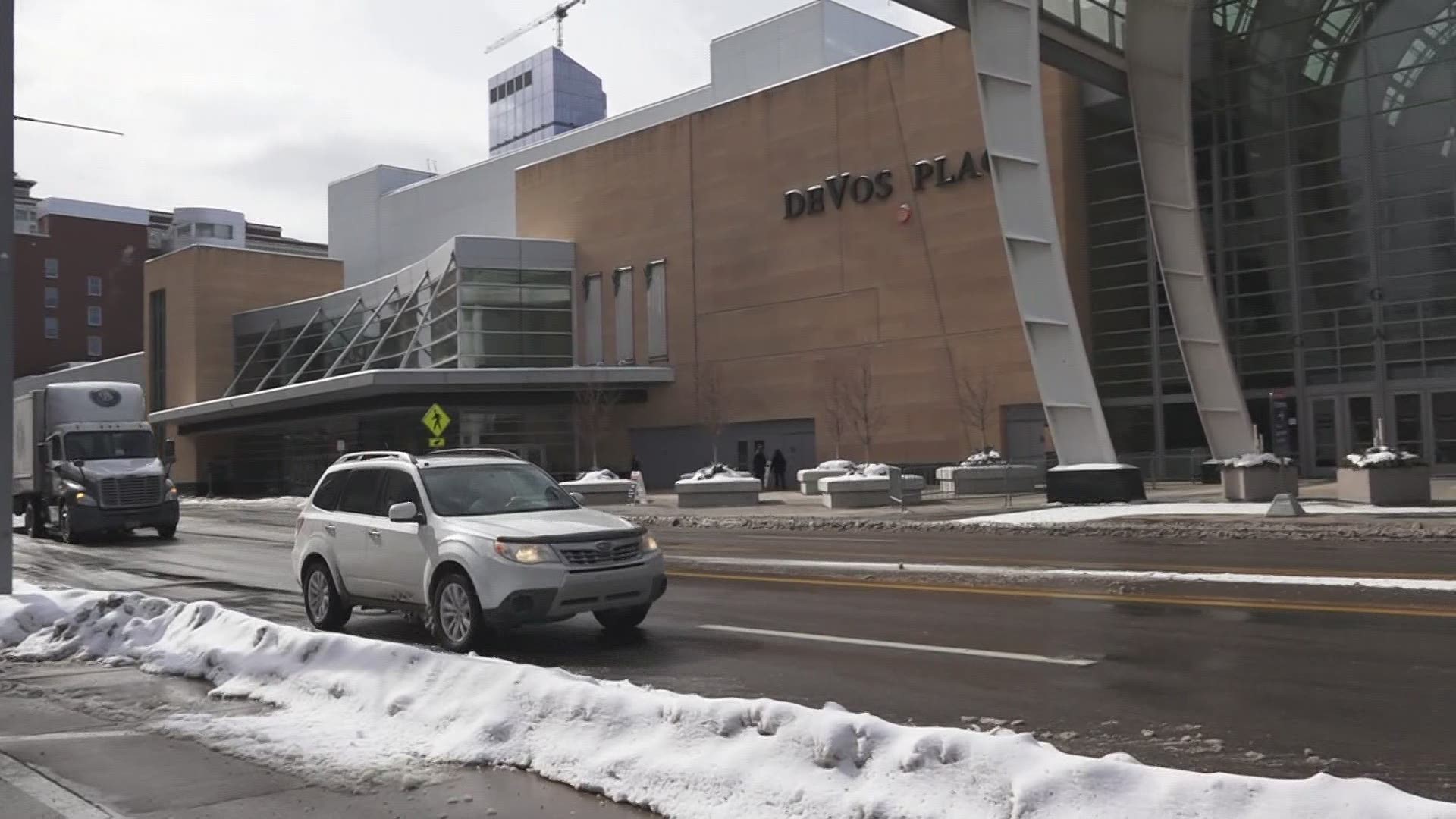 A large scale COVID-19 vaccine clinic in Grand Rapids is prepared to give shots to tens of thousands of people each day, but current supply is limiting that reality.

The clinic held at DeVos Place is the largest in the region and is situated in a county that's lost over 600 people to the virus. State health officials have said the goal is to have one mass vaccination site per emergency preparedness region, but the state is not receiving enough vaccine to meet the demand.

The Kent County Health Department, Spectrum Health and Mercy Health Saint Mary's partnered to get the West Michigan Vaccine Clinic, which has received criticism for its cost to operate, up and running by late January.

"So much of our life has been damaged by COVID-19 in the past year," said Dr. Adam London, director of KCHD, prior to a media tour of the vaccination site. "That's why it is so critically important for us to do big things, everything in our power possible to end this pandemic."

In the three weeks since it opened, 13,000 people have received the vaccine there, but clinic operators say it could be vaccinating up to 50,000 people a day (between first and second doses). Last week, there was no available supply at all.

"It's very frustrating when we have a week like last week where we had no vaccines to give and so we were closed," said Mark VanDyke of Spectrum Health, who has been running the clinic's day-to-day operations.

Both the county and the two hospital systems continue with other, smaller-scale vaccination efforts, and split their allocations to fulfill the downtown Grand Rapids clinic.

Every Friday, when the three partners learn of their dose allotment for the next week they coordinate to make ends meet. But, the hope is that the state will soon allocate vaccines specifically for the clinic.

"We know that [the state] would like to supply more vaccine here, but they're also struggling," London said. "They just need more of it."

Over 28,000 currently eligible people are on the COVID-19 vaccine waitlist managed by Spectrum Health.

There are a total of 11,000 appointments scheduled for this week for both first and second doses, officials said.

VanDyke said the hospital's ethics committee has set a framework that pulls people from each of the currently eligible groups to "make sure there's an even spread," he said.

The clinic is currently equipped with 40 vaccination sites and staffed with about 100 people, some of which are community members who volunteered. The National Guard is also on site to help.

But, the two other exhibit halls sit empty prepared to be turned into vaccination hubs, as well, once supply allows, said Spectrum Health Chief Operating Officer Brian Brasser, who guided the tour.

Brasser and London said DeVos Place was chosen especially for its size and its ventilation and air filtration that London said is "unmatched."

"The capacity here to move people through and to serve people quickly is so important and we thought from the very beginning that it would be a shame if our community received vaccine, and it sat in our freezers any longer than absolutely necessary," London said before the tour.

The clinic drew criticism from county commissioners and community members for its original cost of $12,000/per day. Last week, the county announced it had re-negotiated with the Convention/Arena Authority (CAA) to pay only operational costs.

But, even on days that the clinic is not running, the county will still incur costs. The building will cost approximately $3,000/per day on non-clinic days, said Kent County spokesperson Lori Latham. Those expenses include things like IT infrastructure and electricity for freezers.

The cost for the building on clinic days was not provided. The county has said Coronavirus Aid, Relief, and Economic Security Act dollars from the federal government will cover the costs made to SMG/ASM Global, the private company that manages the building.

During Monday's clinic, the first of four scheduled this week, over 700 people were vaccinated an hour, a third of the clinic's capacity. On average, it takes about 10 minutes from the time a patient enters the hall for their appointment to to the time they've finished getting the shot. Patients are then directed to an 'observation area' for 15 to 30 minutes to monitor reactions to the vaccine.

Among the lessons learned since opening the clinic, VanDyke said, was to have more tissues on hand.

"People have been at home and they've been grieving for 10-11 months now, and some more severe than others," VanDyke said. "But, this is an opportunity for hope and joy and to share a story. Our team members and our patients have just shown so much emotion and so much hope coming through here."

To register, visit wmvaccineclinic.org or call 833-755-0696 from 8 a.m. to 8 p.m. seven days a week. In most cases, patients are experiencing several weeks long wait times.

The West Michigan Vaccine Clinic previously put a call out for volunteers, however, over 3,000 people responded within about a day of the posting and filled all necessary slots. Click here for updates.

1 / 6
13 ON YOUR SIDE
A sign in the 'observation area' of the West Michigan Vaccine Clinic at Devos Place in Grand Rapids. The clinic has the capacity to vaccinate tens of thousands of people per day, but current COVID-19 vaccine supply has limited its ability to do so.