The governor hoped to move the state into Phase 5 by the Fourth of July, but on Tuesday, she said that won't happen. 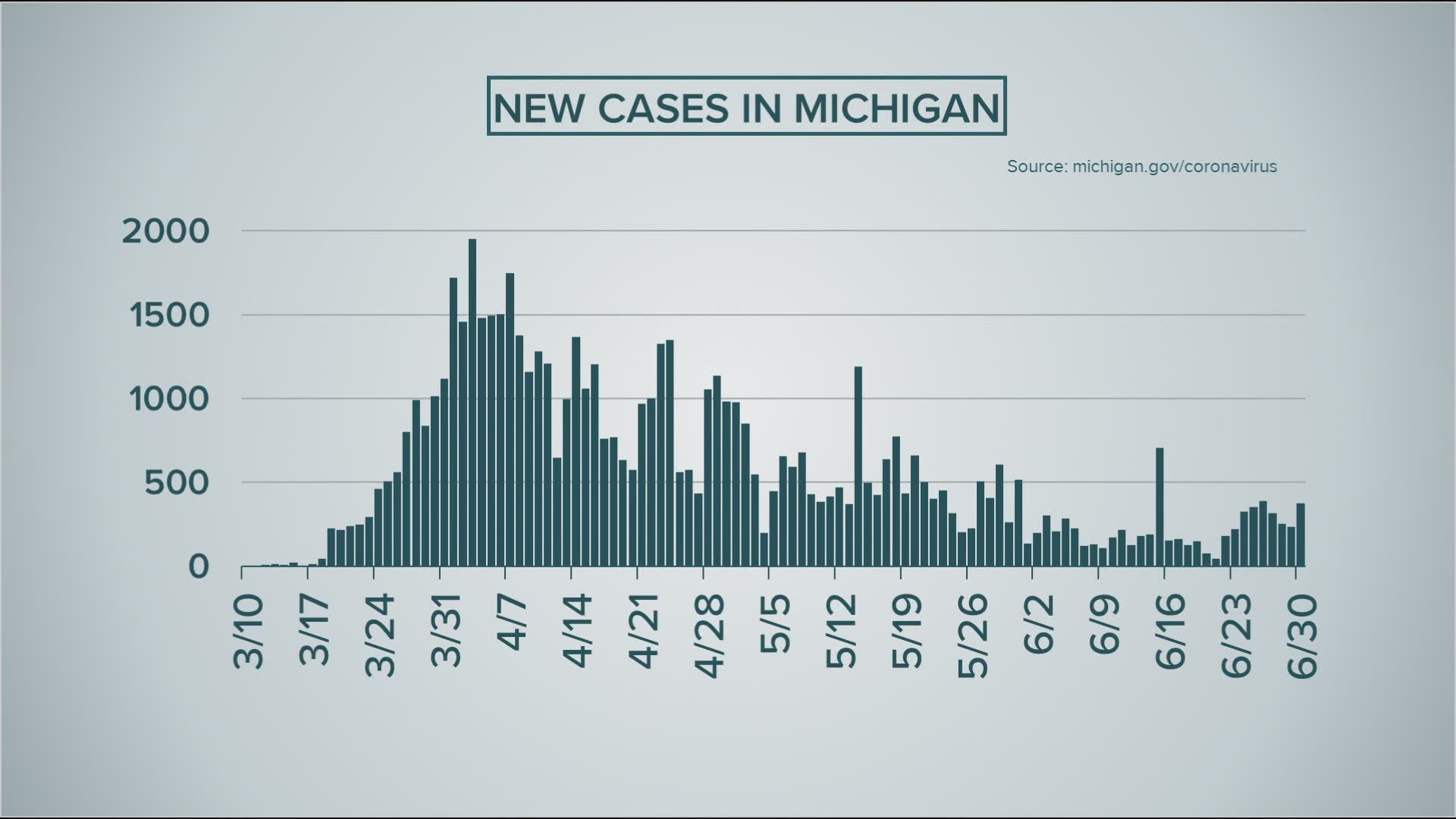 LANSING, Mich. — The Grand Rapids and Lansing regions were moved into higher risk phases for COVID-19 on the state's MI Safe Start Map as cases per capita have increased in recent weeks. But, these risk categories do not mean the regions are moving back to a more restricted economic phase.

After several weeks of declining cases, state leaders say every region of the state is now seeing an increase of cases. However, Dr. Joneigh Khaldun, the state's chief medical executive, said the rise in cases varies by region.

"This is concerning," said Khaldun.

Khaldun said other areas, like Kalamazoo and Detroit are also seeing rises but they are still in the medium risk phase. They remain under 20 cases per million a day.

She notes the percent of positive tests in these regions remains below 5%, but it is still increasing.

She and the governor also mentioned an outbreak at Harper's Restaurant and Brewpub in East Lansing. The Lansing State Journal reports 107 cases are linked to Harper's. In Grand Rapids, several bars and restaurants have had to close temporarily after employees tested positive for the virus.

"There's also evidence, however, that there is likely community spread going on in some areas of the state," said Khaldun.

Gov. Gretchen Whitmer noted during Tuesday's press briefing that there is a spike in cases among the 20-29 year old demographic just in the month of June.

Despite the increased risk for some regions and rising numbers of cases across the state, Whitmer said she was not announcing any changes to the state's reopening plan. Most of the Lower Peninsula remains in Phase 4, which is when bars and restaurants can be open for dine-in services and retail can operate normally.

"My hope was that we would be in Phase 5 by the Fourth of July. That's not going to happen," Whitmer said. Phase 5 is when gyms are allowed to reopen and gatherings can increase in size.

"Does it mean that we have to rethink and reanalyze and perhaps take a more conservative approach? Maybe. But I'm not announcing that today," Whitmer said, noting the state will continue to monitor the data and keep an eye on rising cases.

The governor said she plans to provide more clarity on the next steps in the next couple of days as Michigan heads into the holiday weekend.

"If we see a sustained spike, that's precisely what would bring us back to Phase 3," she said. "It's not something I'm announcing. It's not necessarily a conversation that we're having right now. But I've always said, we're going to stay nimble. This is a dial. If we're safe, we'll dial it up. If we see risk, we're gonna dial it back."

Tuesday, Michigan reported 373 new cases of COVID-19, and the death toll increased by 32--the highest daily death rate since the beginning of June.

"We cannot play fast and loose with the rules. I'm hopeful that this weekend Michiganders will choose to celebrate the Fourth of July safely," Whitmer said, while encouraging Michiganders once more to mask up before leaving the house.

Watch live: Gov. Gretchen Whitmer is giving an update at 3 p.m. on the state's response to COVID-19. The governor is also expected to release her back to school plan today.