Struggle continues for restaurants, bars as executive order extends closure through May

"I've been on the phone seemingly all day, with members of this association, who are frustrated and they're filled with anxiety." 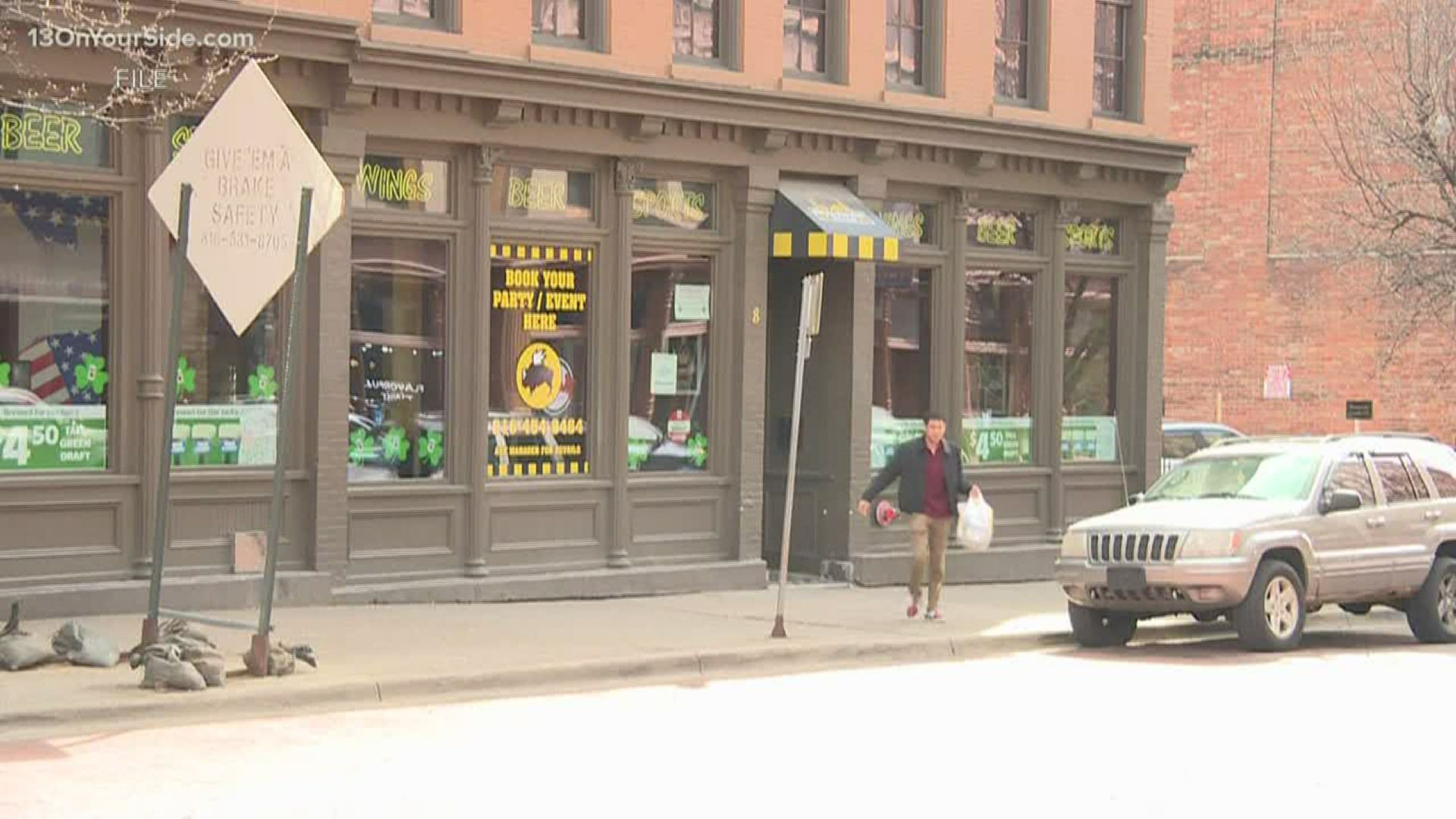 GRAND RAPIDS, Michigan — All four Big E's Sports Grill locations were shutdown last week—but it's just temporary, which isn't the case for some.

"Twenty restaurants a day are closing in Michigan and not reopening. And I don't mean not reopening until this passes, I mean closing for good," said Justin Winslow, president and CEO of the Michigan Restaurant and Lodging Association. "That is a rate that is unsustainable. So, we need to find a solution."

That statistic comes from the results of a National Restaurant Association survey that found 2% of Michigan business owners had permanently shut down their restaurant amid COVID-19. Fifty-three percent of restaurateurs reported a temporary closure. On Thursday, the governor extended the ban on dining in at bars and restaurants for 28 more days. Restaurants and bars have been shutdown since March 16.

The order was one of the first Gov. Gretchen Whitmer issued Thursday night after extending the state of emergency to May 28. The republican-led House chose not to extend the emergency declaration on Thursday, and GOP lawmakers have said the governor's actions now are unlawful. Republican legislators say the governor cannot extend the declaration without their approval according to a 1976 law, but the governor says she has the authority under a 1945 law.

"It's unfortunate that our state leaders are not able to collaborate better together on this," said Andy Johnston, vice president of government affairs at the Grand Rapids Chamber.

Johnston says the chamber drafted a plan for reopening the economy several weeks ago that called for gradual re-engagement based on geography and risk level. He said they've been happy to see this approach taken so far, but he is hopeful that lawmakers and the governor can eliminate the back and forth.

"I really do believe there's a lot of common ground that can be had, especially as we start to see more of what the governor is laying out," Johnston said.

Johnston said the he expects to see additional industries reopen between May 7 and May 15, with construction and real estate being the first.

"We will probably see another chunk of industries reopen with guidance beforehand. And I think what I'm seeing is that we'll see some guidance before May 28 about what limited openings could like for bars and restaurants," Johnston said.

Johnston says that this all contingent on the public health situation. Whitmer said in her announcement of the continued closure of places like bars, restaurants and casinos that Michigan is, "not out of the woods yet."

On Friday, the state reported a total of 42,356 coronavirus cases and 3,866 deaths, and 977 of those cases were newly reported. The governor has said repeatedly that the re-opening of the economy will be gradual in order to avoid a second wave.

Under the recent executive order, businesses can still offer food and drinks via takeout and delivery. Something that Winslow, of the restaurant association, says is not sustainable for many.

"While some are succeeding well enough to keep their doors open and some of their employees on the payroll. It's not a solution long term by itself," he said.

"It was just one of those things for the betterment of the business we decided that we would probably shut down operations and be able to reopen stronger and make sure everybody was safe and healthy," he said.

Big E's is part of Suburban Inns, a hotel management company, which runs hotels and restaurants around West Michigan. The company overall has furloughed over 700 people throughout the pandemic. Nearly 90% of restaurants have had to furlough workers, according to the restaurant association survey.

"It's tough, it's tough. I think everybody's scared, but at the same time you know we're poised to make a comeback," Webb said.

A comeback that hinges on concrete plans from Lansing about what's expected.

Webb says they would need lead time to be able to adhere to the guidelines and account for delays in the supply chain. Winslow says that's the case for most. He says May 28 may not be far off from when many restaurants would be ready to open back up again, but they need the guidelines now.

"They need to know that there's some clear hope and clear guidance that they can open up," Winslow said.