'I was humiliated': Mother shares warning after lip augmentation nightmare

Tancy Nelson, 40, received a lip augmentation last year and learned she should have done her homework before the medical procedure. 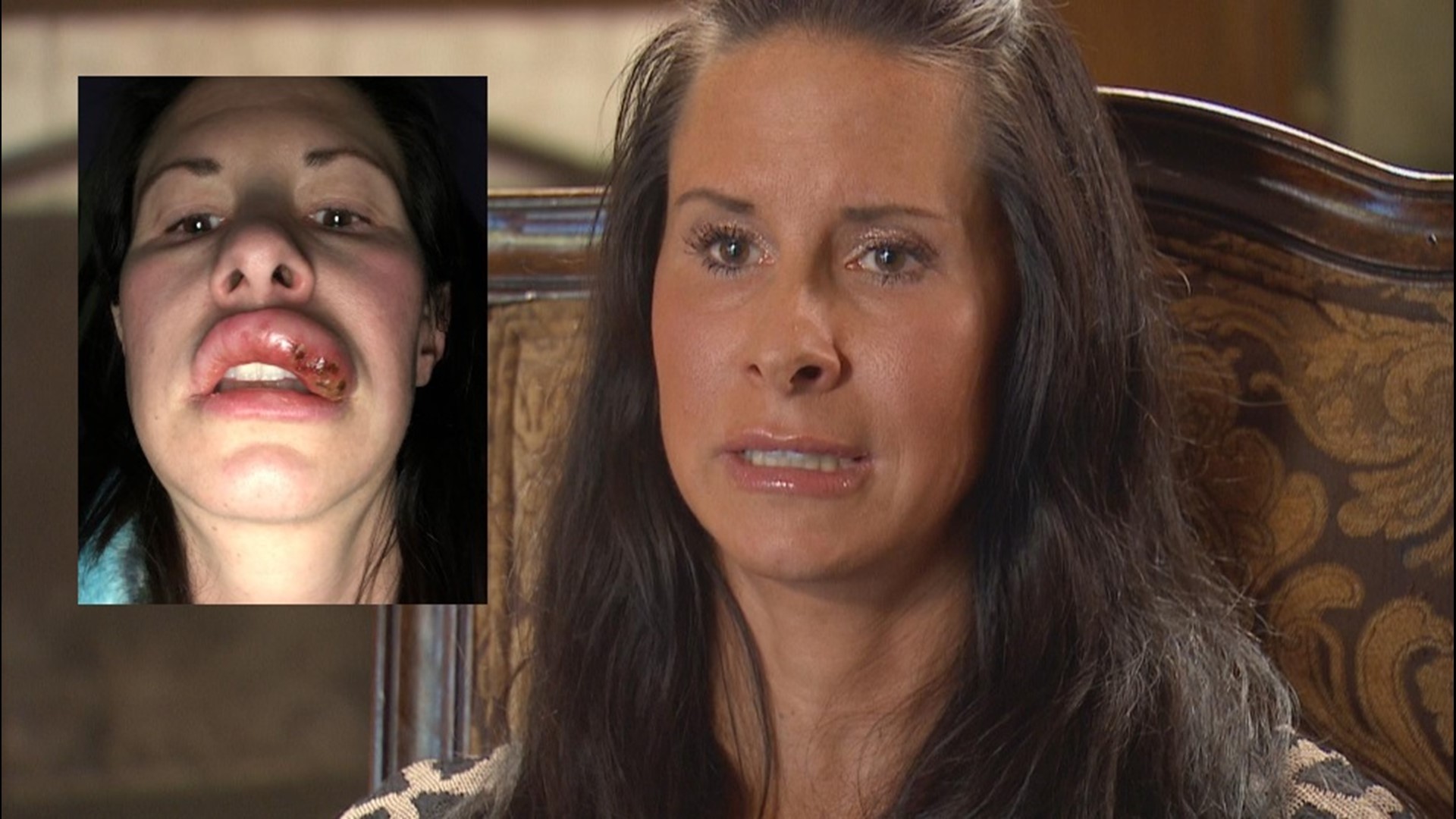 FORT WORTH, Texas — Shocking photos, a reconstructed face and a cautionary tale is all a Dallas woman got after she went into a Fort Worth tanning salon for a lip augmentation last year, court records show.

Tancy Nelson, 40, is now sharing her horrifying experience with WFAA in hopes that it prevents another person from going through the same thing.

"I couldn't look into the mirror for a good four months," Nelson said. "It was so much pain, I was humiliated, and I felt frustrated."

In April, Nelson filed a lawsuit against a Fort Worth nurse seeking more than $200,000 in damages after her lip procedure seemingly went haywire.

Credit: Tancy Nelson
Tancy Nelson takes a picture of her infected lip after getting it injected with filler.

According to the suit, Nelson attended what she called a "Botox party" at the salon in December of 2018.

Nelson admitted that it all seemed uncouth, but she was encouraged by a friend that everything would be all right.

"When it was a friend, I trusted it," Nelson said. "Big mistake."

Per the suit, Nelson's lips were injected with filler by the nurse. The suit also claims that within 24 hours, her lips started to swell.

When Nelson asked the nurse what to do, the suit said that the nurse never urged her to get medical treatment.

Nelson told WFAA that she eventually sought medical treatment after an infection took over her lip. She said that she spent six days in the hospital and more than $200,000 in medical bills to get her face back to normal.

A plastic surgeon had to drain her lip and reconstruct it, per Nelson. Thankfully, insurance covered a lot of it.

"I would say that $200,000 was the least of it," Nelson said. "One expense after the other was adding up just for me to get back to a normal life."

Nelson and her attorney alleged in the suit that the nurse who performed the procedure "was unlicensed to provide lip injections without the direct supervision of a physician and/or mid-level practitioner."

WFAA asked Nelson if she ever met with a doctor before the procedure.

"Never. Not once," Nelson said. "I was humiliated for such a poor decision."

Credit: Tancy Nelson
Tancy Nelson seeks medical treatment and is seen by a physician as her symptoms get worse.

Nelson's suit, however, was dismissed in September without prejudice when she and her attorney David Cole decided to not further their legal battle.

Cole told WFAA that the nurse never responded to the suit and that it began to become apparent that a judgment would be the only thing he and his client would have gotten, not monetary restitution.

WFAA is not naming the nurse or the salon because the suit is no more. Even so, WFAA contacted that nurse and she said she did no wrong.

Credit: Tancy Nelson
Nelson told WFAA that her lip had to be drained and that a plastic surgeon had to reconstruct some of it.

"Botox parties" or other affordable avenues to get a tighter face can be a risk that a lot of people don't realize they're taking.

Nelson said that the party she attended was cheaper than the average procedure cost.

Dr. Mark Anthony Daniels of Anderson Plastic Surgery in Fort Worth told WFAA that people seeking cosmetic procedures need to be diligent about who is doing it.

"If you're getting these fillers done, they need to be done by an expert," Daniels said.

"It's obvious that whoever did her injections, injected the filler into the blood vessels of her lip, and when that happens you get something called gangrene, or death of the tissue."

Nelson said she only has one piece of advice to share.

"If they're not a plastic surgeon, then don't let them touch your face," Nelson said.