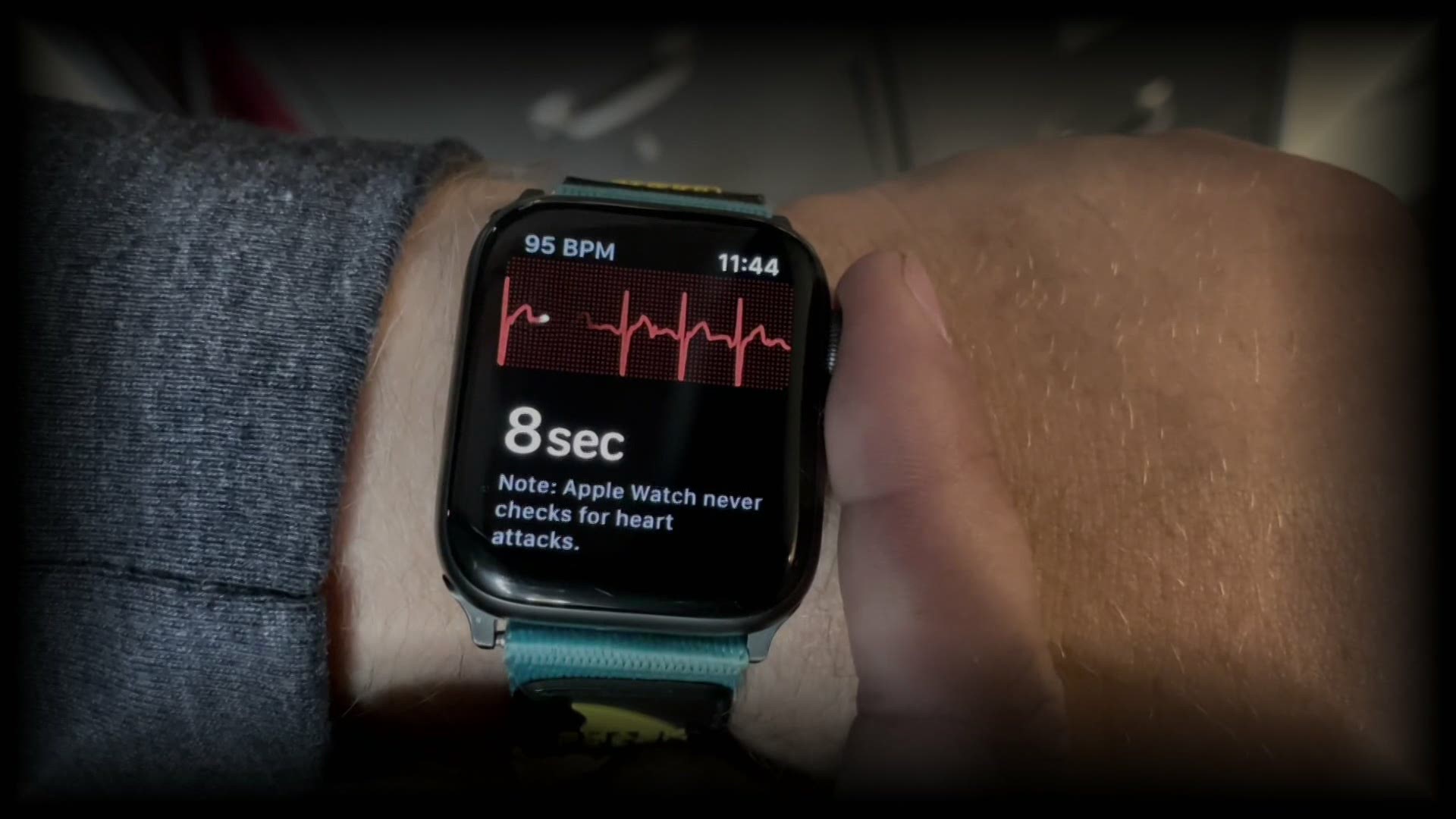 A Norton Shores woman is using every opportunity to tell other women to pay attention to even the smallest signs of heart trouble. This comes after she had a close call herself. What saved her might surprise you.

The old saying goes "an apple a day keeps the doctor away," but for Diane Feenstra, this Apple did much more than that.

"The day in question, April 22, I had 169 beats per minute heart rate even though the most vigorous exercise I had done was to walk up 12 steps. So I called my husband at work and said do you think this is concerning? And he said call your doctor," Feenstra told us.

An EKG at urgent care showed Feenstra had a recent heart attack, but hadn't realized it.

"Unlike men who feel an elephant on their chest many times, a woman's symptoms are very different. I had pain going down my left hand, I had a little swelling in my left foot, I had indigestion that I just explained away as acid reflux that I was experiencing as I got older. The biggest thing was pain in my shoulder and I figured I had vacuumed and put my muscles out of whack somehow," recalled Feenstra .

She explained away those symptoms but there was that one indicator that caught her attention. "I think God used that watch to alert me to the fact that my heart wasn't functioning properly, " she said.

The EKG showed there was no time to waste.

"The emergency room doctor said 'here are four baby aspirin, chew them, you are going to ambulance or your husband can drive you."'

Off to Meijer Heart they went, all the while Feenstra was in disbelief.

"I exercise, I eat right, Gary and I drink green drink almost every day that I make in our Vitamix with kale and all kinds of great nutrients so I honestly thought this is a mistake, it can't be, " she said.

After days of analysis it was determined she had a full blockage in what's known as the Widow maker artery.

A stent procedure was done and today she is thriving.

"The heart is building up it's stamina and I am so happy," said Feenstra.

She has this advice for other women: "Listen to your body and do not take for granted the fact that little symptoms like heart burn or pain in your arm or neck or jaw, don't think to yourself, oh there are other explanations. It doesn't pay to explain it away and not go for help."

Her Apple watch was a birthday gift from her husband Gary.

Thank goodness he did.

"It's such an easy thing to see what your heart rate is, had I not done that that morning who knows but I may have had another heart attack that would have been fatal," said Feenstra .

No gift can top this. The gift of time, and more life together.

According to the American Heart Association only 12 percent of people survive a heart attack linked to the widow-maker artery like Diane's, when it happens outside of a hospital.

The couple will celebrate their 48th wedding anniversary in August.

Interested in incorporating more healthy eating in your lifestyle? Diane Feenstra  was so kind to share the recipe for the "green drink" she and Gary have been drinking since 2010 that you see featured in the story.

GREEN DRINK in the Vitamix

Use the “smoothie” setting on the Vitamix, and after cycle ends, pour the drink into small jars, such as Starbucks 9.5-ounce frappuccino glass jars. Store the covered jars in a refrigerator for up to 3 days, filling very close to the top to preserve freshness. For longer storage, leave at least 1/2 inch at top for expansion, screw on cover, and place in freezer.