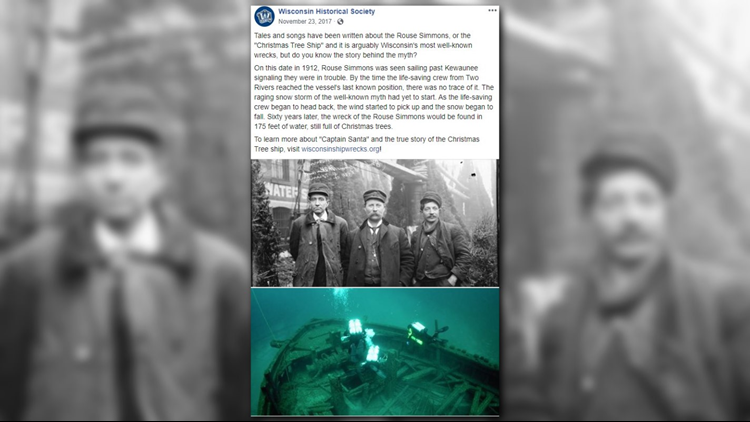 It's been 107 years since the Rouse Simmons sank in Lake Michigan on a journey from the Upper Peninsula to Chicago. The schooner was carrying thousands of Christmas trees, and it has now become known as the 'Christmas tree ship.'

What caused the Rouse Simmons to sink all those years ago, though, is still a bit of a mystery.

The ship left a dock in Thompson, Michigan on Nov. 22, 1912. Eyewitnesses said the ship looking like "a floating forest," according to the National Archives, carrying 3,000 to 5,000 Christmas trees.

The next day, a life saving station noted a ship indicating it was in distress, but a crew that went onto the waters to assist the ship was unable to locate it amidst poor lighting, heavy snow and mist.

Wisconsin Maritime Museum
The ROUSE SIMMONS sank in this month, 106 years ago. Join us as we remember the story of its sinking and celebrate our shipbuilding heritage at Christmas Tree Ship Day on December 8th. Photo by...

Over the next few days, the families of the crew realized the fate of the ship must have been grim. For weeks and months, the remains of Christmas trees washed up on the Wisconsin shorelines, the National Archives said.

The National Archives said that a number of factors could have led to the ship's demise: the poor physical condition of the ship battered by a November storm, ice on the ship and the heavy load of thousands of Christmas trees.

The Rouse Simmons was located in October 1971 by a Wisconsin scuba diver.

The sinking of the Christmas Tree Ship marked the beginning of the end for schooners carrying trees across Lake Michigan. Before this, Schuenemann would dock the boat in Chicago, hang lights on the mast, and sell trees and homemade wreaths from the ship. However, by 1920 that tradition had ended.