Consumers Energy and city officials in Grand Rapids provided an update Friday to the widespread power outages in West Michigan. 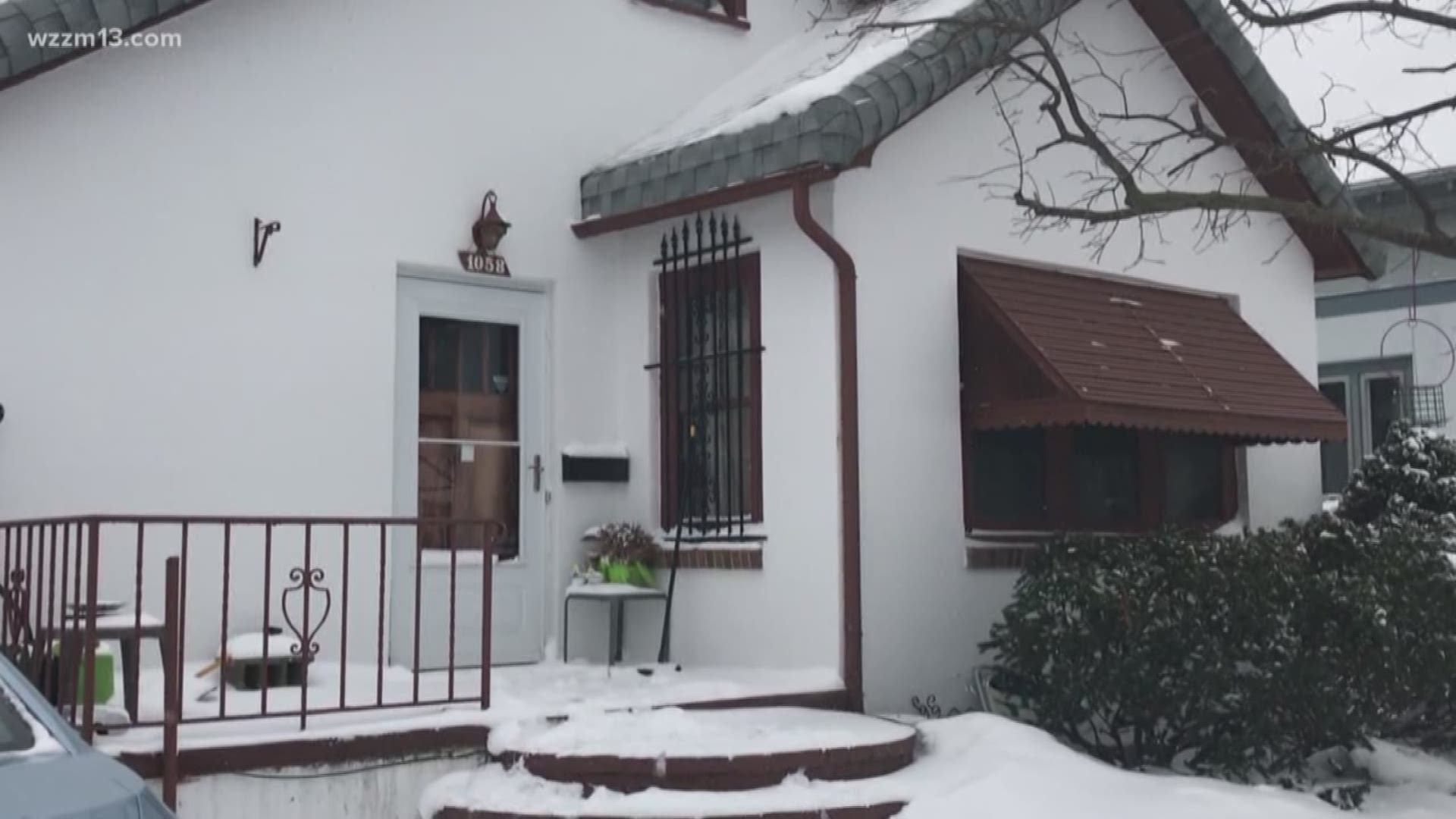 GRAND RAPIDS, Michigan — Over 122,000 Consumers Energy customers remained without power on Friday afternoon. Hundreds of crews have been dispatched to try and fix the outages, Consumers Energy said Friday.

City officials in Grand Rapids and Consumers Energy provided an update to the emergency response to ice storms and high winds that knocked out power to thousands of homes in the area.

A string of weather events caused the widespread outages. The first was an ice storm on Tuesday night, that was followed by more ice on Wednesday night, then high winds and freezing temperatures Thursday night.

Garrick Rochow, Senior Vice President of Operations for Consumers Energy, said that over 230,000 customers statewide have lost power because of the ice storm that hit Tuesday evening. As of 4:30 p.m., about 122,000 customers were without power, most of those in Kent County, Muskegon County, Montcalm County and Ionia County.

"We are working as quickly and safely as possible to restore power," said Rochow.

Consumers Energy is using their crews, contracted crews and mutual assistance crews in order to fix the outages. More than 1,200 Consumers Energy crews and contractors were joined by more than 200 out-of-state crews from Illinois, Indiana, Iowa, Kentucky, Louisiana, Missouri, Tennessee and Oklahoma.

Consumers Energy employees are pulling 16-hour shifts through the end of the week to assist with restoration.

About 64,000 customers should have their power restored by Friday, Rochow said. 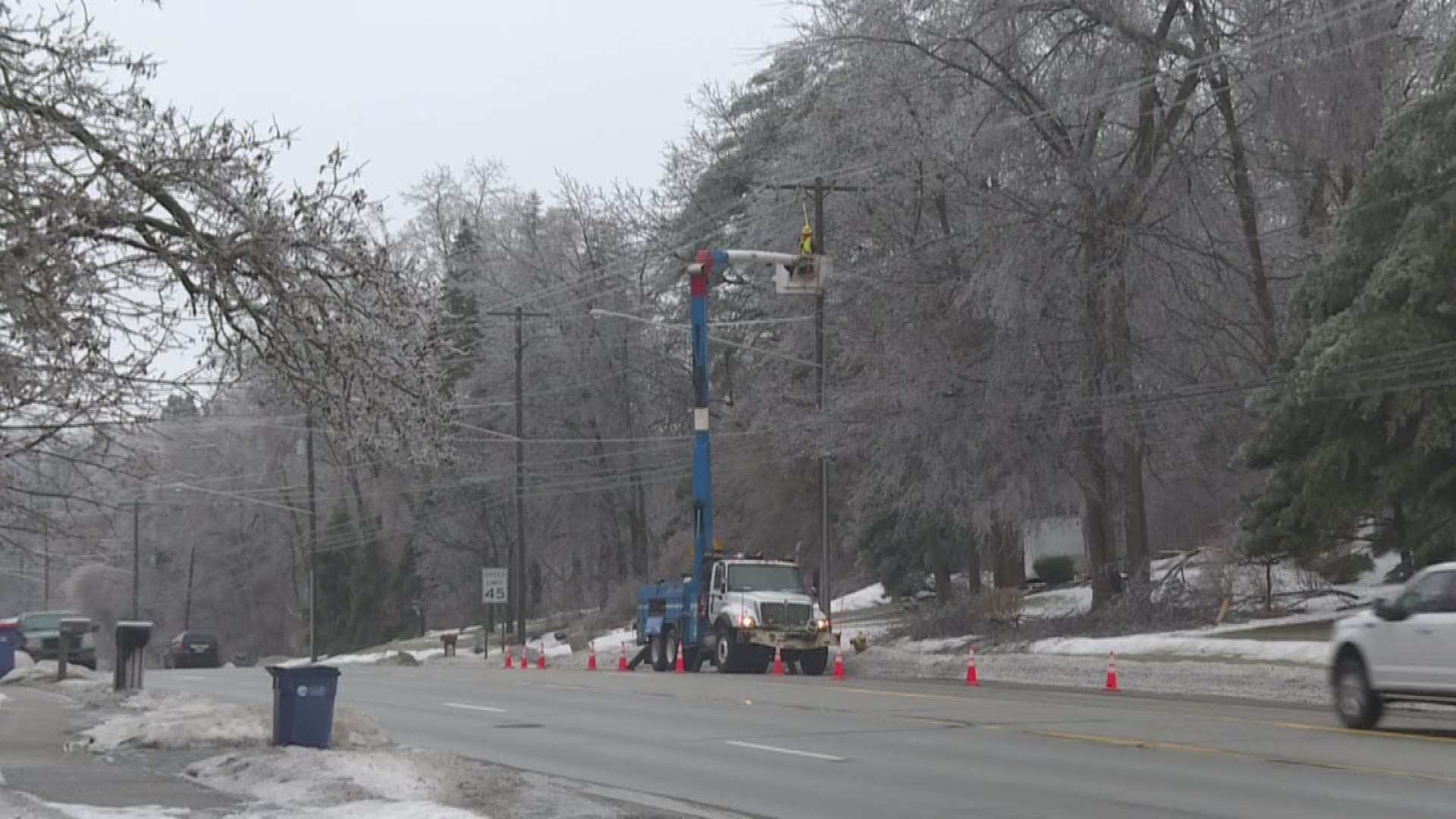 Rochow emphasized the importance of safety for the general public. He said at one point in the wake of the storm, there were 3,300 downed wires and they are still working to address some of those.

The city opened an Emergency Operations Center on Thursday in order to coordinate the response. The EOC is a centralized place where the City’s emergency response staff can coordinate efforts among City departments and with regional partners, including Kent County, Consumers Energy and American Red Cross, and monitor information in real-time.

Fire Chief Lehman said that that a half an inch of ice accumulated over the course of the storm, weighing down tree limbs and power lines. He said that 284 tree limbs came down and 409 wires came down within the city.

"A half inch of ice can weigh as much as 500 pounds on a span of wire," Consumers Energy Senior Public Information Director Roger Morgenstern said on Thursday.

City officials are assisting with helping the residents to emergency shelters that were set up to take in people who lost power.

The American Red Cross opened shelters at Union and Ottawa Hills High School as well as North Rockford Middle School and the Walker Fire Department for residents who needed warm housing during the outage.

Lehman said that those shelters had limited activity overnight, but about 70 people were heading to the shelters on Friday.

The Kent County Animal Shelter said that they would board pets for free for residents seeking emergency shelter in Grand Rapids.

"What we are realizing is that we are still going to be in this for another couple of days," said Lehman. "With temperatures dropping it is critical that people realize this isn't going to be a quick event and we need to get them into shelter where they can be cared for appropriately."

Lehman said that four city fire departments out of 11 were without power as of Friday morning.

City officials encouraged residents who are oxygen-dependent and require shelter because of power outages to go to Union High School.

Interim Police Chief Kiddle encouraged residents to follow general safety guidelines, including treating intersections with a broken stoplight as a four-way stay and be alert to downed trees.

Keep track of the outages on Consumers Energy's outage map.

Consumers Energy customers can sign up to get outage alerts and restoration times sent to a phone, email or text message, Text ‘REG' to 232273 or visit ConsumersEnergy.com/alerts.