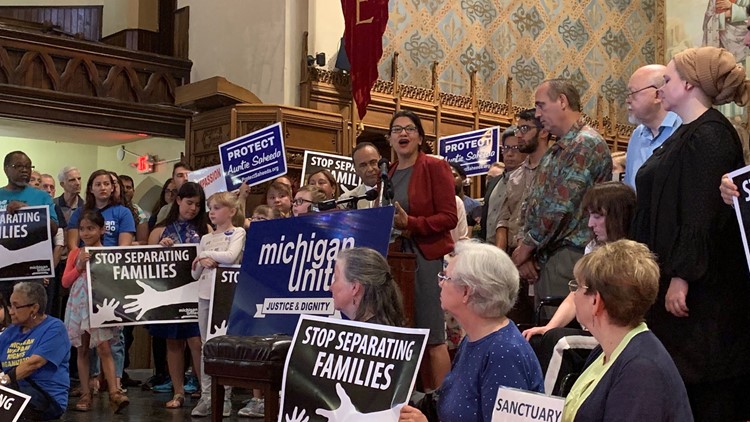 The lawmakers, along with two immigrant families and their supporters, spoke on the nation’s immigration policies at Central United Methodist Church in Detroit Wednesday afternoon. The church is just down the road from Fox Theatre—the location of the second round of the Democratic presidential debates.

Samad Nadeem, 21, talked about his mother, Saheeda Nadeem, who has been living in a Kalamazoo church for 17 months because she is facing the threat of deportation. Samad Nadeem said his family moved to the United States from Pakistan 14 years ago, but “convoluted” immigration laws stopped them from a legal path to citizenship.

Samad Nadeem's mother has been living in sanctuary for 17 months in a Kalamazoo church.
WZZM

Samad Nadeem is a DACA recipient.

“For 18 months, she has not been able to see the sunlight or feel it,” he said about his mother. “She chose incarceration for herself so she could have a shot at staying with her family.”

Saheeda Nadeem is currently living at First Congregational Church, which is led by Rev. Nathan Dannison. Dannison recently protested family separations by planting flowers and putting a cage around them.

Before finding refuge in the church, Saheeda Nadeem was a caretaker--first in an adult foster care home then for refugee children.

Samad Nadeem pushed the presidential candidates who are in Detroit for the debates this week to speak out about immigration.

"If any presidential hopeful wants a shot at our support, they need to vow that on day one of their presidency they will pledge to sign an executive order to end family separation at the border and right here in the United States,” he said. "I would like to hear immigration become more of a central focal point of all the candidates on stage. Because there is a very big crisis right at the borders and here within the country."

Tlaib, who represents Michigan’s 13th district in Congress, said the immigration system in America has deteriorated.

"When do we realize that our immigration system is so broken to the point that we have family members hiding at churches because they have no other option this is their home," she said.

The Congresswoman also spoke to the presidential candidates and her colleagues in the House of Representatives.

"We want comprehensive immigration reform that says, you get in line, you do it right, you can stay here in this country,” she said. "If you have U.S. citizen children, you deserve to stay with your children. That if you seek asylum, you have a process you can go through."

Ded and Flora Rranxburgaj are immigrants from Albania. Flora has multiple sclerosis, and for a decade they were able to get humanitarian visas. In the past two years, they were denied a visa and the Rranxburgajs have taken sanctuary in Central United Methodist Church. They have been living there for nearly two years.

"Moved into the church, claiming sanctuary because they had no other choice," said Rev. Jill Hardt Zundel of Central United Methodist Church.

Central United Methodist Church in Detroit voted to become a sanctuary facility in 2017. Ded and Flora Rranxburgaj have been living there for nearly two months.
WZZM

On the first night of the Detroit debates, immigration was discussed.

"We need to create a path for citizenship, not just for Dreamers but for grandmas and for people who have been working here in the farms and for students who have overstayed their visas," she said from the debate stage.

Most of the focus, however, was on ending the separation of families at the southern border and the question of decriminalizing border crossing.

Wednesday night, the debate will continue with 10 more candidates. It's possible those candidates might speak more on the issue of legal immigration.

Samad Nadeem said he would like to see sanctuary cities in Michigan, but he would also like a more permanent solution for his mother.