A WZZM 13 Watchdog team investigation is prompting questions how leaders in one West Michigan city are policing their community. 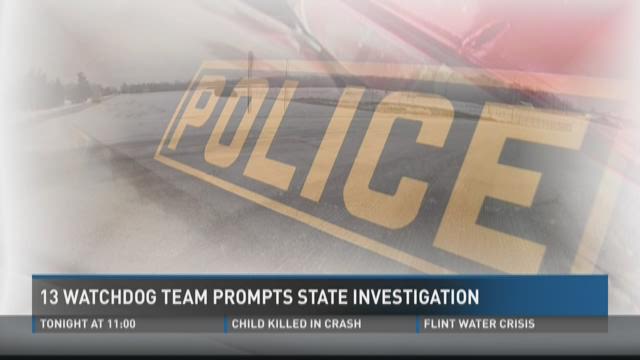 GRANT, Mich. (WZZM) -- A WZZM 13 Watchdog team investigation is prompting questions how leaders in one West Michigan city are policing their community.

We found evidence a reserve officer pulled over dozens of drivers in the town of Grant, in southern Newaygo County. What we found in this situation is prompting the state of Michigan to begin its own investigation of the city's police department.

There are very strict guidelines the Michigan Commission on Law Enforcement Standards has when it comes to certifying police officers. So imagine the anger that might result when somebody who isn't certified is allowed to enforce the law.

Ruch was one of three drivers Lt. Fragale stopped that Sunday. She was one of 144 drivers records show Lt. Fragale's stopped for speeding the past 18 months.

Lt. Fragale's Chief, Bob Mendham, says Fragale does a good job going out by himself to do traffic enforcement.

"He (Lt. Fragale) takes a lot more time out of his life to be up here than what his paycheck would say," Grant City Manager Ryan Rudzis told us.

Everything we saw about Lt. Fragale just screams police officer. He has a Grant Police Department business card, a full uniform and police car, a gun and a badge, plus the tickets he writes.

We told Ruch that she was given a speeding ticket by Reserve Officer Fragale, a man who has not been certified by the state to be a police officer.

So why would Lt. Fragale be thrown into the fire on traffic stops when he hasn't received training to be state-certified?

Rudzis says he believes Lt. Fragale is legally writing tickets but is now checking with an attorney to make sure the city is in compliance.

We turned to MCOLES in Lansing, the state's certification agency for police officers to define what a reserve officer can do.

"We would not approve them being out there," MCOLES Executive Director David Harvey said. "Reserve officers who are not trained MCOLES, licensed police officers and have not been sworn by an agency and given full authority as a police officer in a jurisdiction are essentially just a citizen," Harvey said.

Harvey says Attorney General opinions suggest a reserve officer should always be under direct supervision of a police officer.

Chief Mendham doesn't buy into that and says Lt. Fragale has the power to write tickets under city ordinance because he's already doing similar work in code enforcement.

"He has to be trained to operate that radar he's using and he's been through the class sohe's certified to use the radar," Chief Mendham said.

Others in law enforcement worry Fragale could actually be putting himself and the public in a dangerous situation. After all, Mendham told us Fragale has been told not to chase people. Complicating the situation is a 2015 Michigan Court of Appeals ruling that, in a way, allows people to resist a reserve police officer.

The 13 Watchdog team kept digging in this situation and found several instances of Lt. Fragale writing traffic tickets under state law, not local ordinance as Chief Mendham explained to us.

Harvey says in light of this 13 Watchdog investigaiton, he is going to begin his own investigation to see if the City of Grant violated the Commission on Law Enforcement Standards Act.

Left in the middle are all the people who got tickets from Fragale. Some have suggested every ticket the reserve wrote may be invalid.

"I think they very well may," said defense attorney Ed Sternisha. "And it's not just about getting their money back."

Ruch says now with this information in hand, she's ready to join with anybody and everybody involved to fight city hall.

"Get a good lawyer and at least get our money back and our names cleared," Ruch said.

The two city leaders in Grant told us in light of our investigation they have stopped allowing Lt. Fragale to write speeding tickets pending what we believe will be a state investigation into the police department's practices.