Fighting traffic tickets: Why it's a losing battle in Grand Rapids court

The WZZM 13 Watchdog team wants to know why the magistrate in charge of administering speeding citations in Grand Rapids District Court isn't asking questions about the validity of speed limits. 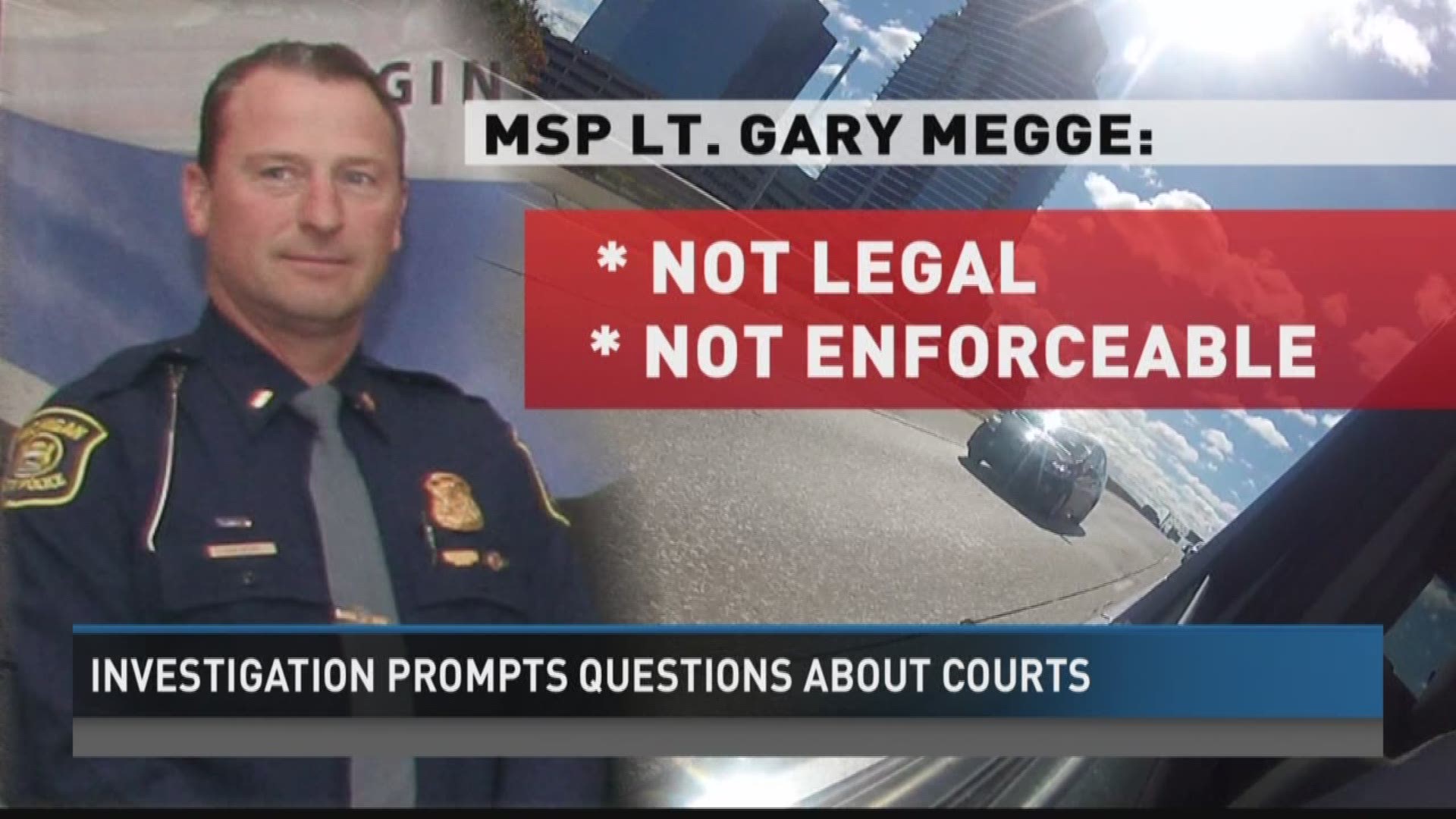 Ten years ago, state lawmakers passed a new to try to force cities to set speed limits based on science, not on politics. In November 2015 we found many city leaders have largely ignored the law and continue to have speed limits the Michigan State Police considers to be unenforceable.

That's the case in Grand Rapids, where we found multiple speed limits were not scientifically set. In all of the streets we studied, more than 95 percent of free-flowing vehicles were going at a rate above the speed limit.

Brittany Grummet went to court and said she knew she was going to lose. She challenged her speeding ticket, and it didn't go very well for her.

"I think it's really unfair," Grummet said. "The 25 mph speed limit down there, it shouldn't be that."

In Grummet's hearing, the Grand Rapids police officer told Magistrate Steve Brunink he got a reading on Grummet's car. But Brunink never asked the officer how the speed limit was set on Michigan Street NE near Houseman.

"It's a losing battle because the cop's always going to win," Grummet said.

We also watched David Pellerin lose in traffic court. He was caught going faster than 25 mph at one of Grand Rapids most popular speed traps, Seward Avenue near Leonard Street NW.

Brunink again didn't ask the officer how the speed limit was set on Seward.

"It should have been at least 40 mph," Pellerin said.

In a couple of cases we studied across the state, drivers have successfully proven that the speed limit was not set correctly. If the speed limit is deemed not correct by a magistrate or judge, the default 55 mph speed is used.

Pellerin and Grummet were convicted of a civil infraction weeks after our 13 Watchdog investigation questioned the validity of speed limits in Grand Rapids.

But it's clear Brunink may not have seen our story.

The science of speed limits

Although Grand Rapids city engineers didn't do the science behind the two roads in question in this story, we decided to do it for them.

Walker came back in January 2016 to test Michigan Street NE and Seward Avenue NW on behalf of the two who lost in court.

On Seward, the posted speed is 25 mph. We found in our speed study 97 percent of drivers were not obeying the speed limit. In addition, if the city of Grand Rapids did what some suggest they're supposed to do and set the speed limit at the 85th percentile of a speed study, the speed limit would change from 25 mph to 40 mph.

On Michigan, the posted speed limit is 25 mph as well. It could be considered a 25 mph zone for a business district. We found in our study that 99 percent of drivers were disobeying that speed limit. The 25 mph could be changed to a scientifically-based 35 mph.

That's a rate of one every 81 days.All of those "wins" were due to court technicalities not questions about speed limits.

Michigan State Police Lt. Gary Megge told us in November several speed limits in Grand Rapids are illegal and unenforceable. He said there are only two ways a speed limit can be set: through an access count of driveways and intersections in an area or through a speed study.

In November, we found the city of Grand Rapids has little to no documentation how speed limits are set on their streets. Yet, we watched case after case after case where the legality of a speed limit was never questioned by the court system.

Now, the director of the Michigan State Police is coming forward to the 13 Watchdog team to make a second statement from the organization: that speed limits should be based on science and engineering and not much else.

"I think it's the right thing to do," Director Col. Kriste Kibbey Etue said.

Attempting to get answers

We wanted some answers from the justice system about the court process.

We asked Brunink to do an interview, but he declined and walked away from us.

His boss, Chief District Court Judge Jeanine LaVille, declined, too, and wouldn't answer the prepared questions we were asked by LaVille to prepare for her. But, in a way, we got some answers from a magistrate in a neighboring District Court how the system is stacked against drivers who dare to question the validity of the speed limits.

"If they want to get into that sort of thing then they need to take the next step," 59th District Court Magistrate John Jackson said. "They have to take that matter before the judge and he's more in the position to do something with that."

In other words, in the cities of Grandville and Walker, you are going to lose if you tell the judge the speed limit might be incorrectly set and only through a time-consuming potentially-costly appeal can you clear your name of a $120 ticket.

Our investigation also found other issues in Grand Rapids District Court: the fact speeding tickets are written under local ordinance, but we noticed people were being convicted under state statute.

David Tarrien, a lawyer and professor at Cooley Law School independently took a look at the situation for us and wonders whether the court system is being fair.

"The reason it hasn't come up is nobody has pushed the envelope," Tarrien said.

Tarrien is curious why the city's attorney is using MCL 257.627 2(c) having to do with land platting to say the city is immune from setting speed limits based on science.

"There's no authority that's validated that," Tarrien said. "This hasn't been tried and there's no opinions from the Attorney General and the basis for the authority appears to be scant."

Tarrien also said when there's a conflict of law between the state and a local government, often the state authority wins.

We found court precedents set in speeding cases in Louisiana and California that suggest state law often trumps local decisions when it comes to setting correct speed limits, but again, there's no direct case law about this in Michigan.