In the body cam footage, the officer tells the man that he was driving too fast on Fulton Street. 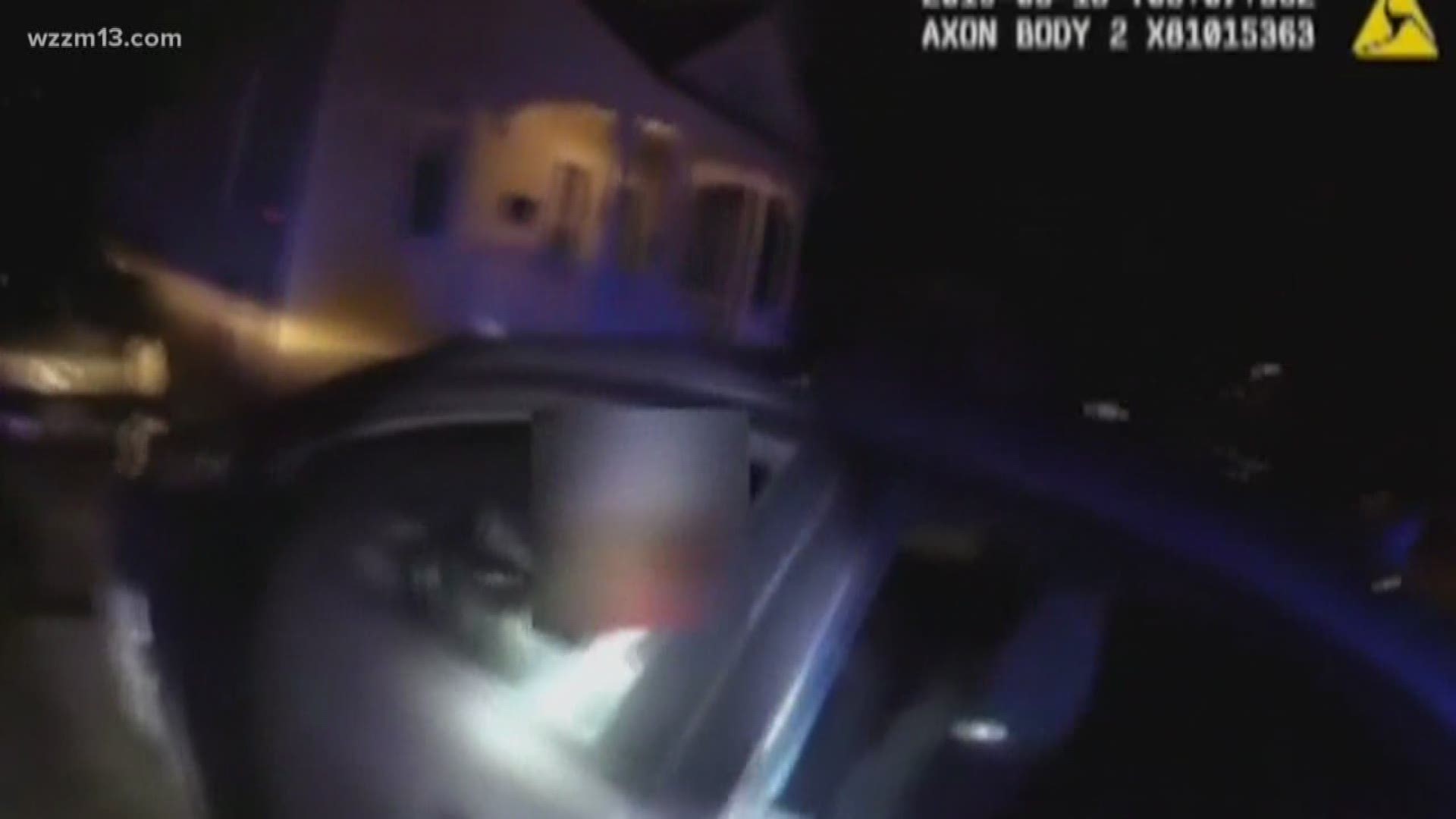 GRAND RAPIDS, Mich. - The Grand Rapids Police Department released body cam footage of an arrest that gained attention because an officer was filmed hitting a man repeatedly on the leg. That officer was placed on administrative leave pending an internal investigation.

The incident occurred on March 17, and video footage was taken by a neighbor showing the officer punching the man who was pulled over in a traffic stop near National Avenue NW and California Street NW because police said he was speeding.

In the body cam footage, the officer tells the man that he was driving too fast on Fulton Street. The officer asks the man to get out of the car. 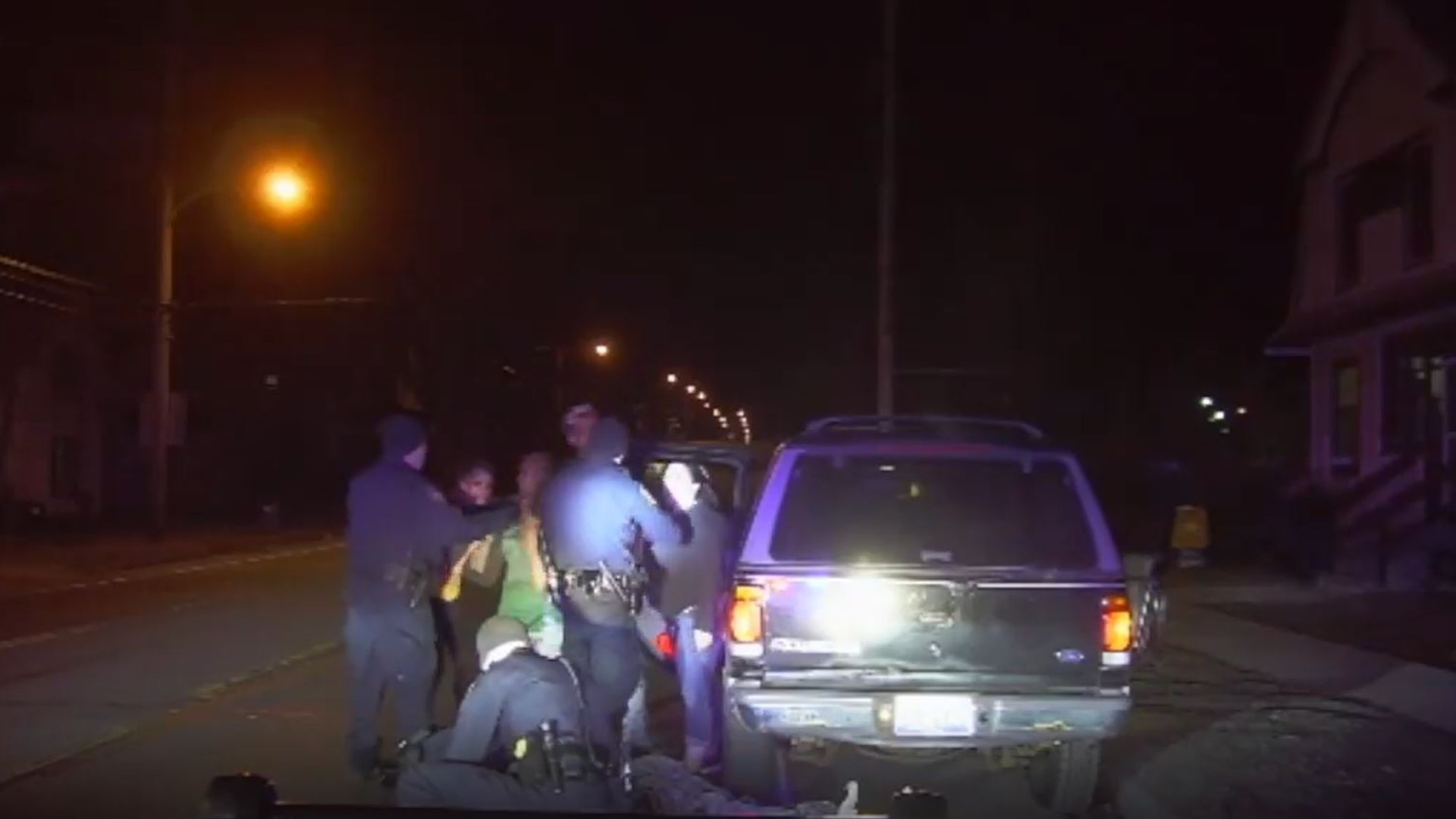 “Why do I got to step out of the car,” the driver asked.

“Because you don’t have your license on you; you’re under arrest” the officer responds.

“You’re refusing to obey a lawful command, and now you’re under arrest,” the officer said.

The driver also tells the officer that his son is in the car. Kent County Commissioner Robert S. Womack told 13 ON YOUR SIDE the child is 2 years old.

The man continued to refuse to get out the car, questioning why he is getting arrested. At a press conference in the days following the incident, Interim Police Chief David Kiddle said "The driver started his car, rolled up his window, started honking his horn and reaching around inside the vehicle where the officer could not see.”

The situation escalated, and the officer broke the man’s window and drew his weapon. The man continued to honk his horn.

At that point another officer arrives, and the first officer tells him, “He’s got a kid in the backseat.”

The officer opens the door to the car, and the man yells, “Let me get out,” while the second officer says, “you’re going to get Tased if you don’t get out.”

The driver gets out of the vehicle, and the body camera is knocked off the officer. The video still shows the man getting Tased and falling on the ground.

“Put your hands behind your back!” the second officer yells at the driver and he cries out “Alright!”

In the video the second officer tells the first one to Tase him again, and the sound of a Taser and the man yelling can be heard. Body cam footage from the second officer shows the man on the ground, curled up while police are telling him to put his hands behind his back.

It’s at this point that the second officer starts hitting him while the first officer turns him over and puts his hands behind his back. The officer punches him repeatedly until he is placed into handcuffs.

In the department’s original response to the arrest, Kiddle said he had strong concerns about the actions of the assisting officer who was "quick to escalate the situation beyond the point that was necessary" when he starting punching the driver on the leg.

Kiddle said the officer used unprofessional language during the arrest. “Regardless of the driver's behavior and language, we have standards of professional conduct, which clearly were not upheld in this situation."

Tuesday, GRPD released body cam footage of this arrest as well as another one that gained attention for use of force. In that incident from March 26, police said that a traffic stop resulted in two people being arrested for outstanding warrants, and four people being charged with resisting and obstructing a police officer.

Cellphone video showed an officer striking one of the resisting suspects on the leg, which Kiddle described as a “distraction and pain technique to try and get the individual under control.’’

GRPD said that as with all use of force arrests, they are both being reviewed by the Internal Affairs Unit, Labor Relations Department and the police chief.