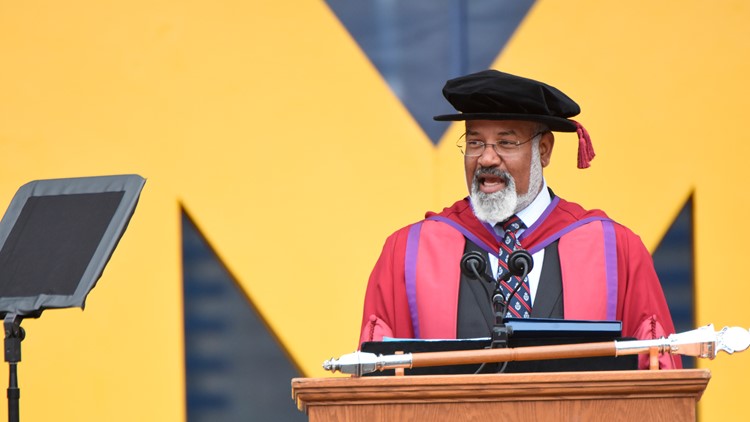 Photo by: AP
File-This May, 4, 2019, file photo shows University of Michigan Provost Martin Philbert who has been placed on administrative leave during an investigation into allegations of sexual misconduct, the school said Wednesday. Philbert speaks during commencement exercises in Ann Arbor, Mich. (Max Ortiz/Detroit News via AP, File)

ANN ARBOR, Mich. — The University of Michigan has removed a faculty member from his job as chief academic officer over sexual misconduct allegations that have been made against him.

Martin Philbert has been on paid leave since January when several allegations were made.

He lost his job as provost on Wednesday but will remain on the payroll as a faculty member with tenure protection while the investigation continues.

The university says Philbert was notified in a letter from President Mark Schlissel.

The investigation will determine if the school ultimately attempts to remove Philbert as a faculty member.

Philbert joined the University of Michigan faculty back in 1995.

Schlissel said the university received several allegations of sexual misconduct by Philbert between Jan. 16-17 and launched an internal investigation. An outside law firm has been hired to look into the claim.

More Investigations on 13 ON YOUR SIDE: