The jurors went into deliberation just after 5 p.m. on Wednesday. They returned twice with questions before reaching a verdict about 6:30 p.m. 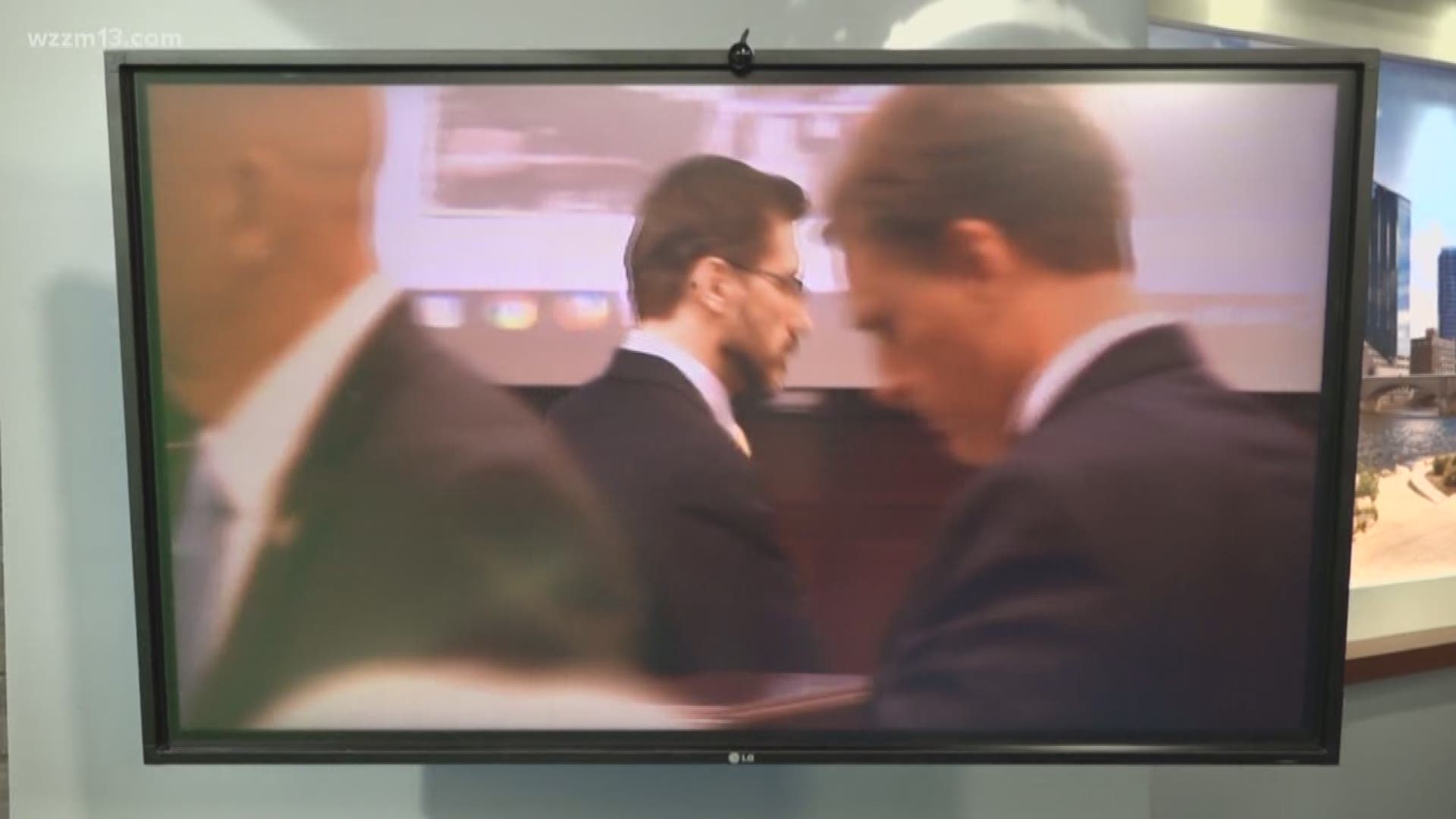 MUSKEGON, Mich. - A Muskegon County jury this evening found Jeffrey Willis guilty in the 2013 abduction and murder of a Norton Shores gas station clerk whose body has never been found.

Jurors deliberated about 90 minutes Wednesday before finding Willis guilty in the death of Jessica Heeringa, a young mother whose disappearance more than five years ago garnered national headlines.

Willis, 48, showed no emotion as the verdicts were read at 6:40 p.m. He faces mandatory life in prison when he returns to Muskegon County Circuit Court for sentencing on June 12.

People in the gallery sighed in relief. Sister of Rebekah Bletsch is sitting up front, looks like she is in tears. Judge is now thanking the jury for their service. They are officially discharged. @wzzm13

On the other side of the room, emotions ran high from the prosecutor's table and just behind it.

After the verdict came down, Norton Shores Lt. Michael Kasher, the lead detective on the case, became emotional.

"To me, it's something that I knew all along for the last two years, at least," Kasher said.

"Five years ago, April 26, 2013 about midnight, it's what I kind of felt in my stomach about what had happened...Jessica being abducted and today proves that case," Kasher said.

Willis is already serving a mandatory life term for the June, 2014 murder of Rebekah Bletsch, who was fatally shot while jogging.

He is also accused in the 2016 abduction of a teenager who escaped Willis' van, sought help from a nearby resident and went to police, leading to his arrest. The teen, who was 16 at the time, testified at the two murder trials.

Muskegon County Prosecutor D.J. Hilson told jurors that Willis had computer files containing information about Bletsch and Heeringa. Although Heeringa's body has not been found, Hilson said there was ample evidence to convict Willis in her death.

Both the prosecution and defense rested their cases Wednesday, May 16. Willis did not testify and no defense witnesses were called. But he did write down questions for Johnson to ask the prosecution's final witness, Lt. Kasher.

With jurors out of the courtroom, Johnson told the judge that Willis directed him to ask a line of questions that did not align with his defense strategy.

Judge William Marietti asked Willis if he understood the potential ramifications of not following his defense attorney's advice.

'Yeah, yes, I understand,'' Willis responded. With that, the jury was brought back in and Johnson asked questions supplied by Willis. The packed courtroom fell unusually silent for Willis' response.

Willis' questions were aimed at the integrity of two officers who initially came to his home during the Heeringa investigation.

Following the verdict, Lt. Kasher said he "welcomed" those questions from Willis. "People always think they know more about our job as police than we do," Kasher said.

When the jury left for lunch, Johnson asked the judge for a directed verdict, which essentially asks the judge to prevent the case from going to the jury due to insufficient evidence.

Marietti denied the request. But he said the most damning evidence was a laser light cover from a handgun linked to Willis found outside the ExxonMobil station where she worked. Also found was a blood stain in the parking lot that came from Heeringa.

"That puts him [Willis] in the bulls-eye of circumstantial evidence," Marietti said.

During closing arguments, Hilson reviewed all the evidence presented, driving home the point that Willis had an affinity with this type of killing.

"Ultimately, they all end the same way, they end up dead," Hilson said. "Willis was fascinated by toolbox serial killers."

Johnson started his closing argument by shouting 'LIGHTS ON, LIGHTS OFF," referring to the light outside the ExxonMobil station.

"When you're buying heroin, you'd turn the lights off so nobody can see what you're doing," Johnson said.

Johnson offered jurors a number of theories about Heeringa's disappearance, including that she overdosed or ran away on purpose.

People in the gallery shook their heads, including Jessica Josephson, the sister of Rebekah Bletsch.

Heeringa's family has been absent from court room throughout the trial -- the family continues to post on their public Facebook page with the hashtag #NoJesNoJustice.

"Unfortunately, we are not quite where we want to be, we don't have Jessica home, yet," he said.

Kasher said he and other detectives will not rest until she is found.

"Hopefully, Jeff Willis decides to be a man about it and point out where she is at," Kasher said.

I am not expecting him to be human about it, but there is always hope."