A Michigan Senate bill would bring the fight the opioid crisis in public libraries. 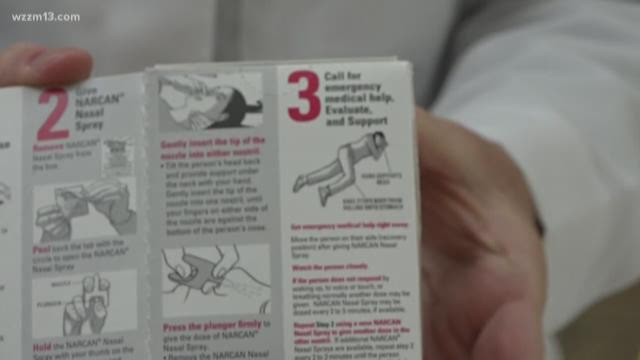 A state senator wants to combat the growing opioid epidemic by allowing all Michigan libraries to carry and administer anti-overdose medication with limited liability.

"Libraries are the perfect place to study. They're quiet, but, unfortunately, they seem to be a good place to shoot up," said State Sen. Rick Jones, R-Grand Ledge. "The librarians reach out and asked for help, so they could administer Narcan and save lives."

Narcan is the common brand of the Naloxone, an opioid antagonist that reverses the effects of an overdose. Kent County recorded 121 overdose deaths in 2017, up 30 percent from 2016, but results are expected to increase with 43 pending cases.

Earlier this month, a state lawmaker introduced a bill that would require overdose training for police officers. The bill Jones introduced Thursday, Feb. 15 would provide criminal and civil protections for library employees that administer Narcan to customers experiencing overdose symptoms.

"When it happens we want to be able to respond," said Lance Werner, director of Kent District Library. "There's nothing worse than sitting there, helplessly, watching someone suffer and die, not being able to intervene."

Kent District Library started carrying Narcan and training its employees in administration six months ago, following a non-fatal overdose at one of its branches.

"The Narcan is a no-brainer," Werner said. "Employees aren't required to intervene. But if they choose to do so, they have the tools necessary to do it. They have the training, and they have the drug itself."

"It's very simple to both administer Narcan and learn what the signs are for when you might want to use it and why you would want to use it," Bernstein said.

"We have had different health crises at the library, and, of course, our staff are not health experts," Ehlers said. "The bill previously lacked clarity around legal responsibilities and protections for libraries. And now this bill will eliminate that."

Grand Rapids Public library reported a fatal overdose at its downtown location in January 2015 and a non-fatal overdose in May 2016.

The libraries want to be their for the public, Werner said.

"We don't see the people coming into the library as patrons or customers," he said. "We see them as family. We have your back."

The bill should pass through the system with bipartisan support, Jones said.

"Nobody wants people to die," he said. "Everybody is aware of this horrible opioid problem we are having right now. And we're looking for solutions."